Sovereign debt – all crap
Who could have expected this?
Socialism’s toast!
Contrarian Valentine’s Day
While I’m tempted to wish you a Happy Valentine’s day, dear reader, I have no doubt that you won’t be running with the herd tonight for dinner and a dozen roses.
No sir, not here – when my wife insinuated that I’d “better have something planned”, I went and booked dinner reservations for tomorrow (Monday) – got last minute reservations at a top restaurant, no problem.
Somewhere, Humphrey B. Neill is smiling – it indeed pays to be contrary!
The Debt Debacle Rolls On
Given that the markets have rallied with record strength over the last 10 months, isn’t it amazing at the level of negativity that persists? Kinda confirms my feelings that we’re in the eye of the storm here.
While the buoyancy of the markets has brought some good news with it, it’s not really been anything to get all that excited about. More relief that the financial world is not ending, than anything else.
I suspect that relief will ultimately prove to be premature.
Like an attractive, but insane, girlfriend, there appear to be some nasty skeletons left in the closet. The credit crisis was cute – like OK, she smokes a pack of cigarettes a day, two on Sundays. Now we’re about to find out that this bitch is a full blown heroin addict…
Sovereign Debt: Socialism’s Grand Finale
The next “shoe to drop” appears to be sovereign debt. I guess we should have expected this, as the 20th century’s infatuation with socialism comes to a head once and for all.
It turns out that Maggie Thatcher was indeed correct when she famously said “the problem with socialism is that you eventually run out of other people’s money.” But I wonder if Maggie foresaw her United Kingdom, and our United States, continuing along the trend towards greater socialism, and less capitalism.
Yes, the Thatcher/Reagan revolution, whatever effect it had at the time, appears to be as dead as a door nail today. And granted, the size of the US government continued to grow under Reagan, so I’m not sure if we can or should count that time as a countertrend rally.
In any case, government tax receipts are falling around the world, and there is a lot of sovereign debt that is going to go unpaid. This is highly deflationary, because debt that used to exist will simply float away to “money heaven.” Creditors will discover that their assets are now completely worthless.
First Dubai, now Greece – the dominoes are starting to topple. Here in the good old U S of A, the bond markets continue to fund record deficits at the federal level, but our two most socialistic states – The People’s Republics of California and New York – are toast. Spreads are rising on CA’s credit default swaps – the vultures are starting to circle.
The types of budget cuts that each state needs to make are politically infeasible. So, we’ll likely see the states get bailed out, but eventually, they’ll default on their debt. Poof – off to money heaven.
I work in Sacramento – and yes, I greatly enjoy the irony of being a libertarian/anarchist in this town. A funny thing happened when the Governator started furloughing workers, telling them to stay home 3 days a month – nothing, really. It’s dead downtown on Fridays, sure, but if there’s any output being missed, I honestly can’t tell.
I suspect you could furlough most of the state government permanently, and nothing would really be missed either. Sure you’d have some short term adjustment, but the private sector would step in and perform any services that were seriously needed or missed. I doubt we’d miss much.
Go Long Responsible Governments, Short Socialism
Our friend Brian Hunt pointed out in his always excellent Market Notes that there’s money to be made in shorting socialism:
For a picture of this tailwind, let’s look at the past year’s trading in the iShares Singapore (EWS), a basket of Singaporean stocks. While the high-debt, high-tax, high-regulation economies and stock markets of Europe have suffered major declines in the past month, Singapore’s market has declined just a few points. This trend of “Asia up, Europe not-so-much” is going to last the rest of your life.

Source: DailyWealth
The Onion: US Stages Fake Coup to Wipe Out Debt
This is hysterical…

Shout out to my good friend, and past guest author, Jonathan Lederer for sending this along.
Paging Dr. Copper
Another good tip from Hunt – copper is breaking down. He’s got a nice chart at the bottom of the page that clearly shows a break of copper’s upward trend.
Yes Dr. Copper, the commodity this is said to have a “PhD in economics”, is starting to feel under the weather. An ominous sign?
Well if China was doing OK, you’d expect to see copper humming. So we’ve got Chinese indices breaking down in tandem with copper – uh oh.
Stratfor’s Take on Greece and Europe
For the geopolitical take and implications, you can’t beat Stratfor’s George Friedman. Here’s a video they released earlier in the week, discussing the Greek fiasco:
The Funniest Video of the Week Not From the Onion
It’s from CNBC, of course!
Perhaps a contrarian take on the Greece situation, this joker says the solution is an “operational one” – Europe should print money and hand it out!
Hat tip to friend and reader Carson for finding this beauty.
My Trading Activity – Still Short the S&P (Twice)
Still short baby – these positions are keepers! Not a bad time to initiate a short position either, I think. Markets were up last week, a nice little countertrend rally. 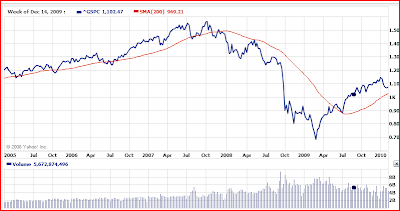 The S&P turns down.
Have a great (short) week in the markets! Comments are always welcome and very much appreciated.