Why the “Reflation Trade” is Being Exposed as a Complete Fraud

The “reflation” trade
Just a standard retracement?
The bear may be back!
They Are Still “All the Same Markets”
Like many of our astute readers, I was not impressed by the reflation trade. While the strength of the rally was indeed quite substantial, when you sum it up, it was a mirror image of the rally that occurred in 1930.
We mused on January 3rd of this year that we hadn’t yet seen anything to invalidate the “All The Same Markets” hypothesis (which is courtesy of Bob Prechter). And the tailspin that the markets have begun seems to further validate this.
The S&P has dropped nearly 100 points in the last few weeks! 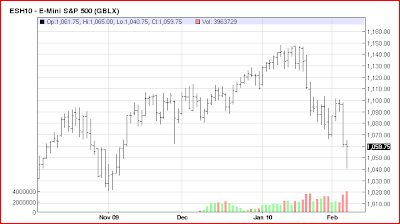 Source: Barchart.com
How about gold, everyone’s favorite “safe haven”? Since it’s December top (marked by it’s celebrated status by the Today Show), it’s been a safe trade alright – for gold shorts, that is! 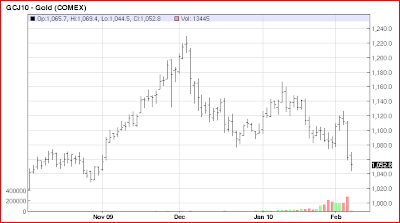 
How’s oil done? After all, the world’s running out of it, and China needs it… 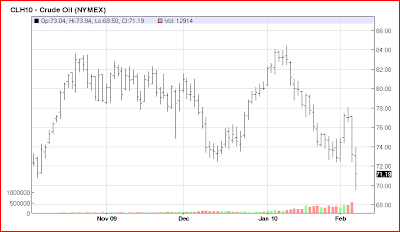 
As Mark Twain may say, were he an investment blogger alive today: “These charts may not be exactly the same, but they sure rhyme like hell!”
Their inverse? The dollar, of course! In the January 3rd column, we identified the dollar as the linchpin to this whole equation. Since that time, it’s looked quite frisky – proving that these other markets can’t do “jack” while the dollar is rallying – just like 2008. 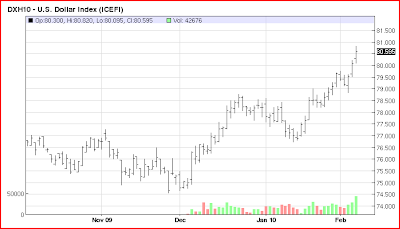 Is that a roll of silver dollars in your pocket…or are you just happy to see me?
(Source: Barchart.com)
In summary, all we’ve seen in the reflation trade was a typical retracement, in which markets usually retrace 50-62.5% of their previous losses.
Why does this happen? Honestly I don’t have a clue – it just seems to be the way of the financial universe (and possibly the universe in general).
So where – and when – will this end? Well, if these were in fact mere retracements we’ve witnessed, then you’d expect that new lows will be registered by the time this swing down is over. Which would translate to the S&P below 600, Gold below $700, Oil below $30, and so on.
Moral of the story, I think the two best moves right now are to: 1) Get safe, and 2) Get short (with speculative capital).
Near term we could certainly see the bounce that started yesterday afternoon continue up – maybe bringing the S&P around 1100 – who knows.
What would invalidate my cheery outlook? New highs in the S&P and other markets would indicate I’m either early in my downtrend speculation, or wrong. But I do think the most probable direction is now DOWN.
What’s “The Man” Robert Prechter Saying Right Now?
Last week, CNBC interviewed Bob Prechter – here’s the interview:

As I’ve mentioned before, some regard Prechter as a bit “out there”, which is actually a very desirable quality in an investment guru, I think.
I started following him about a year ago on the recommendation of a fellow colleague/investor, because from what I can tell, Prechter is the only guy who nailed the Crash of 2008 to a tee, when most of the rest of the investment world was blindsided.
Some more recent guest articles by Prechter:
Colts -5.5
vs. Saints – Who Ya Got?

It will probably come as no surprise that my philosophy in sports speculation is similar to that in the financial markets – part technical, part fundamental. And like the finance world, I claim no particular skill at all. I cannot claim I’ve won more than I’ve lost in sports betting.
I do, though, enjoy the study of sports handicapping, and hope that one day I can develop a system that can make money consistently.
As I pen this column on Saturday, the Colts sit as 5.5 point favorites over the Saints. A decent sized spread but still under the first major point of traditional resistance, 7.
The betting masses like the Colts – with 57% of public bets falling on Indy’s side. That’s not too surprising, as the Super Bowl is far and away the largest public betting game of the year, and we’ve got Mr. Manning, a golden boy for public betting. What average Joe would bet against Peyton?
While that may pique our interest, my inner contrarian has been disappointed with the relative lack of homage to King Peyton in the media. Meanwhile, the stories about New Orleans and how the Saints “can actually win this one” may be contributing to the line staying south of 7.
Turning to the “fundamentals” – like evaluating individual stocks and companies, this is more art than science.
I’ll make the case that the Colts are the better team, based on a few factors:
That said, is the spread large enough to bet on New Orleans “keeping it close?” I don’t think so.
First, you should only bet an underdog if you believe they can actually win the game. I think that is possible, but not likely, in this case. Blowouts occur more often than people realize.
So, the five and a half is not enough to scare me away from the pick. Hence, your official 2010 Super Bowl gambling pick is:
Colts -5.5 over Saints
How’d we do in previous years?


My Trading Activity – Short the S&P, Times Two!
After watching the markets bounce on Monday and Tuesday, I thought it’d be an interesting time to “punt” on one more short S&P position on Wednesday.
My thinking was that, if this was a near term bounce, which I thought it was, it looked to be about finished.

Pyramid time! Fortunate timing on the 2nd S&P short, at least for now.
Well that turned out to be pretty good timing, at least thus far, as markets plunged on Thursday. And yet again on Friday, despite a late rally back up above the even mark for the day.
I’d say I’m more confident than before that the trend of the markets has indeed reversed. So, I’ll look to carefully add more positions here as the downtrend continues.
Caution remains the order of the day, though, until we breach the 200-day moving average on the downside. My overall strategy is to cautiously get short during the first half of the bear move, and then ride things when the markets completely capitulate, with a final target below last March’s lows.
And on that upbeat note – have a great week in the markets! Comments are always welcome and very much appreciated.