The severe supply/demand imbalance in sugar fundamentals has propelled sugar prices to a 28-year high. The big driver of the rally has been India – which, as we reported earlier this year, has turned into a net importer of sugar.
As you can see below, sugar prices are starting to go “parabolic.” Commodity rallies typically end with a big blow off and stories like this one by the mainstream financial media, questioning where the world will ever find enough sugar to meet demand. 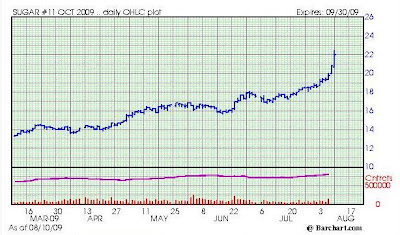 Sugar mania is running wild!
(Source: Barchart.com)
If you are an adventurous trader, you could initiate a long position and try to ride this spike up for as long as it goes. I personally do not have this stomach for this, having been burned one too many times on the inevitable reversal. Parabolic spikes rarely end quietly.
I hope that you, Dear Reader, played this trade better than I did. Since writing on March 1 that sugar could stage an impressive rally, my follow through trading was quite poor…to say the least!
Ah well, if you missed this rally – be patient. We should get another shot at it – at least according to our favorite sugar guru Jim Rogers, who told Bloomberg:

“Sugar is certainly going to go much, much higher during the course of the bull market,” Jim Rogers, chairman of Rogers Holdings, said in an Aug. 6 interview in Singapore. “Sugar is still 70 percent below its all-time high and not many things in life are 70 percent below what they were in 1974. Sugar has a wonderful future.”

What’s the easiest way to invest in agriculture if you don’t trade futures? Check out our recent piece: 5 Easy Ways to Invest in Sugar…And Other Agricultural Commodities.