Still All The Same Markets – A Picture Worth a Thousand Charts

This shot says it all – the “all the same markets” hypothesis is still in play. 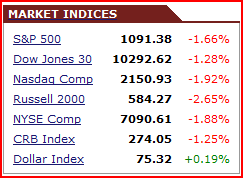 Why bother with diversification when all the markets move in tandem?
(Source: Barchart.com)
Hat tip to Robert Prechter, who I believe was the first to point out the increasing correlation between every asset class, as far back as 2004. He postulated that the markets were being driven by global liquidity flows:
Since March, we’ve seen liquidity increasing, and the dollar dropping – still playing according to script. So I think we have to assume this relationship is still in place, until proven otherwise.