So Long, Cotton…I’m Just Too Wary of Deflation

I have to admit – I think the Great Deleveraging permanently seared my psyche. I haven’t been the same since.
It’s for the best. Until you live, and invest, through an event like that, I don’t think you can appreciate the awesomeness of the destruction. A history book just doesn’t do it justice.
When it came time to roll my cotton position last Friday, I reflected on whether or not I wanted to keep the position. That’s one nice thing about trading futures – when it’s time to roll, you have a check point of sorts that forces you to reflect, even if for only a second.
My plan with cotton has been to hold as long as it stays above it’s lower resistance points (which is has…but just barely), and sell if I was fortunate enough to see it hit its upper resistance.
Well, I got lucky and cotton broke $0.62 – and with some serious resistance here, I was happy to sell my position. 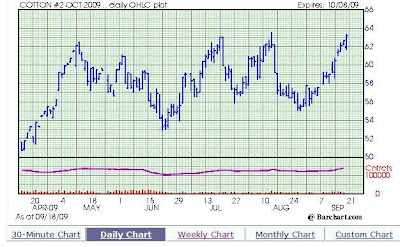 Cotton has been doing the range trading thing.
(Source: Barchart.com)
Why not wait for a potential breakout? After all, cotton has traded north of 90 cents in the past two years – perhaps a decisive break above 63 could send it on a moonshot?
Perhaps. But like I mentioned before, I’m still gunshy. I fear that the deflation monster is still lurking in the shadows. Last time I stayed stubbornly long – big mistake. I hope that next time, I can at least make a new set of mistakes, rather than repeating the same old ones!
Remember what happened last time deflation took hold of the markets – it took hold of all of them. All assets traded together – correlation went to 1. So much for diversification…it doesn’t really help to have your eggs in a few different baskets when ALL of the baskets hit the ground, and ALL of the eggs crack in half!
I guess I can’t see why things would be different if we see another wave of deleveraging. The dollar would rally. Treasuries may as well. And everything else would get slammed.
At the very least, I think we’re due for a correction in most assets. Optimism is quite high on, well, just about everything. Gold is everyone’s darling, stocks are in the midst of a rally for the ages, and the Fed is being heralded as the saviors of the financial universe.
I’m just not completely sold on this story, at least just yet.
So, for the meantime, I’ll be mostly in cash. And that means even a commodity with favorable fundamentals – such as cotton – is something I’ll be casting a skeptical eye on at these prices.
Popular Posts for the Week Ahead
In case you missed them – here are the most popular posts from the past week:
Positions Update – Still Like the Buck
We bid cotton a farewell, at least for now. My favorite trade is still the US dollar – I think it’s due for a massive rally, at least in the short to medium term, if for no other reason than the fact that absolute everyone is bearish on the buck.
I outlined my hypothesis for going long the buck a few weeks ago, and I don’t think the story has changed. Sentiment still appears to be overwhelmingly negative, and I am still not (yet) a believer in the inflation story.
If the facts appear to change – or, more importantly, if the chart proves me wrong – I’ll definitely reevaluate this position. 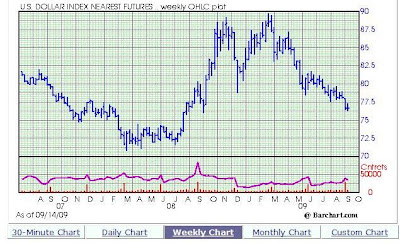 The dollar still sits well above its 2007 lows – at least for now.
(Source: Barchart.com)
Open positions: