Why We’re Shorting the Yen

Last Monday, we shorted the Japanese Yen.  Longtime readers may be wondering what we’re smoking, as we’ve been playing the long side of the Yen (with relative success) on and off over the past couple of years.

My thinking is that the carry trade has been completely unwound, and fundamentals will now start driving the currency markets once again.  It’s a tricky environment, as nation-states engage in an escalating battle of competitive currency devaluation.  I do believe that most of the world’s currencies are “circling the bowl”, just at different rates.
This should ultimately be quite positive for gold and silver, which may continue to regain their status as “sound money” while this plays out.
Back to the Yen – the fundamentals are not good, even worse than the dollar, I believe.  Japan’s economy, which is export driven, has seen exports absolutely collapse.  The Bank of Japan has not been shy recently about expressing an interest in halting the Yen’s rise.  A weak Yen is in Japan’s best short term economic interests.
With the Yen “breaking down” on the chart, it’s time to short it. 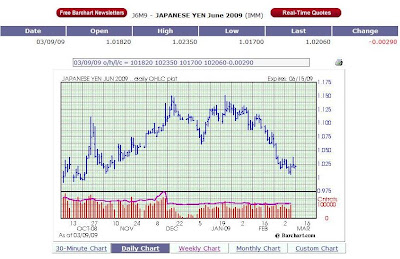 Source: Barchart.com
Other currencies with poor fundamentals that may be good short candidates are the British Pound and the Euro.
Recession and Muddle Through Recovery, or Greater Depression?

This is going to be a long, drawn out recession, and a slow slog of a recovery, I believe.  I see one of two scenarios unfolding, and have spent a lot of my recent time and energy figuring out of we’ll see:
Scenario #1, the Muddle Through Economy, is a phrase coined by financial analyst John Mauldin.  If you’re not familiar with Mauldin, I’d highly recommend you check him out.  He has a free weekly newsletter that is excellent.
Mauldin has a new service that I subscribe to, where he shares audio recordings of conversations he has with other financial gurus in his rolodex.  The most recent edition, recorded last week I believe, featured Nouriel Roubini, as they discussed the global economic outlook over the next 3-5 years.
While Mauldin and Roubini are both bearish in the short term, both seem to believe that things will eventually get back on track, led by the emerging markets.  Essentially we’ll have our deep recession, with a slow L-shaped recovery, but eventually we’ll get on with things.
On the other side of the coin, Doug Casey and the folks at Casey Research believe we are in for some very bad things.  Since they have been relatively on the money regarding the current mess we’re in, I can’t disregard their opinion that things are going to get flat out ugly.
For the full monty from Doug Casey, check out this guest article he penned for us at the end of 2008 about The Greater Depression.
My conclusion?  I’m cautiously optimistic that Mauldin’s view will prevail,  but can’t rule out the warnings being issued by the Casey folks.  So I try to be a good trader and keep an open mind to all possible scenarios – so that when the facts change, I can change my outlook accordingly.
As a side note, I’ve been ruthlessly unsubscribing from most other financial publications I have.  Just too much noise – I don’t need to have hundreds of stock ideas, and dozens of different opinions.  I’ve picked a few voices that I trust, and have gotten things mostly right to date in terms of the current economic situation, and will focus on them moving forward.
What I Do All Day
This blog is really just a fun side project for me.  I would love to spend all day on it if I could – and maybe someday I will if I can develop real business model around it – but for now, it’s a labor of love.
These days, my days are quite busy, as my software company just released it’s first product to the market.  We’ve built an automatic time tracking tool that helps people figure out where their time goes, by capturing and categorizing how they spend time on their computer.
It seems to be most useful for folks who need to meticulously account for their time, such as attorneys and other folks who bill hourly, by serving as a “personal timekeeper” of sorts.
I’d welcome your feedback and thoughts on Chrometa’s website and concept.  There’s also a free 30-day trial available on the site.  To chat more about this, you can ping me direct: brett – at – chrometa – dot – com.
Hanging Out on Twitter
I have to admit I’m getting more addicted to the strange universe that is Twitter by the day.  You can find me there @brettowens.
Current Futures Positions