With the DOW pushing to new 2009 highs yesterday, I was looking forward to today to see if the S&P could confirm the DOW’s push – which would indicate that this rally is still on.
Yesterday’s push was quite impressive across the board, but thus far today, we have not yet witnessed any decisive follow through. After 6 consecutive positive days, you’d expect the markets would need a breather at some point.
However, if the S&P turns down again before failing to break it’s October highs, that would be a bearish looking “double top”. 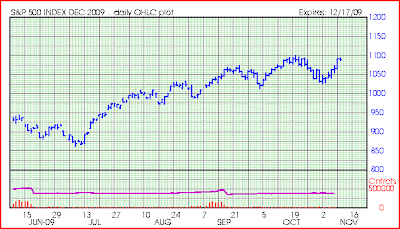 The S&P is bumping up against strong resistance (again) around 1100.
(Source: Barchart.com)