The rally in the Australian looks poised to continue, as their central bank left interest rates unchanged – which preserves the large yield premium the Aussie still enjoys over most other major currencies.
Here’s the breakdown from legendary currency analyst Chuck Butler:

Down Under… The Reserve Bank of Australia (RBA) left rates unchanged (good for them!) and there was some good news for the economy too, so… The A$ has been underpinned, and poised for a renewed attack on the green/peachback! (for new readers, when I say green/peachback I’m talking about the U.S. dollar, who has changed its color to peach and you can’t just refer to it as the greenback any longer… At least I can’t! HA!)

Australia’s Current Account Deficit narrowed in April to A$4.6 Billion, or 5% of GDP… Still too high for my liking, but, with China pushing the envelope on commodities, investors can look beyond just the deficit in Australia, as long as it keeps narrowing, which it has overall in the past year!

The RBA’s statement following the meeting was a bit cautious, and leads me to believe they’re leaving the door open to a rate cut in the future… I guess they wouldn’t be prudent if they just closed the door! So… When this was first announced the A$ took a hit… But has recovered from that initial hit, and like I said above, poised for a renewed attack on the green/peachback…

Yesterday, before this news came out, I decided – what the hell – pyramid time. So I picked up another contract in the morning at around $0.808.
Most of the day this baby was in positive territory…then in the evening, I performed a cardinal sin…I checked the overnight session!
NOTHING good ever comes of me checking the overnight sessions. I get worked up, lose sleep, and ultimately make dumb trades – a hat trick of grief and stupidity.
Last night was no different…when I checked, I was slightly underwater on the position, panicked, and sold it off. In trader’s parlance, I “sold to the sleeping point.”
Then came the news, and where’s the A$ sit now? Over $0.82! Moral of the story? Be careful trading those overnight sessions…the moves never seem to stick!
But don’t worry – I wasn’t going to leave it at that. No way, not when I can inflict more pain upon myself. I just reinitiated the position from the supermarket cafe I’m typing this from. What a boon wireless internet is – to make dumb currency trades 5-10 years ago, you’d have to dial the phone and talk to a real human being!
Now I’m off to the antacid aisle…
If you’re toying with a move into the A$, here’s some recent coverage you’ll want to review: 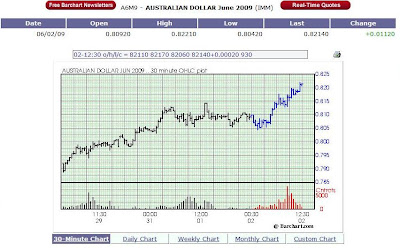