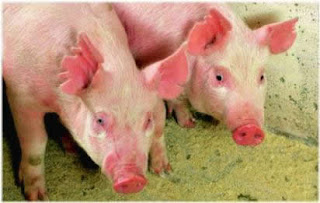 Bloomberg reports that “In the worst year for commodities in at least five decades, hogs rose 6.6 percent, the second-biggest gains on the Reuters/Jefferies CRB Commodity Index, behind cocoa.”

The article quotes fund manager Mark Greenwood: “We’re going to have 3 to 4 percent less pigs next year, and that should be very supportive to higher pork prices.”

“In the middle and latter stages of recession, energy and base-metals markets tend to underperform,” Barclays Capital said in its 2009 commodity outlook report to clients on Dec. 18. “Gold, agriculture and livestock tend to outperform other commodities, and it is these sectors that could prove most robust in early 2009.”

The 2008 commodity rally petered out before rising meat prices had a chance to join the party, as we had hypothesized back in May. Our theory was that higher feed inputs (corn, soybeans) would eventually pass through and result in higher meat prices. Interestingly, the Bloomberg article mentions one producer who unfortunately is locked into $6 corn until the end of 2009.