It might be time for us to grab a pint…and short one of our favorite whipping boys once again.
The British Pound – the only currency that may actually be sicker than the US dollar (two turds circling the bowl really) – looks like it’s recent rally may be running out of steam. 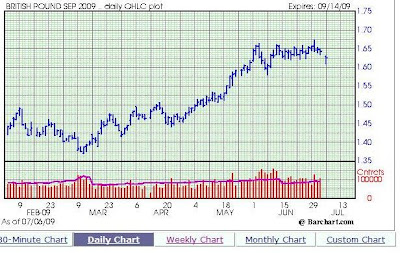 Grab a pint…and short the Pound?
(Source: Barchart.com)
The BP has plummeted since early 2008 – from around $2, all the way down around $1.37 at it’s low earlier this year – and is now back up around $1.62. That looks like a standard fare retracement to me of roughly 40%.
With the dollar starting to look frisky once again, we could see the BP get smacked down once again soon.
If you’d like to short the BP, the ETF FXB is probably the easiest way to do it.
The trouble with shorting the Pound straight up is that you’re short in dollar terms – so if you prefer to hedge with another currency, you may want to pair it up with a long position, such as say FXA (the nice, sound Australian dollar).
Further reading: Australia caught sandbagging the A$!