Last Sunday I wrote that I thought it was time to go long the US dollar. Investor sentiment is near record low levels, which usually means the price has nowhere to go but up, at least in the short term.
When making a contrarian pick like this, you usually prefer to see articles that take the opposite view, rather than the same one – otherwise you start questioning your original hypothesis!
But when I saw that expert trader Jeff Clark agrees that the buck is a buy, I was pleased…in fact, I would have had to reexamine my position had he taken the opposite side! Jeff writes:

But as we’ve seen so many times before, when everybody lines up on one side of a trade, the odds favor it going the other way. Consider what happened in July 2008. The dollar index was pounding out new lows, and the Daily Sentiment Index dropped to just 5% bulls. It seemed everyone was bearish on the buck, and they were betting heavily on its demise. Four months later, the dollar index had rallied over 20%.

We’re seeing something similar today. Everyone is convinced the dollar is a doomed currency. And they’re probably right over the long term. There are a lot of stops on the way to the graveyard, however. And like the monster, Jason, in all those Friday the 13th movies… just when you think he’s dead for good, there’s another sequel in the making.

You can read the rest of Jeff’s analysis here – and if you’re interested in checking out his premium trading services (they are expensive but excellent), you can learn more here.
How can you trade this? UUP is the ETF you’re looking for. Or, you can of course use futures or options as well. 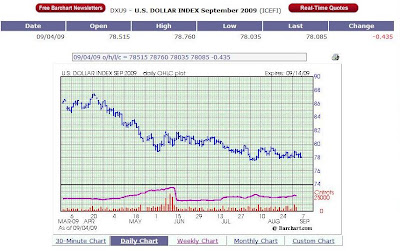 The dollar may be finding a bottom.
(Source: Barchart.com)