Here’s a guest piece by Bud Conrad and David Galland from the Casey team, with an opportunity to check out their free report on the current state of the economy. As always, these two do a bang up job of looking under the hood of rosy government figures and media reports to get the real story.
I love their analysis and completely agree that the economy is a trainwreck, with the ugliest carnage around the corner. I’m not sure if I still agree with their inflation hypothesis…though with gold pushing $1,000, the market may prove them right and me wrong, perhaps sooner rather than later!
Enjoy this piece and free special report. And have a great Labor Day too – if you’re short on investment reads, you can check in here – I’m not going anywhere, and my wife is out of town…so when I’m not drinking beer, I’ll probably be catching up on reading and cranking out a blog post or two.
***
Green Shoots or Greater Depression?

While we aren’t contrarian for the sake of being contrary, more often than not that is the position in which we find ourselves. Today, with the media falling all over itself to paint a rosy outlook for the economy while simultaneously voicing encouragement to the new administration in its remake of the nation in previously unimaginable ways, it’s hard not to question our conviction that the worst is yet to come.

Could the economy really recover this quickly from the traumatic trifecta of a record real estate bubble, leviathan levels of debt, and a global credit collapse? We don’t see it as remotely possible, but yet… but yet… there for everyone to see are countless happy headlines and breathless exhortations that the worst is behind us.

So, is it Green Shoots or Greater Depression?

Getting the answer right is critical, because from it flow serious consequences to each of us. And not just in our investment portfolios but in how we organize our lives.

Looking for an evidence trail leading to the correct conclusion, Casey Chief Economist Bud Conrad once again put in very long hours digging through the data. Here’s what he uncovered, about the claims of green shoots, and what may actually be in store for the economy moving forward.

Rather than accepting the many commentaries that our economy may be improving, let’s focus for a minute on the important forces that will play out over the decade ahead, and the minor improvements – from disastrous levels – that have given commentators such hope that the worst of our problems are behind us.

While some individual measures of economic activity appear slightly less dire than previously, it’s important to understand that most improvements are largely attributable to government intervention.

For example, at the onset of this crisis, commercial paper spreads rose to the point that this important source of corporate short-term funding had virtually shut down. Today, those spreads have returned to almost normal levels. But the bulk of this improvement is not due to a return of confidence in the economic system but rather to the Federal Reserve directly intervening in the market with several hundred billions of dollars.

And mortgage interest rates, which briefly dropped into the 4% range, did so not because of a surge in creditworthy borrowers or eager lenders… but rather because the Federal Reserve launched a program of buying $1.25 trillion of mortgage-backed securities. Doing its part, the Treasury has poured billions into Fannie and Freddie and provides guarantees for their mortgages.

In these and many other instances, the “green shoots” that optimists have spotted are really just the visible manifestations of the massive interventions by an increasingly bankrupt government.

Indeed, the massive fiscal stimulus provided by the federal government – and by the Fed, which has slashed interest rates to near zero, purchased mountains of toxic waste, and bought up Treasury debt with billions in freshly printed money – are unprecedented in the history of the U.S.

But even a cursory review of key metrics reveals continuing declines in housing prices, rising unemployment, and slowing consumption as measured by falling retail sales, GDP, and the collapse of world trade. Sure, housing unit sales recovered a little recently, but that’s due mostly to the distress sales of foreclosed homes and houses worth far less than the outstanding mortgage. These are not signs of a strong economy.

The only rational conclusion to be drawn is that the crisis is far from over and that we are not likely to see a strong recovery anytime soon. In fact, things are likely to get much worse before they get better.

The massive debt expansion that played a crucial role in creating the disastrously overleveraged economy is not shrinking. As you can see in the chart here, it’s growing ever bigger. 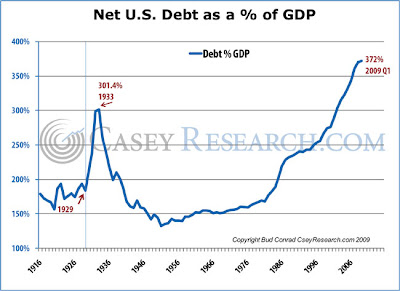 That debt growth was fostered by U.S. government debt growth, which is now getting out of control.
[Don’t just believe what you hear about “green shoots,” or you could lose some serious money. To find out what’s really going on and where all this is leading, read the rest of Bud’s in-depth article here.]