Last week, with oil pushing $60/barrel, CNBC asked the question: Is oil going to $300?
On cue, crude fell this week, to close at $56.  CNBC can have an uncanny ability to signal short term tops.
Where is crude heading from here?  Some folks believe the bullish supply/demand fundamentals that drove crude north of $140 still in place, while other experts say there is plenty of crude on the market right now, and no reason for crude to be north of $40 right now.
In this guest article, Casey Research’s Marin Katusa takes a stroll down memory lane to review where crude has been, and analyze where it may be going from here.
I think very highly of Marin’s work, and am a subscriber myself to his Casey Energy Opportunities publication…if you like his analysis, there’s a special link at the end of the article where you can grab a free trial.
***

The Price of Oil
How did it get here, and where is it going?

What a difference a year makes.

While March lions and April showers were at work in 2008, so were these factors in the U.S. and global economies:

What happened? And even more important for us as investors, what’s going to happen?

The Casey Energy Opportunities team pulled together the pieces of the oil sector picture that other sources tend to scatter or ignore. We’ll give you a broader understanding of the drivers within the oil industry, the markets in which they operate, and how you can use that knowledge to push your profits upward.

The Oil Industry Now: A Rock, a Hard Place, and a Supply Glut That Isn’t

Everyone who drives a car or heats a home with petroleum has welcomed the fall in oil prices from their high in the summer of 2008.

While it’s hard to argue that filling your tank at $2 per gallon is a lot easier on the wallet than $4 or $5 per gallon, the broader economic effects of such low oil prices are troubling.

Leading the concerns is the drop in oil exploration and drilling that accompany a drop in price. Below the $50/barrel mark – and for many companies the bar is closer to $65 even for conventional fields – oil producers typically spend more money getting oil out of the ground than they can recoup by selling it. At the same time, turbulent financial markets have tightened credit. These two factors have pressured producers to allocate exploration budgets away from drilling projects and toward meeting debt obligations and day-to-day operating costs instead.

The plunge in prices has consumed the cash buffers of even the major oil companies. ConocoPhillips, for example, announced in January that along with eliminating 1,300 jobs and writing down $34 billion in assets, it was also planning to cut its 2009 investment budget by 18%. Exploration projects are part of both writedowns and spending cuts. The results of curtailed exploration are two-fold. First, some oil companies will be simply unable to survive the economic crisis. Second, supply in the longer term is being sacrificed to stay afloat now.

Storage facilities are bulging. The chart below shows the contents of the Cushing, OK, storage facility — where NYMEX deliveries take place — have recently doubled from their average 2008 volume. Along with a host of other facilities around the world, it got this way because of an unusually dramatic contango at the beginning of 2009. (A contango is a kind of market inversion, when the current [spot] price dips lower than the future price.) 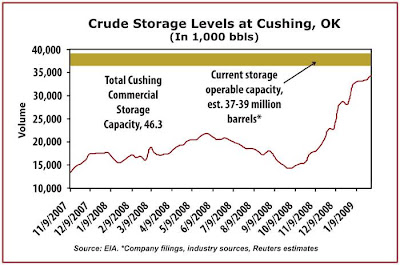 In January, the spot price of oil plummeted as low as $37/barrel, while futures for July delivery were trading for $52. That meant if an oil company could buy and store product for seven months, it could lay out $37/barrel and be guaranteed a profit of $15 – or 40%, minus costs – in July. And indeed the buying frenzy took off, reinforcing the decision to turn off the drills.

So for the moment, we are artificially flush with oil, and demand has dropped as the global economy will likely shrink for the first time since World War II. It’s no surprise that oil prices have been staying down.

Many analysts say we won’t feel the effects of declining exploration for a few years. But the numbers are emerging already. According to the U.S. Energy Information Administration (EIA), non-OPEC countries demonstrated an average annual growth in supply of 570,000 barrels/day from 2000 through 2007. In contrast, they recorded a drop last year of some 300,000 barrels/day.

At the same time, OPEC appears to be conforming to its production cuts of 4.2 million barrels/day, begun in September 2008. The oil cartel is known to announce cuts that its members don’t actually follow; it’s in their economic best interest, if only in the short term, to sell all they can. But this time, oil has plunged far below levels to sustain their economies. Even Saudi Arabia expects to run a budget deficit this year.

OPEC, which produces about 40% of the world’s oil, would like to see prices around $75/barrel, at least. But the fragile global economy would have a difficult time absorbing such a price at the moment, and the cartel decided against further production cuts when it met in March. In fact, some three weeks later, Saudi Arabia actually announced a price cut on all its grades of crude to European, North American, and Mediterranean markets – a dramatic attempt to spur demand amidst high inventories.

So, entwined as it is with the economy, the oil industry is currently in a conundrum. The fix it requires – higher prices for its product – will choke the framework in which it operates.

At the same time, we’ve got supply problems ahead.

How Did We Get Here Anyway?

Like many aspects of the markets, movements in price are driven partly by real factors and partly by perception. Rags-to-riches-to-rags-to-riches Texas oilwoman Sue Sanders summed it up when she noted wryly in her 1940 autobiography that “nothing succeeds like reports of success.”

Last year’s run-up of oil was no exception: part real, part report. Some of the real factors:

On the perception side of price drivers, it’s hard to overlook the fact that the market push stayed strong in the face of increasingly gloomy economic data. Casey Research was earlier than most in predicting the economic crash (we published reports such as “The Coming Currency Crisis” in June 2006), but by spring 2008, even officialdom was dancing around the word recession.

Normally, news of burgeoning foreclosures, plummeting home sales, spiking personal and business bankruptcies, rising unemployment, and other economic indicators would tend to exert a bearish influence. After all, consumers generate 70% of U.S. economic activity, and if they stop or cut back on driving to work or the shopping mall, telephone relatives or business partners instead of flying out to see them, reduce purchases of items containing plastics, turn down the thermostat, and other weather-the-storm measures, oil consumption should decline.

It took months for all these drivers to realign – but as we all know, they did, and then some. The chicken-and-egg debate, whether oil’s sky shot triggered or portended the economic debacle in the closing months of 2008, will require more distance and data to resolve. But it’s true that the dollar had started its comeback by mid-summer, supply had caught up, geopolitics had settled a bit, China backed off on its buying, no major hurricanes hit – but economic realities did.

Meanwhile, Congress jumped up and down and cried “Speculators!” “OPEC!” “Oil producers!” in tidy sound bites.

The Next Big Plays: Where You Need to Be

Oil companies are influenced by the range of market drivers and economic conditions according to size. The junior oil producers, those with market capitalizations of $250 million or less, have the small-business advantage of flexibility when times are good. These times aren’t good, of course, and even well-managed juniors with good projects are in trouble. Their vulnerability is in the credit market. You’ve likely heard of credit lines being revoked and refinancings denied to people with impeccable credit. Now imagine pitching a drill project without a wallet full of assets ready to lay on the table.

Mid-tier producers, with market caps between $250 million to $2 billion, will look to mergers and acquisitions to survive. The majors ($2-20 billion market cap) and Big Oil (over $20 billion) will also be shopping. With low oil prices shutting down exploration, development, and even production, these companies will be looking to replace their reserves instead by purchasing smaller, solid companies with proven production. It’s simply cheaper.

We see two ways to profit from this trend.

First, we buy shares in undervalued, producing companies that are profitable even below $40/barrel, are best of peer, and own large reserves. These are the companies that Big Oil will be looking to acquire. One such company, an oil sands producer, is currently a part of the Casey Energy Opportunities portfolio.

Second, we believe that owning a potential consolidator is the best position. As debt load and low commodity prices overtake them, junior producers will be forced to consolidate their projects. We currently own one such candidate, and are scouting for others with such muscle. Consolidators will be purchasing projects from the bank at 25 to 30 cents on the dollar.

Our tactics have already paid off handsomely in the last six months: all our recent recommendations have been on fire. A few tripled their value, and one generated a return of 540%.

As we’ve seen, supply problems are looming, no matter what timetable of Peak Oil you may believe in. With increased demand inevitably come higher prices. Our approach at Casey Energy Opportunities positions us to take advantage of the trend in both the short and longer term. And we guide our subscribers not only when to buy or sell, but also when to take profits and a “Casey Free Ride” to eliminate risk.

We’d like to offer you the opportunity to kick the tires of Casey Energy Opportunities RISK-FREE for 90 days, with 100% money-back guarantee. Click here to give it a try.