Inflation Investing – A Historical Perspective on What To Do

On Friday I was having a discussion with my friend about inflation, speculating about what may happen to stock prices if inflation were to take hold. Both of us are big fans of Marc Faber, so we were discussing the scenario that Faber has been predicting – that if cash is about to become trash thanks to government money printing, you want to get into tangible assets, including stocks, to protect yourself.
But what really happens to stock prices during inflationary times? You could slice and dice the discussion many different ways from an academic perspective…but the more I thought about it, the more interested I became in digging out historical examples.
Then I remembered that Faber himself had a great chapter in his book Tomorrow’s Gold that is entitled The Economics of Inflation.
So, I reread the chapter today.
The Paradox of Inflation
Faber discovered that stock markets of countries that are experiencing very high rates of inflation can become very undervalued in real terms, creating tremendous buying opportunities for the astute and courageous investor.
The reason, Faber says, is that currency depreciation, due to “massive capital flight”, overcompensates for domestic inflation, creating stock market values that are truly outstanding. When inflation subsides from extreme levels, equities can realize substantial gains in real terms.
Everyone knows the common playbook for investing through inflation is to buy metals and short bonds. But according to the data Faber presents, it can also be a great time to buy stocks for cheap.
And the higher the rate of inflation, or the worse the hyperinflationary scenario, the greater the buying opportunity generally is. Faber takes a look at examples from Argentina 1977-1987, Germany from 1919-1923, Latin America in the 1980s, and Russia after the fall of communism. And all four examples revealed tremendous buying opportunities for stocks – especially if you bought during the height of the inflation.
Interestingly Faber also cites the opposite case – that countries with low rates of inflation tend to have richly valued equity markets. Such as Japan in the late 1980s, or the Western world in the late 1990s. Goldilocks is not so kind to buy and hold investors.
Overall these findings seem to jive with the old investing adage that you should buy when there’s “blood in the streets” – and conversely be cautious when the sun is shining.
I’d like to add that Germany’s hyperinflation is often blamed for the rise of Hitler and, ultimately, World War II. However Faber says that hyperinflation in Germany actually ended in 1923, with the institution of a new currency. Thereafter, Germany boomed for the rest of the decade, and was quite prosperous up until the depression.
I think history shows that governments can put the breaks on inflation real quick, if they have the stomach and motivation to do so. Germany did it in 1923. Paul Volcker slayed the inflation dragon in the early 1980’s.
So it appears that purchasing stocks today in anticipation of inflation or hyperinflation may not yet be the right move. While stock prices would increase in nominal terms, they may become undervalued in real terms – at which point you’d want to be a buyer.
Intel – More Big Results, But Stock Sells Off After
On Tuesday, Intel announced good earnings and an upbeat outlook for the second straight quarter. Initially, the stock popped – only to trade lower for the remainder of the week. INTC currently sits below where it was at when it announced earnings. 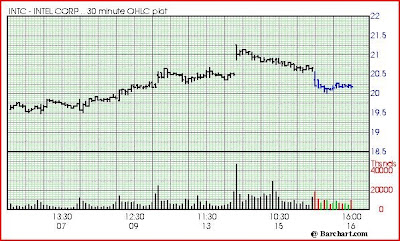 INTC popped higher after its earnings report, but the rally stalled.
(Source: Barchart.com)
Perhaps all of this good news was already priced into Intel’s stock price? If that’s the case, I’d imagine there are many stocks that you could say the same thing about.
Some More Good Reading
Positions Update – Still Long the Buck
Well I was either early or wrong on the dollar call, and as far as trading goes, that’s basically the same thing!
This is why calling a bottom before it’s actually put in is indeed a fool’s game. And I fell into the trap yet again.
Although I still like this trade, I should have waited for an uptrend. As is, I’ll continue to hold the position, and wait for the break up that we’re anticipating. 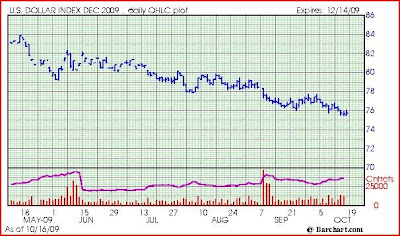 Oops – you want to be short charts like these!
(Source: Barchart.com)
Open positions: