On Tuesday evening, we had our monthly meeting of local Casey Research subscribers. Really sharp investment minds in the group – it’s a real pleasure and treat to chat about a wide variety of finance and investing related issues.
The general consensus of the group (fairly contrarian in nature) is that gold and cash are the places to be right now. Gold because it’s a store of value, not because it’s going to $1,500 tomorrow. In fact, there was some trepidation that gold is due for a pullback from here. But everyone agrees that holding physical bullion is a good thing.
Short term market outlook is very cautious on the whole, to say the least. We are all expecting a pullback of sorts, and believe that if/when that happens, we could again see asset deflation across the board. So while most of us are long term believers in gold and energy plays, caution is being exercised right now.
Consumer Credit Plummets in July
I noticed a big time deflation headline on the USA Today earlier this week: Consumers Cut Outstanding Credit By Record $21.5 Billion.
As much as the Fed may be running the printing presses, it doesn’t matter if the American consumer is choking on debt. Remember that shrinking credit is really the cornerstone of the deflationary hypothesis.
Because we have a credit based monetary system, credit can shrink faster than the Fed can print. At least in the short term – say the next 2-3 years. Of course, we could see inflation, or hyperinflation after that – but possibly after a huge wipe out in asset prices.
If the Fed can reinflate the credit bubble one more time, soon, then yes, all bets are off. But there doesn’t seem to be any indications of this actually working – yet. Though perhaps $1,000 is an early warning signal. We shall see!
Wages Continue to Drop
Nice article by Rob Parenteau in Wednesday’s Daily Reckoning about labor costs entitled Unlabor Day. I like his stuff – it’s quite thorough and balanced.
According to Rob, the recession is doing it’s job, and America’s businesses are becoming more productive. I believe that 100%, and it’s something I wrestle with when thinking about where our economy is heading. A lot of excesses are in fact being wiped out – which is exactly what should happen. Unfortunately, the government may be creating enough distortions to nullify all the positive that’s happening.
Anyway back to his article – labor costs are typically an important component of inflation (or the lack thereof). It’s hard to see rising prices without rising wages. Thus for now, Rob believes inflation is on hold until we see the government’s inflationary actions start to take hold:
The question remains what lies ahead after the massive quantitative easing operations of the Federal Reserve have lapsed and the bulk of the fiscal stimulus is behind us. In the very near term, we can surely expect auto sales to wilt following the end of the cash for clunkers program, but we remain impressed by what supply managers in the most cyclical part of the economy, namely manufacturing, have to say about new orders, production and export conditions. Policymakers panicked and adopted a “whatever it takes” stance, one that has proven to be the most radical outside of major wartime conditions. Looks like something took – and not surprisingly, gold is taking out the $1,000 per ounce mark at the same time. 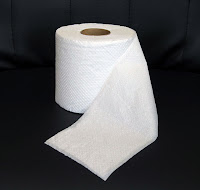 It’s Even DE-flation in Toilet Paper
Procter & Gamble announced last week that it will be cutting prices across nearly 10% of its household brands. It looks like we’re at least seeing deflation in laundry detergent!
That reminds me of an interesting point Bob Prechter made in the interview we linked to last week (inflation/deflation debate with Prechter and Jim Puplava – highly recommended).
When Puplava said that he didn’t see prices coming down in his neighborhood, Prechter countered and said that we’re seeing rising prices in a lot of sectors that have high government involvement. Like medical care – highly regulated industries. And these price increases are due to the inherent inefficiencies of government meddling, and nothing more.
In mostly privatized industries, he says we’re seeing more deflation across the board. An interesting though to ponder.
If It’s a New Bull Market, Who Forgot to Tell China?
It seems ominous that China, the posterchild of this rally and lone economic hope for the world, has turned south. Remember that China turned south ahead of the US markets tanking last time. Maybe they get the news faster in the Far East thanks to the time difference?
Sure China could break out from here. But I can’t help but think that the five-year chart shows a classic Fibonacci retracement since March, and nothing more.

Positions Update
Rolled over my dollar index position to the December contract. I love getting the Friday morning call from my broker that I need to be out of a position, haha. Haven’t had that one in awhile. My wife always jokes that if I got hit by a truck, my lasting curse to her would be a delivery of cotton and soybeans to our front lawn!
Still holding these (dogs) of positions for now. I’ll repeat what I said about China for cotton – if it’s a new bull market, why doesn’t cotton know? 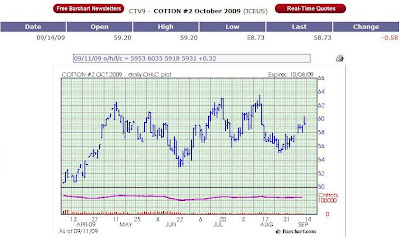