So Gold CAN Still Go Down, After All
Last week was shaping up to be another banner one for gold, as the old relic kept on climbing, day after day…that is, until it stopped.
Gold’s one-way rise experienced a sharp setback on Friday, dropping nearly $50 on the day, and over $60 in intraday measures. 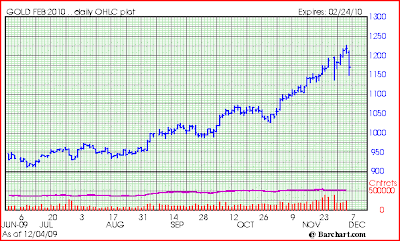 Friday was the biggest down day for gold in some time.
(Source: Barchart.com)
Perhaps related, perhaps not, The Financial Times reported on Wednesday that China is wary of the danger of a gold “bubble” (hat tip to my good friend and regular reader Super Joe for sending this link along).
Hu Xiaolian, the vice-governor of the central bank, said Beijing would not buy gold indiscriminately.
“We must keep in mind the long-term effects when considering what to use as our reserves,” she said. “We must watch out for bubbles forming on certain assets and be careful in those areas.”
China announced this year that it had quietly doubled its gold reserves to 1,054 tonnes, the world’s fifth largest holding. India has also joined the rush, gobbling up half the IMF’s gold sale.
China’s ever-increasing interest has spawned the popular gold bull theory that the Chinese have established a “$1,000 floor” price for the metal. In other words, with the Chinese buying up more gold on the dips, one needn’t worry about the possibility of gold ever dipping down to triple-digit territory ever again.
The only problem with theories like this is that, however sound they may appear, they are usually wrong. The market takes great delight in squashing “absolute” myths and theories, and I suspect this one will be no different.
But – you may interject – with the government printing money like it’s going out of style, won’t that result in rising price inflation, and rising gold prices? It sure may – I just suspect that it will take longer than most investors anticipate, thanks to the massive amounts of credit that will be written off in the coming years, resulting in some wicked near-term debt deflation.
Trading Against Our Hero, Jim Rogers
Anytime you find yourself on the other side of the trade from Jim Rogers, you probably want to seriously reconsider your position.
That’s where we find ourselves now, though, with Rogers continuing to reiterate his distaste for the dollar. To be honest, I don’t like the dollar fundamentally either, but believe that paradoxically, it’s due to rise in the near term because of its inherent flaws.
In other words, I agree with everything Rogers says, except for his timing. We’ll see who’s right – I wouldn’t blame you one bit for siding with Rogers – but I’m sticking to my guns on this one…at least for now.
And…Richard Russell, While We’re At It
The Great Richard Russell believes that gold is going to move higher, no matter what happens, according to The Daily Crux.
Question — What would it mean if Industrials and Transports broke out to joint new highs?

Answer — I think it would mean that the Bernanke Fed was beginning to win the war against deflation, and assets were once more beginning to inflate. In that case, gold should move higher.

Question — What would it mean if this advance topped out, and the bear market was taking over again?

Answer — I think it would mean that the Fed had lost its battle against inflation. If that was the case, I believe the Fed would spend even more, there would be even more stimulus programs and interest rates would remain at zero “for the duration.” In that case, gold should move higher.

(Source: The Daily Crux)
Well I hate to trade against Russell too – a true legend. But, the dollar bull/gold bear camp is so deserted, that I guess it just comes with the territory that our favorite investors will be on the other side of the trade…because there are so few on our side!
Why Worst Case Scenarios are Already “Priced Into” These Markets
Tom Dyson, one of my favorite investment writers/analysts, is also one of the very few lone soles left in the debt deflation / dollar bull camp (last one out, please turn out the lights!)

Last week, Tom penned an article that I thought articulated the case for a near term dollar rally brilliantly – and our good friends at Stansberry & Associates were kind enough to allow us to reprint the piece in it’s entirety here.

Positions Update – Still Really Short the S&P, Long the Dollar
Nothing’s changed here – still waiting for the dollar to bottom, and the S&P to top. It’s been a maddening wait.
We think the dollar is the lynchpin to the whole equation, and that a dollar bottoming should roughly coincide with a top in the other markets. Friday was an encouraging sign, as the dollar rallied sharply. Has it finally put in a low? We shall see! 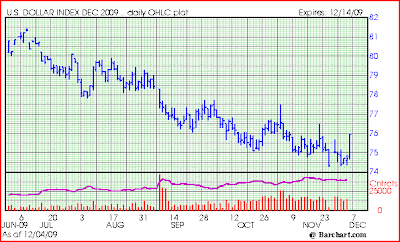 The dollar rallied sharply on Friday to end the week – did this mark the start of a mega-rally?
(Source: Barchart.com) 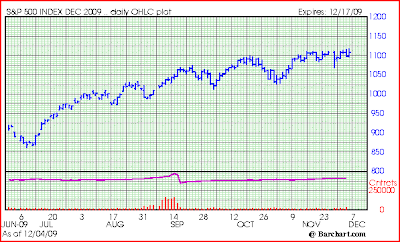 Though this rally appears to be running on fumes, it’s still running…at least for now.
(Source: Barchart.com)
Open positions: