The biggest investing mistake I ever made was not getting out of commodities during the Great Deleveraging of ’08/’09.
I had a pretty good beat on the major trends – stocks were highly vulnerable, the US could be in for some very bad things, etc – but I failed to project the effect that a complete financial collapse would have on commodities.  I followed my stops but kept trying to re-enter the market too early.  Being on the wrong side of a trade, well, sucks.
In 2004, I read Hot Commodities by Jim Rogers, and my investing outlook and thesis completely changed.  I realized that commodities, not stocks, were the place to be for the next 15-20 years.  That spawned my foray into trading, and eventually this blog as well.
The fundamental factors of the commodity bull market are still intact, I believe.  No market goes straight up…commodity markets are certainly no exception…and now we’ve got a very attractive entry point for many commodities.  Prices have come down considerably, and as a result of this financial mess, supply has come offline a great deal, laying the ground work for a doozy of a boom, if/when the global economy picks up again.
Now here’s the risk I see – during the Great Deleveraging, correlation of all assets basically went to one (exceptions were the US dollar and Treasuries).  So any well laid out diversification plans were all in vain.  In fact, I think we’re starting to see that diversification is a load of crap, a product of the 1980’s/1990’s bull market in equities.  Probably something we could discuss at length in a separate piece.
Van Tharp, an excellent trading coach and author, is fond of saying that you do not trade markets – you trade your beliefs in the markets.  Every decision you make is filtered through your belief system.
So while I believe in the commodity bull market in the medium to long term – I also believe this is a bear market rally we’re currently experiencing.  I believe stocks are still overvalued, and that we haven’tyet  seen the final lows on the S&P and the DOW.  I believe the DOW/Gold ratio will eventually settle close to 1, before a new bull market in stocks begins.
Now these are my beliefs.  You have your own beliefs about the market, and if they’re not aligned with mine, then my trades and thinking won’t make any sense to you.  (Actually if I am making sense to you, that’s when we should all be worried!)
OK so here’s my dilemma – stocks are going lower I think – maybe sooner, maybe later.  The last time stocks went lower, commodities got slammed.  Therefore I have reason to be nervous that the next leg down in stocks could wallop commodities as well in the process.
To test this hypothesis, I’d like to pull up some charts, and see how some of our favorite investment ideas have been performing relative to the S&P 500 – and figure out which ones, if any, have managed to decouple from stocks.  (All charts courtesy of Barchart.com) 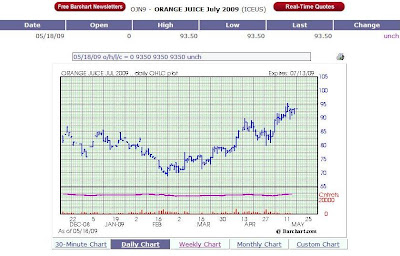 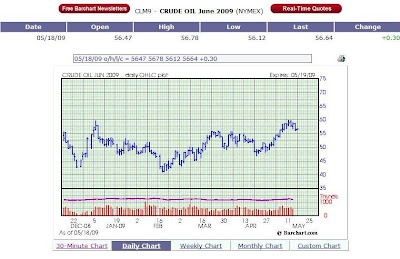 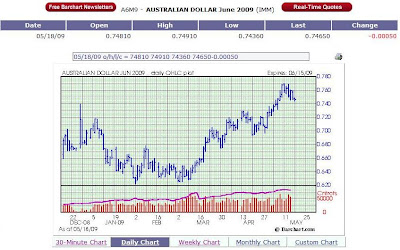 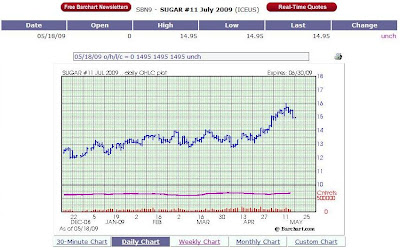 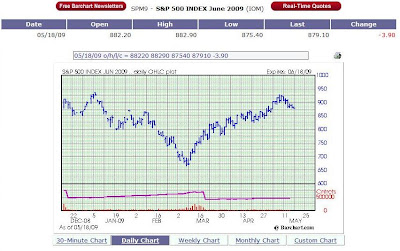 Observations:
CONCLUSION: I think it’s safe to get back in the water on some select commodities – but be careful!  I still believe agriculture is our best bet, and right now I like OJ’s chances the best…especially given it’s performance on crappy days for the S&P.
In Case You Missed It…This Week’s 5 Most Popular Posts…
Positions Update – Feels Like Old Times!
I got out of both sugar contracts on Friday…booking a nice profit on one, and a very slight loss on the second.
My pyramid was beginning to invert – not a desirable thing – so I pared back the second sugar contract after it went negative.  Then after thinking about it, I pulled up the long term sugar chart and thought that the market, while definitely trending up, may have gotten a bit ahead of itself.
So, we’ll book some profits there, and look for an attractive entry point.
I have to admit – I much prefer having a long sugar position than not.  Having no sugar position is like my wife being out of town – a little bit of an empty feeling, like I’m incomplete.  Sugar, you complete me – let’s get this price pull back out of the way quickly, so we can reunite.
By the way, I think I pretty much guaranteed myself a crappy week after my self congratulatory post last Sunday.  I was starting to feel pretty smart…which is always dangerous…in fact, here were my exact words:

What a week! And the recent weekly winning streak rolls on…in a big way…

Now that I’ve got my confidence back a little bit, I’m probably quite dangerous to myself at the moment!

Anytime you read crap like that from me in the future, you may want to just short everything I own – a guaranteed winning trade.