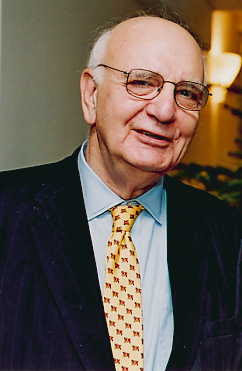 Agora Financial just published an interview with former Fed Chairman, “Tall” Paul Volcker which they conducted in sync with the release of their new documentary I.O.U.S.A.

When I became chairman of the Federal Reserve, I think there was a general feeling in this country that economic affairs, and inflation in particular, had reached a kind of crisis point. Things were not going very well. There was a feeling of uncertainty.

There was a lot of speculation in commodities and the gold price, which was then free to fluctuate up to $ 800 an ounce. In an odd kind of way, that’s a good time to step into a job because people thought that something needed to be done. I also think the mood of the country was willing to accept action, which 10 years earlier they wouldn’t have been willing to accept. And once we got caught up and I got caught up – or the Federal Reserve Board got caught up, for that matter the country got caught up – in an anti-inflationary effort, there was a certain willingness to take very high interest rates and eventually a rather severe recession, with the hope and expectations – certainly, the expectation that I had – that things would get better. And if we could restore any sense of stability in the currency, the country would be better off as long as we sustained that phase.