The following article was adapted from the November 2009 Elliott Wave Financial Forecast and reprinted with permission here.
Steve Hochberg and Pete Kendall produce stellar analysis for Elliott Wave International – two of my favorite guys in the biz – here, they take a look at trading volume, and what it says about investor confidence. Read on, and enjoy!
***

By Steve Hochberg and Pete Kendall

When Wall Street’s total value of assets rose to a “mind-boggling 36.6 percent of GDP” in late 2006, The Elliott Wave Financial Forecast published a chart of U.S. financial assets literally rising off the page.

The Financial Forecast observed that financial engineers had “found a new object of investor affections—themselves” and asserted that “the financial industry’s position so close to the center of the mania can mean only one thing; it is only a matter of time” before a massive reversal grabbed hold. Financial indexes hit their all-time peak within a matter of weeks, in February. The major stock indexes joined the topping process in October 2007 and in December 2007 the economy followed. Subscribers will recall that one of the most important clues to the unfolding disaster was the level of financial exuberance relative to the fundamental economic performance.

This chart of the value of U.S. trading volume (courtesy of Alan Newman at www.cross-currents.net) reveals that the imbalance is far from corrected. 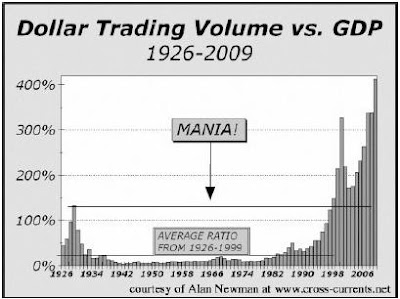 The chart of dollar trading relative to GDP shows how much more willing investors are to trade shares in companies that operate in an economic environment that is anemic compared to that of the mid-1960s. A basic implication of the Wave Principle is that the public will always show up at the end of a rally, just in time to get clobbered. This chart shows that it is happening in a big, big way now because the market is at the precipice of the biggest decline in a long, long time.

Total dollar volume continues to rise despite further fundamental financial deterioration. Yes, GDP experienced a one-quarter, clunker-aided uptick of 3.5 percent in the third quarter. But the economy is in far worse shape than it was when we made the above statement. In fact, its recent performance on top of the decades-long economic underperformance (which is discussed extensively in Chapter 1 and Appendix E of the new edition of Robert Prechter’s Conquer the Crash) means that industrial production just experienced its worst decade since 1930-1939. Total manufacturing employment slipped to 11.7 million people, its lowest level since May 1941 when it was 33 percent of all jobs. According to Bianco Research, manufacturing now accounts for only about 9 percent of the workforce. Finance anchors the economy now, which makes it far more susceptible to non-rational dynamics.

As Prechter and Parker explain in “The Financial/Economic Dichotomy” (May 2007, Journal of Behavioral Finance), a financial system is not bound by the laws of supply and demand in the same way that an industrial economy is. In finance, confidence and fear rule decisions. “In the financial context,” say Prechter and Parker, “knowing what you think is not enough; you have to try to guess what everyone else will think.”

We do know one thing: When everyone is thinking the same, the opposite will happen.

Right now, record high dollar volume of trading shows that confidence, at least on this basis, has reached a new historic extreme.

Read the rest of the 10-page November 2009 Elliott Wave Financial Forecast now, when you signup for Elliott Wave International’s FreeWeek of U.S. forecasts. FreeWeek ends Nov. 11, so please act now to get an enormous wealth of current market analysis and forecasts — for free. Learn more about FreeWeek, and download the rest of this report and others for free here.

Steve Hochberg and Pete Kendall are co-editors of the Elliott Wave Financial Forecast.