Last week we reported that acclaimed fund manager John Hussman wrote that he believed the S&P overvalued by 40%.

In his latest newsletter, Hussman revisits the fundamental valuation of US equities – with a couple of interesting ratios and charts as well.  Hussman writes:

More sober and historically reliable measures of market valuation create a much more challenging picture. Apart from our own measures, which indicate continued overvaluation, there are several good indicators of market valuation that are not overly sensitive to year-to-year fluctuations in profit margins. One is based on the 10-year average of actual net (not operating) earnings, which is advocated by economist Robert Shiller, and another is Tobin’s “q” ratio which is based on comparing market value to replacement cost, and is advocated by Andrew Smithers. Both of these measures largely agree with our own measures, both presently and on a historical basis. Based on last week’s valuations, both suggest that the S&P 500 is substantially overvalued.

To illustrate this chart, he includes this chart, which outlines the two ratios since 1900.  The chart speaks for itself – you should buy stocks when they are below the line, and sell them when above: 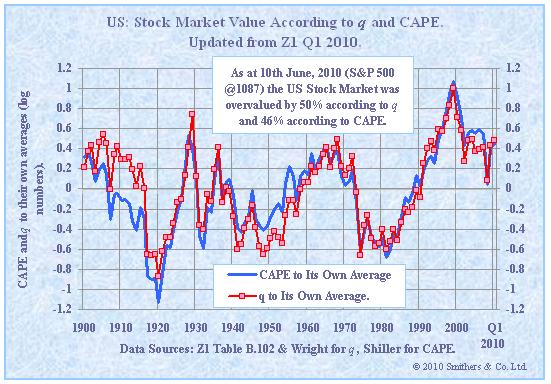 US Stock Market Value according to q and CAPE

With stocks significantly above the median line here, you’d want to be a seller, not a buyer, at these prices.  I maintain our stance that we probably have another 5-6 years of bear market left to get stocks down to a reasonable bear market bottom valuation.  According to the chart above, stock are more fairly priced than they were in 1999…but not yet even close to typical valuations at secular bear market bottoms.