Milton Friedman said that inflation is “always and everywhere a monetary phenomenon.”  Judging by the recent price action in many of the soft and agricultural commodities, they appear to agree.

Ben Bernanke, a student of the Great Depression, is making a bet the Friedman was wrong.  Bernanke believes that because Friedman did much of his work during a period of time when the velocity of money was relatively constant, he did not properly account for this factor in determining inflation.

Helicopter Ben is conducting this “Great Experiment” of money printing to stave off a Depression based on the monetary theory developed by economist Irving Fisher, who believed the Depression occurred because money velocity dropped off a cliff, and there was no increase in money supply to counter this.  Thus the US slipped into a deflationary spiral.

This is the big question – when the velocity of money drops, as it is today, should the money supply be increased?  Who’s right – Fisher or Friedman?

We don’t yet know – though, as always, the market will decide the winners and losers.  And lately it’s hard not to notice what the commodity markets have been telling us, especially agriculture.

First, let’s see Exhibit A – the adjusted monetary base of the US, which still appears to be in a “bull market”: 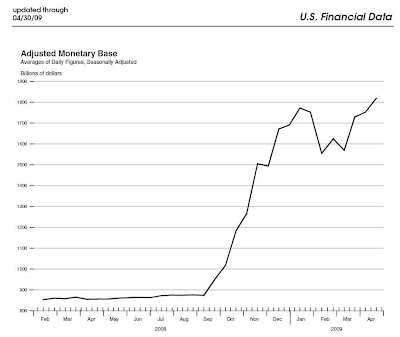 Many of us saw the initial spike and immediately yelled “Inflation!”  We loaded up and gold and ran for the hills.  And what happened?  The spike in monetary growth continued to grow to the sky, and gold got slammed – along with almost every other asset class.  (Save the US Dollar and US Treasuries – hats off if you had that trade, as you are a true “contrarian’s contrarian”!)

Fast forward to a few weeks ago, and we noticed that not only had commodities appeared to have formed a bottom, but they were starting to climb.

This week, we saw a full fledged break out in the softs and the grains – let’s quickly have a look at three of our current favorites.

Sugar futures – our old favorite – rallied over 5% this week, to close a shade under 15-cents.  Sugar’s been on a steady climb – fundamentals look quite appealing, as we discussed last week, and there’s no arguing with this chart:

Flash Player 9 or higher is required to view the chart Click here to download Flash Player now
View the full YO/K9-NM chart at Wikinvest
Cotton futures continued their strong rally, breaking right past the low 50’s resistance we were keeping an eye on:

Flash Player 9 or higher is required to view the chart Click here to download Flash Player now
View the full CT/K9-CT chart at Wikinvest
Finally take a look at Soybeans!  This rally was kicked off when soybean acreage came in below expectations, and it’s been off to the races ever since:

Flash Player 9 or higher is required to view the chart Click here to download Flash Player now
View the full S/K9-CB chart at Wikinvest
So which will it be, inflation or deflation?  Don’t get too hung up in economic theory – remember that the markets are always right.  And right now, these markets, buoyed as well by strong fundamentals, appear to be casting an emphatic vote for inflation!
Top Commodity and Economic News…
Current Futures Positions
Nothing new…unfortunately!  I thought about adding to the sugar position on Thursday – and I should have!  Will seriously look at adding another contract tomorrow or Tuesday on continued strength.
Date Position Qty Month/Yr Contract Entry Last Profit
04/08/09  Long  1 JUL 09 Orange Juice 81.95 85.10 $472.50

Editor’s Note: This article was also published by SeekingAlpha.com.