Should we use this dip to load up on dividend stocks?

It is always a good time to put high quality payers in our portfolio. Especially now, when their yields are noticeably higher than they were this time just last week.

However, please do note my emphasis on quality. “Junk dividends” are cheaper, too, but we should continue to steer clear of these. To show you what I mean, let’s pick on three money-losing stocks paying unreal high yields. I’m talking about 8.3% all the way up to 16 (per year, yes, you’re reading correctly.)

These particular yields, believe it or not, are likely to go even higher in the months ahead. But not for reasons that should attract you or me. No, these yields have upside because these stock prices have downside. Let’s take a look at these losers. Then, I’ll toss out some better “pullback-proof” payers for you to consider instead.

I’ve made my long-term view on Ford (F) crystal-clear:

Ford is fine for now, but in the long run it’s dead (more so than the rest of us),” I wrote in March 2019. “Driverless cars are on the way, and in the meantime, millennials aren’t buying many automobiles for themselves to drive around anyway. Ford is plenty profitable for now and is unlikely to see any dividend danger in the near term. But collecting payouts from a 20th century relic brings too much downside without the upside.

Ford perked up a little bit after that, but has since come back to earth and then some, plunging 18% – most of that amid the recent coronavirus dip.

China’s auto sales have plunged amid the coronavirus outbreak, and we could see a similar pattern emerge around the world. So in the very short-term, Ford could be in for a lot more pain.

Eventually, people will need to replace their cars; however, Ford won’t have the goods like they used to. Oh, Ford will still put out its high-margin trucks and SUVs, but it’s phasing out its sedan lineup. No more Taurus. No more Fiesta. The only car it will offer after 2022 is the Mustang.

Ford is changing its product lineup to reflect a shift in auto buying, but in doing so, it is ceding ground to the likes of Honda (HMC) and Toyota (TM). Moreover, it has to do so while perfectly threading a needle of shifting to hybrid and electric platforms, and dealing with a shrinking market as millennials shrug at autos.

Expect this yield to get even bigger – the wrong way. 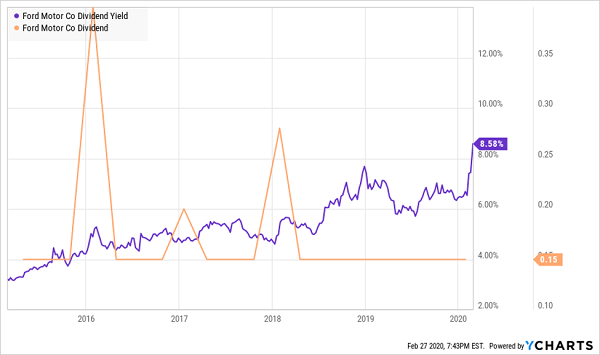 It’s not often that you find an energy stock that a.) yields anywhere near 10%, b.) is trading at a 50% discount to year-ago prices and c.) has the support of Warren Buffett. But that’s what we see in independent energy E&P player Occidental Petroleum (OXY).

Occidental Petroleum, now that it has merged with Anadarko Petroleum, is the No. 1 producer in the Permian DJ and Uinta basins (as well as a leader in several other countries, and, interestingly enough, a top producer of PVC and caustic soda).

It typically doesn’t pay to bet against the Oracle of Omaha. But back in mid-June 2019, I warned both about Occidental’s debt profile, and the fact that (at the time) Buffett had only invested via low-risk preferred shares. Since then, things have gone violently south.

OXY One of the Bigger Victims of Energy’s Brownout 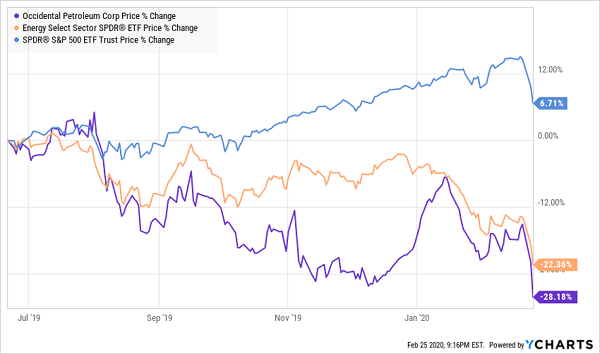 Buffett has since escalated his involvement, buying in each of the past two quarters to compile a $780 million stake. But I still can’t see Occidental as a buy-and-hold income generator.

Yes, the nearly 10% yield is as juicy as you can get out of the energy sector. But energy is cheap for a reason: Oil is in a bear market, in large part thanks to coronavirus-sparked global economic woes. And longer-term, more of the world is trying to shift away from fossil fuels toward renewables, restricting OXY’s long-term potential.

Occidental isn’t even cheap. It’s cheaper, courtesy of a 26% haircut in the past week. But it still trades at 31 times future earnings estimates—estimates that have OXY’s profits evaporating by 56% next year.

In November, I warned readers about not trusting the 20%-plus yield offered up by Gannett (GCI), which was just a couple days away from finalizing its merger with GateHouse parent New Media Investment Group.

Now, after a massive decline, it is still tough to trust this nearly 16% yield. 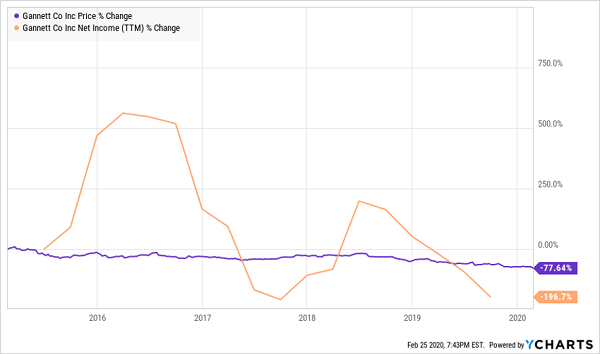 Yes, typically when yields go down, that’s because prices have gone up. But that old yield reflected GateHouse’s 38-cent pre-merger payout, which was higher than Gannett’s. The new yield reflects Gannett’s recently announced post-merger dividend of 19 cents per share.

And after its upcoming payout, GCI “will be permitted to pay cash dividends only in accordance with the limitations set forth in our credit facility.” That’s not encouraging.

Also, recall what I said back in November:

New Media’s GateHouse division and Gannett are two of the standard-bearers for stripping newspapers to the bone. … (Gannett) will continue trying to generate fat dividends and shareholder returns the only way it knows how: bleeding its products dry to the point where ever-fewer customers see any value in their subscriptions.

Fast-forward to today, and I’ve read that Ohio’s Columbus Dispatch is doing what’s been done at smaller papers: pushing deadlines up by hours so all the newspapers can be printed out of fewer presses. “That deadline change will be most noticeable in the Sports section, which will go to press about the time many evening sporting events are beginning,” the Dispatch writes.

Rewarding shareholders is great, but it’s shortsighted when it comes at the cost of your core business.

Sure, GCI shares are dirt-cheap, trading at just 0.2 times sales and just a hair over book, but who cares when that “book” is a shrinking number of presses and newspaper offices that even Gannett doesn’t seem to want? This stock is every bit as dangerous as it was three months ago.

The coronavirus scare and resulting market downturn is a not-so-subtle warning that the time for getting your retirement house into order is now.

Yes, you need considerable yields to fend off the bears. But the three gigantic dividends I just highlighted have no chance of saving you in the event of a prolonged downturn.

But my seven recession-proof “Hidden Yield” stocks were selected precisely for their resilience in a market like this one—and their ability to turbo-charge retirement accounts when the world gets back to normal.

These picks average 20% or more in total returns during bull markets. But what stock didn’t gain 20% during bull runs like we enjoyed in 2019? That’s the easy part.

What sets this pack apart are the 12% gains they’re capable of churning out in bear markets.

You never see these stocks touted on CNBC, Fox Business or any of the other major outlets. But it’s not because they’re risky. They’re certainly not dangerous.

They’re just too boring for the media to care.

The risks are piling up. The coronavirus outbreak has gone from stalling out China’s growth engine to threatening South Korea, Italy … and soon, possibly even the U.S. We still have a wild presidential election ahead of us. And who knows what the Fed will do in between.