Income Investors: How to Play the Pullback for 7% Dividends (and Gains)

What are we income-seekers to do after this latest pullback? Buy more? Sit on the sidelines?

It’s the question everyone’s asking. And while no one can predict the future, the past gives us some solid hints at what might be ahead, and the moves that make the most sense for our income portfolios (including a certain 7%-paying fund that’s more than worth your attention now).

To see what I’m getting at, let’s rewind to 2002. Then, like now, we were facing the potential of a pandemic: SARS in that case. There was other dreadful news, too: the dot-com bubble had just burst. The 9/11 tragedy made a lot of investors feel a kind of existential dread. Then SARS came along.

Stocks? Anyone who bought in at that time seemed foolish. Well, how did those fools do? 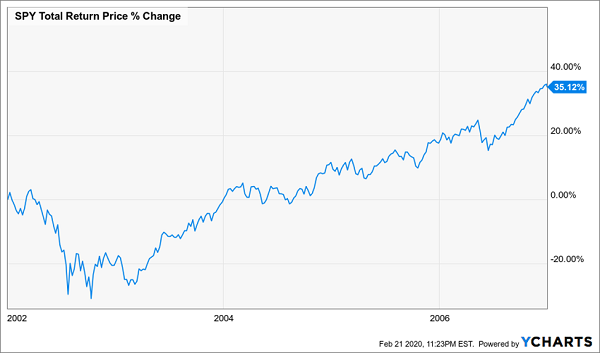 In five years, investors got an annualized 6.2% return on their investment; those who doubled down in late 2002, when SARS caused a selloff, did even better. And even with the Great Recession, stocks turned out to be a better option than real estate, represented by the orange line below. 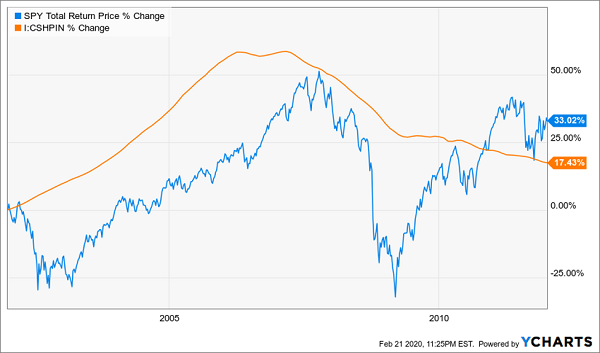 While it’s true that 2008 to 2012 were lost years for stock investors, who saw their overall returns stay about the same as in 2007, stocks did much better than houses in that timeframe. In the 10 years following 2002, home values rose about half as much as stocks. In short, stocks were the better investment all around.

And this remained true, even as housing fully recovered. 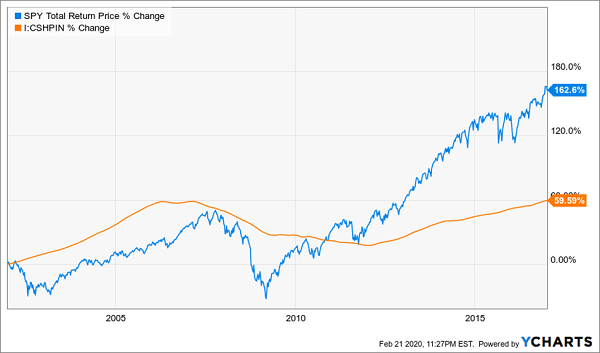 In 2017, the housing market had reached its post-bubble peak in most of the US, so real-estate investors were finally made whole. Good for them, but stock investors were sitting on a 162.6% return, more than double real estate’s gain.

In other words, investors who bought stocks during a period where the outlook was much worse for these assets did far better than the main alternative, and the longer they held, the better things got. That, incidentally, is why now is a great time to buy, especially if we see short-term market corrections.

Since stocks have been on a surge over the last decade, you might worry that a really big correction is on the horizon. But there’s a simple reason to doubt this conclusion: stocks actually haven’t been doing all that well.

Stocks Are Great for the Long Haul 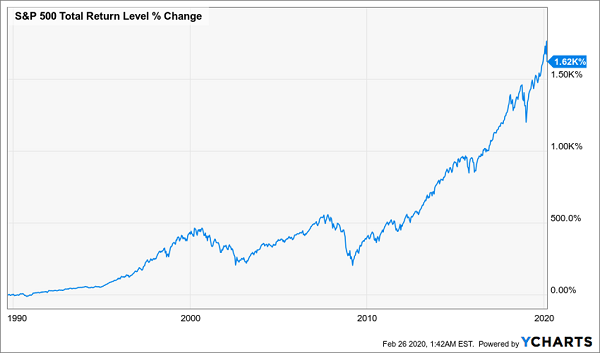 Since 1989, the S&P 500 has returned a whopping 1,620% on a total-return basis. That’s an annualized 10%, meaning the last 20 years have been underperforming the long-term trend by a huge margin!

If you aren’t fully convinced, you don’t have to buy the S&P 500. You can instead choose the Nuveen S&P 500 Buy-Write Income Fund (BXMX), which owns shares of companies in the index, like Apple (AAPL), JPMorgan Chase (JPM) and Facebook (FB). But it also writes call options against its portfolio—kind of like an insurance policy that slows BXMX’s losses in a downturn. This strategy also results in a larger cash income stream, which is why BXMX yields an impressive 7.1%, or four times what you’d get from an index fund.

That’s the kind of yield you’d get in rental income from real estate, but buying BXMX means you’re also exposed to the superior returns of the stock market, while also getting some downside protection. If that’s not the best of all worlds, I don’t know what is.

Ride the Correction to Fast 28%+ Returns. See How Here.

Thanks to this latest correction, a group of 5 closed-end funds (CEFs) is trading at bargain-basement discounts. Plus, their yields have ballooned: they’re paying an outstanding 8% average dividend now!

To put that in dollars and cents, if you dropped, say, $500K into these ultra-steady funds now, you’d kick-start a $40,000 yearly income stream—possibly enough to retire on dividends alone!

There’s more, though. Because those big discounts I mentioned a second ago have these 5 funds primed for fast 20% upside … I’m talking in the next 12 months. Plus, if the market takes another header, those big discounts give us some nice downside protection, too.

Add those projected price gains to your 8% average payout and you could be looking at a 28% total return just a year from now!

The full story is waiting for you. Click here and I’ll share it with you—including everything you need to know about these 5 funds: names, tickers, dividend histories, my unvarnished take on management and much more.