This “Preferred” Fund Crushes ETFs and Pays 7.3% in Cash

I get a lot of questions from readers about high-paying “preferred shares.” And most of these queries have one thing in common: worry!

You see, many of these folks are concerned that preferreds—known for their outsized dividend yields funded by safe cash flows—will get swamped as interest rates rise.

So today I’m going to show you why you can set these fears aside. Further on, I’ll reveal a preferred-stock fund that lets you rope in an outsized 7.3% cash dividend and price upside, too.

First, I should say that preferred shares aren’t alone in stoking investor fears. Other high-yield investments are, too, such as real estate trusts (REITs) and utilities.

And it is true that rising rates can hurt preferreds, but just in the short term. When we take the long view, we get a different story altogether.

To see what I mean, look no further than the yield on the 10-Year Treasury note, the pacesetter for fixed-income investments, not to mention mortgages and other loans.

Right now, that yield is stalled around 2.9%—right where it’s been since February. 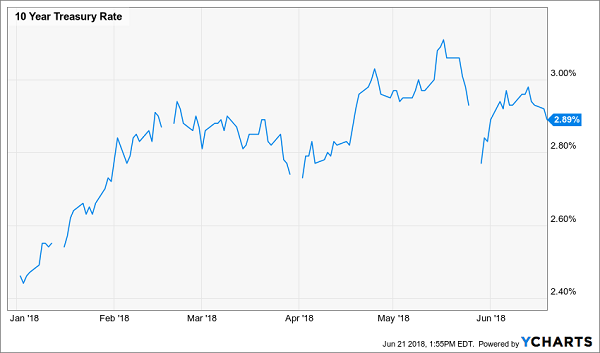 You’re not retiring on that! A million-dollar portfolio would spin off just $29,000 per year parked in Uncle Sam’s IOUs.

And at the rate we’re going, it will be somewhere around 2056 before the yield on the 10-Year gets anywhere near the payout on a preferred-stock fund throwing off a fat 7.3% dividend, like the one I’ll reveal below—if it ever does!

Second, rising rates are much less of a problem for preferreds because, as of 2015, more than 60% of preferred issues were floating-rate or fixed-to-float, compared to fewer than 10% a decade earlier. And that percentage has certainly headed upward since then. (Fixed-to-float securities pay a fixed rate for a set term before flipping to a floating rate.)

The upshot: these issues won’t fall in price as much as fixed-for-life securities during a rising-rate environment because their yields will reset higher as rates go up.

Before we go further, let’s talk just a little bit about how preferreds work.

Most investors only consider “common” stocks when they look for income. These are the shares in a company you get when you place an order with your broker, such as stock in blue chips like Johnson & Johnson (JNJ) and McDonald’s (MCD).

Preferreds are wonderful hybrids that offer aspects of both stocks and bonds. They can trade on an exchange, just like any common stock, but they trade around a par value and dole out a set regular payment, just like a bond.

Their biggest appeal is their excellent payouts. Many preferreds yield 6% and up.

Problem is, unless you want to spend your time poring over credit ratings, you’re in for some work here. That makes funds the best way to buy in, but don’t make the mistake of doing so through that old investor go-to, ETFs.

A 7.3% “Preferred” Yield That’s a Bargain in Disguise

Now don’t get me wrong: ETFs have their place—especially if, say, you’re just starting out and want to get your feet wet by tracking an index like the S&P 500.

But investing in preferreds through an ETF is a mistake, because in this corner of the market, a great manager with a solid track record is a must.

Case in point: the preferred fund we’ll discuss today: the Flaherty & Crumrine Preferred Securities Income Fund (FFC). Launched in 2003, it’s one of the older CEFs out there, and F&C’s expertise with preferreds goes back even further, to 1983.

What’s more, the two-person team in charge, Eric Chadwick and Bradford Stone, boast 51 years of experience between them. You’d be hard-pressed to find more preferred-stock know-how in one place than that.

Now if you simply read this far and dialed up FFC on a stock screener like Ycharts.com, you might think buying this fund is a fool’s game.

Look at the past decade of performance it has chalked up against the broader market—shown here through the SPDR S&P 500 ETF (SPY)—and the benchmark for preferred shares, the iShares S&P U.S. Preferred Stock Index Fund (PFF): 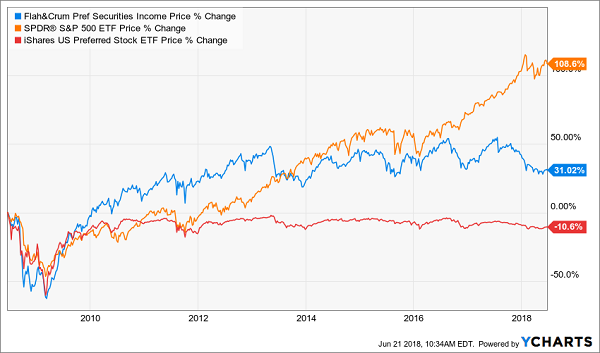 True, FFC crushed PFF, but a 31% gain over 10 years is pathetic. You would have more than tripled that gain if you had just dropped your cash into fan-favorite SPY and called it a day!

But keep in mind that FFC is a closed-end fund (CEF), a special type of fund that pays dividends way higher than you’ll get from your typical clue chip stock.

Dividends of 7%+ are common in the CEF space. FFC, for example, pays 7.3% as I write this—and it drops those payouts into your account monthly!

So let’s look at the above chart again, this time with dividends included: 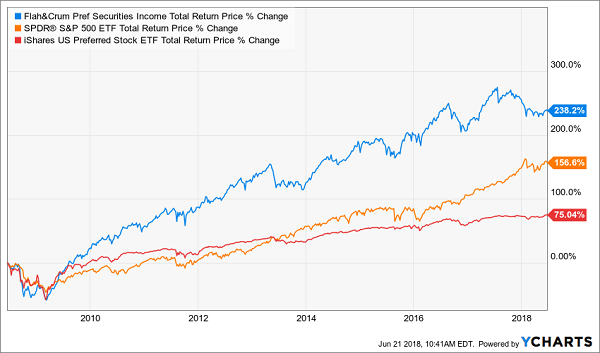 This is a mistake folks make again and again when they’re dipping a toe in CEFs. If you look at the chart for pretty well any CEF on price alone, it will be flat or down.

That causes many people to determine that CEFs are money losers and move on. Too bad for them! Because these folks are missing out on the many CEFs that beat the market regularly … simply because they’re looking at the wrong chart.

All of this works in our favor, though, because it lets us pick up off-the-radar funds like FFC at a discount. Let’s dive into that story now.

With CEFs, there’s one other key number you want to pay attention to: the discount to net asset value, or NAV. It’s simply the difference between the fund’s market price and the current value of all the holdings in its portfolio.

And with CEFs, that discount can get pretty wide indeed.

So our strategy here is simple: buy when the discount gets unusually wide—then ride the share price up as the markdown returns to its “normal” level. And thanks to overhyped rate fears, we’ve got a chance to grab FFC at a significant markdown: 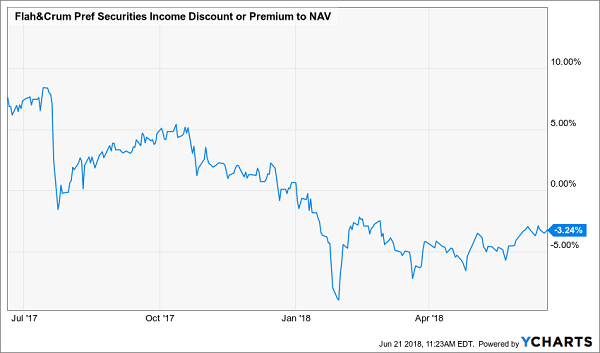 As you can see, FFC trades at a 3.2% discount to NAV, so we’re paying about 97 cents for every dollar of assets.

But in the past, investors have been willing to overpay, and not by a little, shelling out $1.08 for every buck of FFC a bit less than a year ago.

That’s not uncommon for the fund—folks have been willing to overpay for it more often than not. Look at all the times the blue line has climbed above 0%: 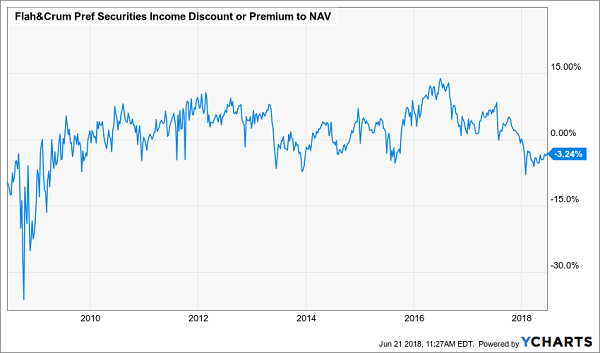 FFC is a powerful example of what it means to have a whip-smart team at the helm—especially when you venture a little outside the S&P 500 stocks most folks stick to.

And the value these experts bring doubles in a market collapse, because shrewd managers can make quick moves to keep your cash safe while you skate through, pocketing those mighty 7%+ dividends.

But as attractive as FFC is now, we can do even better, dialing our yield all the way up to a square 8.0%!

These 4 funds all trade at much wider discounts than FFC—I’m talking markdowns all the way up to 8.9%. That’s an insult to their savvy management teams—but it sets us up for massive upside while we collect these 4 funds’ 7%+ dividends!

When you add these 4 CEFs to the 4 other high-yield investments in my “8% No-Withdrawal Retirement Portfolio,” you get a rock-solid 8.0% average yield—enough to let many folks live on dividends alone, without having to sell a single stock in retirement!

Most investors know this is the right approach to retirement. Problem is, they don’t know how to find 8% yields to fund their lives.

That’s why I specialize in finding safe, under-the-radar high-income options like these.

Click here and I’ll give you the full tour of this portfolio and reveal the names, tickers and buy prices of the 8 proven income plays inside—including my 4 favorite CEFs—now.