Be careful how you buy your bonds. The most popular tickers have a few “fatal flaws” that’ll doom you to underperformance at best, or leave you hanging in the event of a market meltdown at worst!

Let’s pick on the widely followed and owned iShares iBoxx High Yield Corporate Bond ETF (HYG) as an example. It has attracted nearly $15 billion in assets because:

The accessibility of funds like HYG appears appears cute and comfortable enough. But remember, ETFs are marketing products. They are designed to attract capital, and not necessarily earn you a return on it.

Big money is spent on television, print and online advertisements. Less cash and thought is put into the actual income strategies that ETFs employ – and their lagging returns reflect it.

Let’s pick on the three biggest flaws most bond ETFs suffer from. Then, I’ll share a superior way to buy bonds that is just as easy.

Investors who typed in “HYB” instead of “HYG” have typo’d their way to a richer retirement. The closed-end fund (CEF) New America High Income Fund (HYB) is a better way to buy high paying bonds. It’s outperformed its ETF cousin by a 50% margin over the last 11 years: 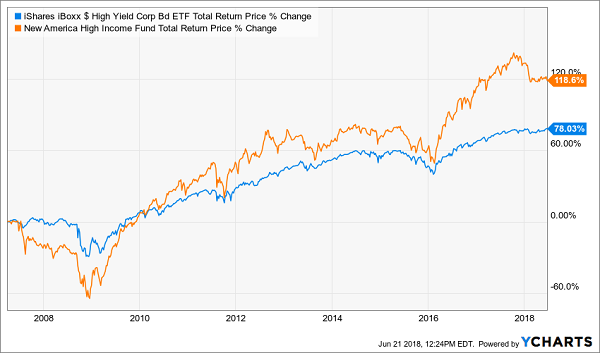 Since its own inception 30 years ago, HYB has delivered outstanding returns of 9.7% per year with most of it coming as cash distributions.

(The fund pays 7.7% today and it trades at an 11% discount to the street value of the bonds it holds. HYG pays 6% and trades at “par” to its portfolio.)

Here’s the main reason why bond indexing is bad. Let’s consider stock indexes, which are weighted by company size. Generally speaking, the larger the firm, the more it matters in the index’s performance.

If you “buy by size” in the debt markets, it’s counterproductive. Stock market value for indexes doesn’t include debt. But bond markets are all debt by definition. Follow the computers in Bond-ville and you’d maximize your exposure to the bonds of the firms that borrow the most money!

That’s the opposite of what we’re looking for in bonds, where our goal is to maximize our “coupon” (the percentage yield) while minimizing our risk (and making sure we get paid back our principal.) 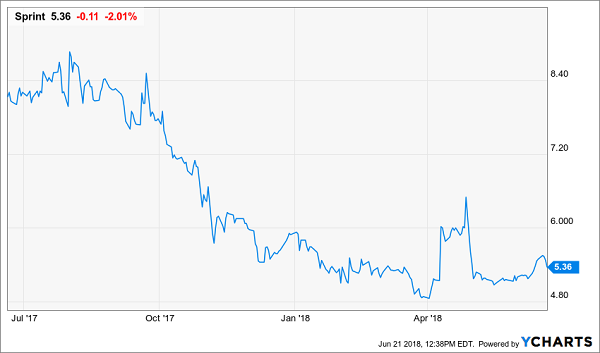 Will this highly indebted telecom dodge bankruptcy until these coupons expire? Perhaps. This is the type of decision that I’d trust to a human manager rather than a computer.

And here’s the “market meltdown” kicker on why you should always avoid bond ETFs:

They are subject to meltdowns if panic selling occurs.

Here’s why. If you sell HYG today, you’ll get your money in exchange for your shares. And it will be iShares’ problem to settle up their end (by selling those Sprint bonds and more).

Problem is, we’re talking about bonds rather than stocks here, and there is no readily available liquid market for that Sprint paper. Which means if a lot of selling occurs, HYG itself may take a hit if it has to unload its bonds at a discount (say, 70 or 80 cents on the dollar) to meet investors’ withdrawals.

CEFs like HYB don’t have this problem. They have fixed pools of assets, which help their managers ride out ups and downs. So as long as they buy good bonds that are funded by reliable cash flows, they’ll be fine.

CEFs are the underappreciated darling of savvy income investors. They are better bond bets for three reasons:

Add up these edges, and we have a superior long-term vehicle for fixed income returns. And we can buy them at a discount by being patient income-seeking contrarians. Which means we can do even better than the 9.7% that a fund like HYB provided over three decades by “cherry picking” our purchases.

HYB has only $200 million in assets, which is a very good thing. It can be much more nimble than HYG with its own buys and sells. And thanks to its CEF structure, manager Ellen Terry is never forced to sell her holdings low.

My colleague Michael Foster – our in-house CEF Professor – specializes in these types of under-the-radar CEF opportunities. (I nicknamed him “Professor Michael” because he crunches more numbers than anyone I know.)

The Professor has his computers cranking away to identify the best niche buys that are, quite frankly, not quite liquid enough for me to get my Contrarian Income Report subscribers in and out of efficiently. (Our 10,000+ CIR subscribers would move HYB’s price too much!)

Fortunately, that’s where Michael comes in. His CEF Insider publication is dedicated to diversified, nuanced 7%+ yields with 20%+ upside potential. If you like the idea of bagging bargain dividends and getting paid while you lock in big capital gains to boot, you’ll love The Professor’s research. Click here to learn more.