This Little-Known Fund Gets You a 7.3% Dividend From Blue Chip Stocks

In a plunging market like this one, it’s critical to play the long game. For us closed-end fund (CEF) investors, that means staying invested, because we simply do not want to be out of the market when the (inevitable!) bounce comes.

More important, we need to keep our income streams rolling in. They’ve never been more critical than they are now. And CEFs are throwing off some very healthy payouts these days, with the average CEF yielding north of 7% as I write this.

But there are a few things we can do to further reinforce our dividends and tone down our portfolio’s volatility. One strategy is to look at CEFs that sell covered calls. This is a lower-risk way for these funds to generate extra income, which they then hand over to us as dividends.

One covered-call CEF that should be at the top of your list is the Nuveen S&P 500 Dynamic Overwrite Fund (SPXX), a 7.3% yielder that, as the name suggests, holds all the blue-chip companies in the S&P 500.

So if you’re holding, say, the go-to index fund, the SPDR S&P 500 ETF Trust (SPY), with its 1.3% yield, you can drop the “Y” on the end of its ticker and sub in an “XX” and get a dividend nearly six times bigger from the same underlying stocks.

We’ll flush out SPXX’s strategy and story in a moment. First, though, it’s important to fit the fund into the economy we’re dealing with now, because I think we can all agree that this is a bizarre and difficult time, with stocks falling, corporate profits still on the rise (despite last week’s disappointing earnings reports from Wal-Mart and Target) and inflation running hot. Funnily enough, this is actually a decent setup for SPXX.

Look Beyond the Headlines on Inflation

Let’s start with inflation, which sizzled at an 8.3% rate in April. That’s undoubtedly high, but there are a couple underlying trends here that are important to note—and that you rarely hear discussed in the press. Both of them nicely feed into SPXX’s approach.

First, inflation is actually ticking downward (albeit slowly) from 8.5% in March to 8.3% in April to an expected 7.6% in May, according to a recent survey of economists. That’s good news, but there’s another narrative that’s getting missed here: companies are using inflation as an excuse to increase prices across the board. After all, if they were simply handing off their own rising costs to consumers, would corporate profits look like this? 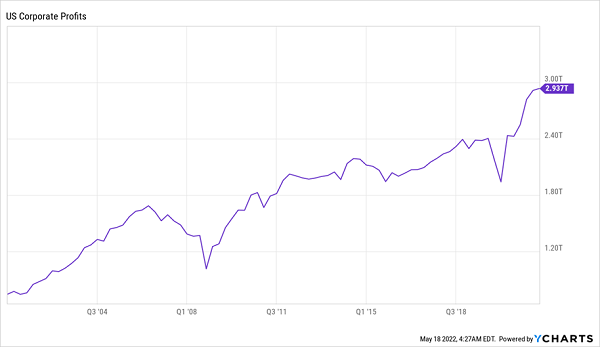 Of course not! Disappointing as this is, it’s an opportunity for us, which we’ll tap into with SPXX.

And the truth is, this approach is still working for Corporate America, and it’s likely to continue to do so for some months, because there are still plenty of signs that the American consumer is happy to pay up.

To see what I mean, consider food prices. Unlike inflation broadly, which ticked down in April, as we just saw, food costs have stayed high, jumping 10.8% from the prior year. You’d think this would prompt Americans to cut back on their overall spending, with more of their money going into the grocery-store cash register.

But that’s not the case right now. You see, when Americans cut back, the first place it usually shows up is in restaurant spending, which is the ultimate in discretionary purchases.

Right now, however, the opposite is the case: restaurant sales increased 19% in April from a year ago, indicating that high inflation isn’t driving Americans to cut costs and stay home. (And sure, you could argue that we’re comparing last April’s sales to those in April 2021, when lockdowns were widespread, but restaurant sales still rose a strong 2% in April from the previous month.)

This, of course, sounds surprising, but it highlights the large amount of money consumers saved during the pandemic—funds they’re still working on spending down. That, in turn, is prompting companies to jack up prices.

The Real Story Behind the Market Correction

So if profits are still rising and consumers are still flush, why have stocks sold off so aggressively? The Fed’s rate hikes are one reason, to be sure. But in other ways, this is a good old-fashioned reversion to the mean.

Let’s look at both recent and distant history: over the last five years, stocks have risen an annualized 11.6%. But over the last century, stocks have gone up an average of about 8% per year, so we’re doing much better than average, even after the selloff.

But had we kept at the price levels we were holding before the selloff, we’d be looking at a 14.5% annualized return over the last five years, or nearly double the long-term average.

A correction was healthy, especially before the inflation data started to look a touch better. Now that it is improving (again, albeit slowly), this selloff is starting to get a bit long in the tooth.

But according to historical research, corrections can take around six months to find a bottom, and the market peak was about 5.5 months ago, so stocks may continue to correct for a bit longer.

A 7.3% Dividend Built for This Reshuffling Market

That brings us back to SPXX, which, as I said, is tailor-made for a situation like this because the fund lets us buy into the S&P 500 and collect its 7.3% dividend.

Then there’s SPXX’s covered-call strategy, which, as I said earlier, works well in volatile markets. Covered calls are a type of contract that gives speculators the option to buy our CEFs’ stocks in the future, at a set price stipulated in the contract. In exchange, the speculators hand over cash, which the funds give us in the form of dividends.

There are two ways for these deals to play out: either the stock hits the price—called the “strike price” in option-speak—and gets sold (or “called away”) or it doesn’t, and the fund keeps it. The key is that the fund gets to keep the amount it charges (called a “premium”) either way.

That supports SPXX’s high dividend, which, in turn, gives you more of your return in cash. And if you let those funds build up in your portfolio, they’ll act as a natural counterweight to your investments and help reduce your overall volatility.

5 Strong 7.9%-Yielding CEF Dividends to Get You Through This Crisis

SPXX is just the start. I’ve compiled a “mini-portfolio” of 5 other CEFs paying dividends yielding even more: I’m talking about a 7.9% yield, on average.

Sturdy payouts like these are exactly what we need to guide us through this mess and over to the other side. What’s more, these 5 CEFs are terrific bargains, trading at unusual discounts I expect to disappear when this market (inevitably) bounces.

Now is the time to buy them, and I’m ready to share my research on all 5 of them with you.

Click here and I’ll give you a full investor briefing on my CEF investing strategy, explain why you rarely hear about CEFs in the media (despite their high dividends) and show you how to access the names, tickers and my research on these 5 undervalued 7.9%+ yielding CEF picks.