Thanks to the market’s selloff, we finally have some dividend deals out there. In a moment, I’ll highlight a five-pack of sweet-paying dividend stocks (as in, 4.0% to 11.3% yields) that are cheap cash cows.

It’s important that we focus on value, cash flow and yield as we cherry pick the bargain bin. More pain is likely ahead for the broader markets.

Stocks have been a dumpster fire in 2022 because the Federal Reserve is turning off its money printer. The Fed’s balance sheet growth is flattening (already a problem for equities) and will shrink soon:

What people might not know is just how weak all stocks are.

A Bear Market, But Basically Just for Tech, Right? 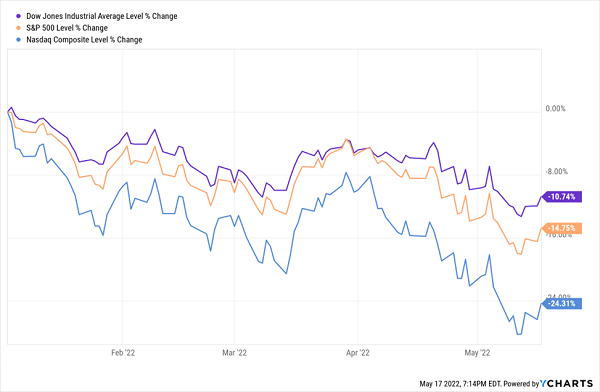 The Nasdaq is well in bear-market territory this year, driven lower by a Wall Street that suddenly cares about valuations; uber frothy tech components have been yanked back to earth. But the Dow and even the S&P 500 are still in the midst of “mere” correction territory—not great, obviously, but how bad could it be?

Pretty bad, as it turns out. 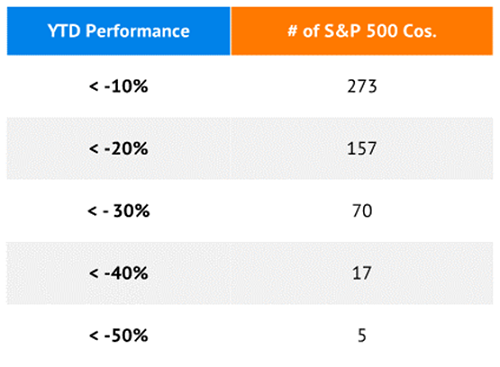 That’s miserable news for current shareholders, but great if you’re like me and on the hunt for a deal. But we have to be careful, as relying on simple traditional measures of valuation could backfire when we evaluate distressed stocks.

Take price-to-earnings, or P/E—it’s one of the most basic metrics that all investors are taught to put to work. But it’s also based on net income, which ultimately is an accounting measure that’s pretty easy to manipulate. Forward P/E, while at least looking ahead, has a similar issue.

That’s why, when I want to make sure I’m getting a true bargain (and not just a cheap stock), I want to home in on price-to-free cash flow, or FCF.

Free cash flow is a snapshot of how much cash a company is making once it has paid the cost of maintaining and growing its business. And unlike net income, EBITDA and other “adjustable” measures, cash can’t be “adjusted.”

And on that basis, the following five high-yielding dividend payers are priced to sell. That means we have the opportunity to not only pick up a few annual payouts of between 4.0% and 11.3%, but improve our odds of enjoying ample price appreciation over time.

Navient (NAVI) is a servicer and collector of student loans, and while you’d think that would make it a no-brainer investment given the state of America’s constantly rising education costs, shareholders would tell you otherwise.

Navient has serviced more than $300 billion worth of loans across 12 million student loan customers across nearly a half-century of existence. And the cost of a college education, which has done nothing but spiked over the past few decades, is expected to continue ramping up almost shamelessly in the future.

Source: MEFA.org (Note: All numbers are estimates only.)

And yet, here’s what investing in NAVI has been like over the past decade or so.

Navient Has Been Held Back 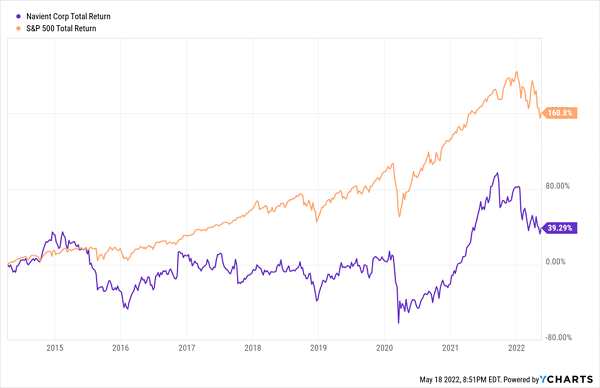 Navient was spun off from Sallie Mae in 2014 to handle federal student loans, and has had a dicey history from there. It has since faced multiple lawsuits, including from several states and the Consumer Financial Protection Bureau. And at times, this litigation has been costly. Consider this announcement from earlier in 2022 (emphasis mine):

Navient also faces uncertainty thanks to the Biden administration, which in April once again extended a student loan repayment freeze.

It’s possible that NAVI does indeed provide some value here. Shares are off by nearly a quarter from their early January highs, and that has dragged its P/FCF ratio down into the mid-single digits. And an eventual return to normal on the student loan front could be a future trigger for a Navient rally.

Just understand that this isn’t one of the easiest stocks to hold. Its decent yield helps, but given no growth in the dividend for years, the purchasing power of that payout is quickly being whittled down by inflation.

These two materials blue chips are birds of a feather. They’re both multinational chemical giants. They’ve both delivered market-shattering gains of roughly 17% apiece in 2022. Both are trading very much on the cheap. And both offer up 4%+ plus dividends that are well supported by free cash flow.

Like with Navient, materials stocks like LyondellBasell and Dow can be tough on the nerves over the long term. That’s because both names are the very definition of cyclical, rising and falling with the globe’s economic fates.

But at the moment—and for the foreseeable future—rising commodity prices and robust demand are plumping up both firms’ top and bottom lines. LyondellBasell reported a 45% YoY jump in sales last quarter, for instance, which flowed down to a 26% pop in net income. Dow’s net revenues improved by 29% last quarter, while profits were a whopping 72% higher.

If I had to give an edge to either, though, it would be LYB, which has raised its payout a modest 25% over the past five years and currently only pays out 25.7% of its income as dividends—a low figure that’s easily maintainable when the cycle ultimately turns back against the chemicals firm. Dow—a Dog of the Dow to start the year—isn’t much worse, at 30%, but the company hasn’t pushed its dividend higher by a red cent since being spun out from DowDuPont.

Vector Group (VGR) is a holding company, though it’s decidedly not a very diversified one.

One part of its business is a tobacco firm composed of the Vector Tobacco and Liggett Group subsidiaries, which include brands such as Even, Pyramid, Liggett Select and Eagle 20’s discount cigarettes. The other part is New Valley, which owns real estate investments in California and New York, among other places, as well as real estate brokerages in several states. (It also once boasted the Douglas Elliman real estate agency, but at the end of 2021, Vector spun it off into a new publicly traded company.)

Its overall business has been surprisingly resilient given that just about every government in the world is putting the squeeze to Big Tobacco. But nonetheless, in 2020, the company broke a two-decade string of dividend increases by slashing its payout in half.

I discussed this stock just a couple of months ago, noting at the time that a “roughly one-third drop in VGR shares is largely attributable to the price readjustment from the Douglas Elliman spinoff, so there’s little new ‘value’ here—just a trick of the numbers.

Credit where credit is due: Vector Group’s stock has gone on a nice run since then—a run that looks even better when you consider the market is lower by the same amount, and it’s still value-priced by the difficult-to-argue P/FCF metric. 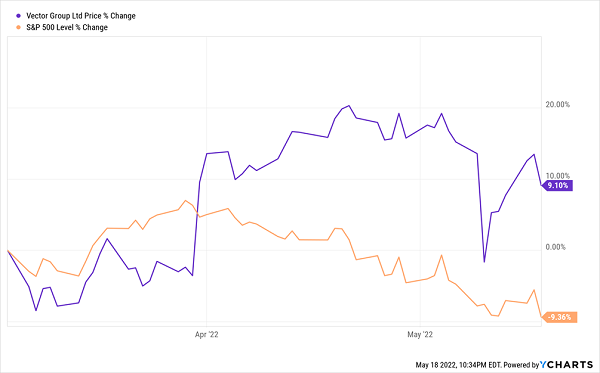 But it’s not surprising that such a high-income, defensive stock has been on the rise as Wall Street’s panic meter has spiked. Indeed, investors might continue to pile into VGR’s 6%-yielding shares over the short term should volatility continue to rule the day.

Longer-term, however, you’re still hitching your wagon to a product that’s in crosshairs the world over. It’s a tough gamble for a retirement paycheck, especially so soon after management proved that it doesn’t hold its dividend dear.

Apollo Commercial Real Estate Finance (ARI) is a mortgage real estate investment trust (mREIT) that originates and invests in senior mortgages and mezzanine loans and other commercial real estate (CRE) debt across the U.S. and Europe.

As of their March investor presentation, ARI boasted a $8.4 billion global debt portfolio, with 91% of that in first mortgage loans. The portfolio consists of 67 loans with heavy weights in office (24%) and hotel (21%) real estate, with other investments in residential for sale, retail, healthcare and other real estate.

While the current market environment is pulling down just about everything in sight (including ARI), it could be worse.

Apollo Is Weathering a Tough Fight in 2022 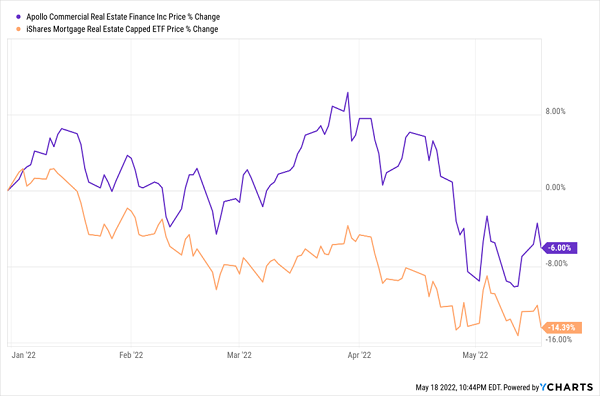 You can thank a portfolio that’s 98% “floating rate”—a boon if interest rates keep rising, which seems like a given at this point. Though it’s not a perfectly straight line where the higher interest rates go, the better ARI will do. Raymond James analyst Stephen Laws explains, “Given’s ARI’s portfolio and financing characteristics, the next ~75 bp of short-term rate increases are largely neutral to portfolio returns, with increases above 75 bp expected to be a tailwind.” The Fed is expected to raise rates at least 100 basis points over its next two meetings, so ARI should enjoy that tailwind sometime in summertime.

Just keep a close eye on Apollo CRE’s payout coverage. This mREIT snipped its dividend from 46 cents per share to 40 cents, then again to 35 cents, in 2020, and it hasn’t budged on moving it back toward pre-cut levels. So while the yield is excellent, it’s not necessarily one of the safest dividends you can buy.

The market’s recent downturn hasn’t done investors many favors, but it has had at least one screaming benefit:

It has momentarily nudged some of the market’s best high-yield dividend names back into “BUY NOW!” territory.

My “Perfect Income” portfolio features some of the most generous, yet stable, dividend investments I’ve found. The only problem: In normal market conditions, they tend to trade at lofty valuations thanks to their clear performance potential. But every now and again, when the market throws a fit, Wall Street throws the baby out with the bathwater and gives us a chance to buy even more on the cheap.