This 9.4% Dividend Is a Trap Ready to Spring. Sell Now!

A little over two months ago, in an article for Contrarian Outlook, I spotlighted a nice short-term buying opportunity in the PIMCO Global StocksPlus & Income Fund (PGP).

PGP, with its 9.4% current dividend yield, is one of the most popular PIMCO funds, but it is one with a checkered past. And by checkered, I mean this:

Not for the Faint of Heart! 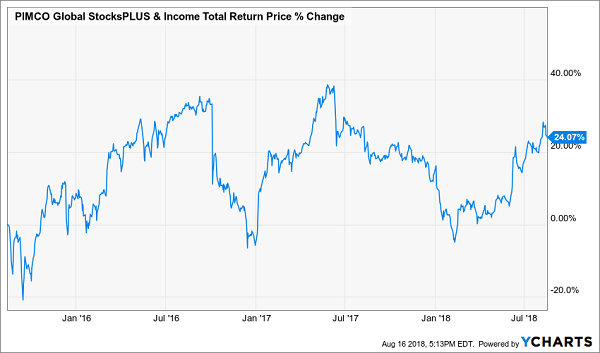 With up and down swings of 20% and more in a matter of months, PGP is a really volatile fund. And note those big dips in mid-2016 and mid-2017. There’s only one reason why huge drops like those appear for a closed-end fund (CEF) like PGP: dividend cuts. 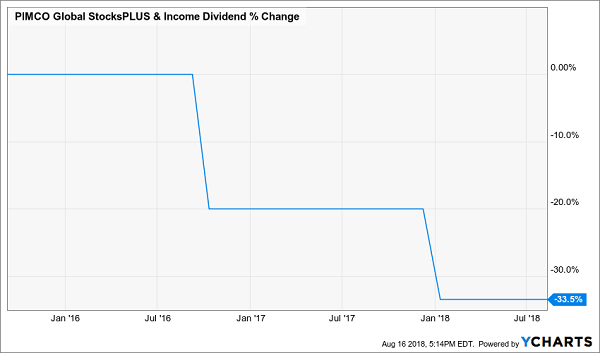 PGP has cut its dividend twice in the last three years, and that’s likely just the beginning.

Over the last six months, PGP has earned less than three-quarters of its dividend payout, although dividend coverage has been improving in the last couple months. Still, that’s unlikely to last long, because of PGP’s portfolio.

Despite the name, PGP’s portfolio doesn’t have many stocks in it—in fact, stocks make up less than 10% of the fund’s holdings. Instead, PGP has a lot of bonds—and since management is betting on rising interest rates, many of PGP’s holdings are short-term bonds that have really small yields. 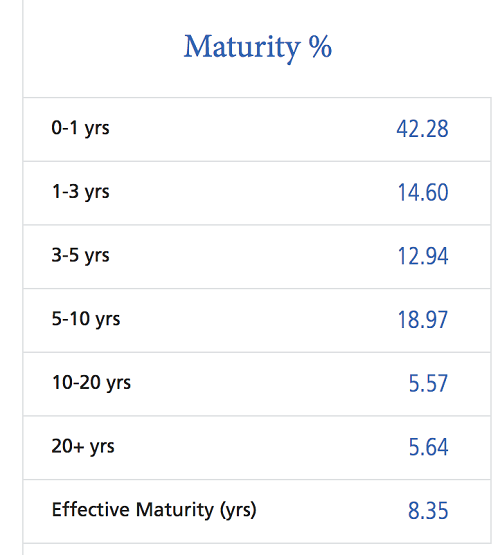 That’s a decent strategy for total returns, but it also means that PGP will likely cut its dividend again before the end of the year to make sure it isn’t forced to sell its holdings to cover its payout, thereby driving down its net asset value (NAV, or the market value of its portfolio).

And that won’t be pretty for shareholders.

On January 2, 2018, PGP announced that it would cut its distributions by 16.8%, to their current level. The fund immediately did this: 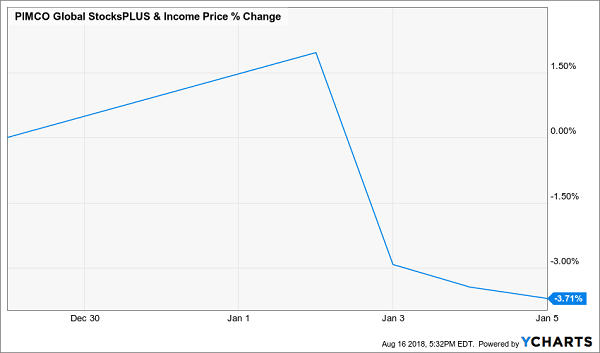 That was just the beginning. PGP kept falling and never fully recovered until I recommended it in June: 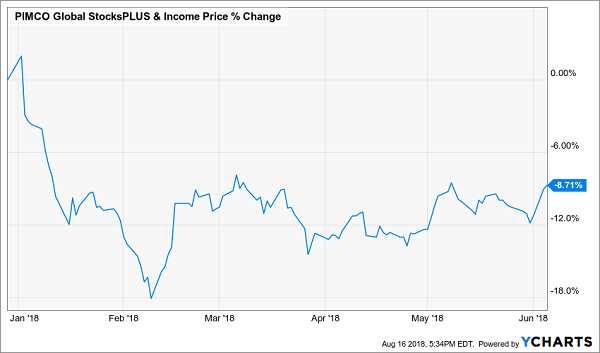 This chart tracks PGP’s price action until June 7, when I wrote in my article that this fund looked attractive. The reason? Its premium was far lower than its average level, and the investor pile-in was perfectly primed. Here’s how PGP has performed since then: 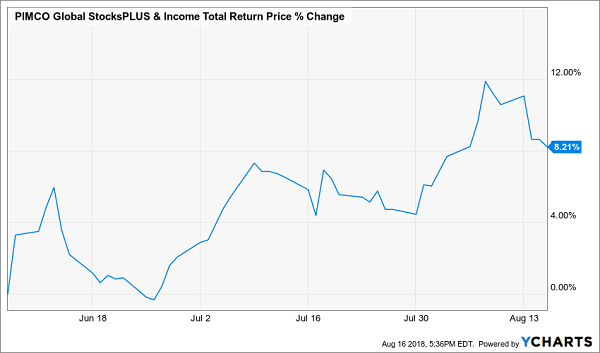 With dividends included, we’re up 8.2% since my article published—not a bad return for two-and-a-half months! But all good things must come to an end.

So why is now the time to dump PGP? That’s a story that can be told with one chart:

Back to the Status Quo 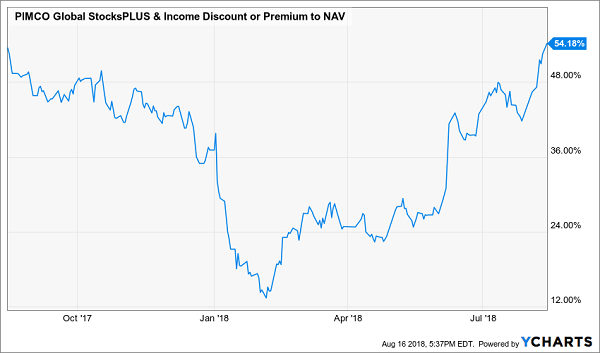 You read that right: after dipping to a premium of under 20%, PGP’s premium to NAV has steadily soared to 54.2% since my June article, which is just about the same as PGP’s average premium of 53.3% over the last decade.

There is a chance that this fund’s premium could soar higher—we’ve seen it shoot up to over 100% before! And I wouldn’t be surprised to see PGP’s premium go above 60% before it starts climbing down—but there’s a risk that it never will hit those heights, which means holding on to PGP right now, after such a big short-term gain, could run the risk of being left holding the bag when the market realizes this fund’s premium has gotten too high.

But there’s another red flag.

Whenever you want to judge a CEF’s real performance, you need to look at the total NAV return, which calculates the portfolio’s return including dividends.

On that mark, PGP is about flat so far this year—which is pretty close to what the junk-bond index funds have done for 2018. (These are the closest index funds to PGP, considering its heavy focus on corporate bonds and derivatives.)

However, that performance is far worse than PIMCO’s other junk-bond and derivative funds, the PIMCO Dynamic Credit and Mortgage Income Fund (PCI)—orange line below—and the PIMCO High Income Fund (PHK), in red, which are up solidly (and with little volatility) in 2018, despite a tough environment for junk bonds:

PGP Falls Off the Pace 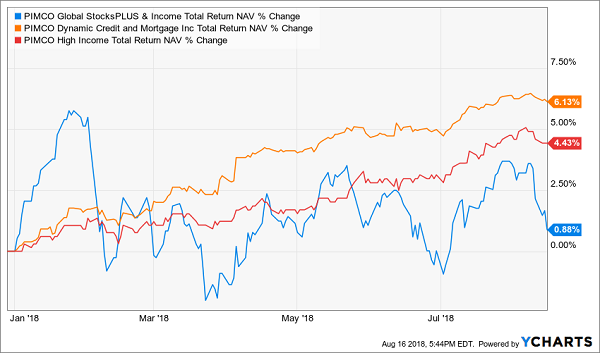 Yet PHK’s premium is far less than that of PGP, at 36.2%. And PCI? That fund is trading at a measly 1.3% premium, one of the smallest premiums for a PIMCO fund.

That means PGP could fall a long way before its premium matches those of its better-performing peers.

And forget about pricey premiums like the one on PGP!

Because why would we pay $1.54 for every dollar of assets when we could pay less than $1 for every buck of an entire diversified portfolio?

(These 5 quick buys will get you stocks from all corners of the market—pharma, real estate investment trusts, big-cap tech names and more, including one intriguing fund paying a 7.1% dividend that rises with rates!)

The massive discounts on all 5 of these funds are the key to the 20%+ price upside I see coming from these picks in the next 12 months! PLUS, these 5 amazing funds also pay dividends up to 5 TIMES more your typical stock—up to 10.0%!

So you’re getting paid very handsomely while you wait for these funds’ discount windows to slam shut … and slingshot us to those huge 20%+ price gains.

I can’t wait to show you all 5 of these high-powered CEFs close up. All you have to do is CLICK HERE to get the full story (names, tickers, buy-under prices and everything you need to know) right now!