We’ve finally got something (two things, in fact!) working for us dividend investors in this dumpster-fire market:

The last time this “double-profit” setup appeared, after the 2018 midterms, we tapped it for a 57% return. That win was driven by a payout that grew quarterly.

Now we’ve got a chance to pull off the same feat again—with the same ticker we used then, too! This kind of opportunity is very rare indeed—only appearing once every four years. So let’s break down the details.

“Stock Season” Is On

Our first “profit kicker” here is nothing less than the most reliable pattern in investing: the fact that stocks deliver most of their gains from November 1 to April 30.

This is where the saying “Sell in May and go away comes from.” But unlike most investor slogans, this one has some truth to it. According to Fidelity Investments, since 1990, the S&P 500 gained an average of about 7% from November 1 to April 30, compared to just 2% for the rest of the year.

Now that we’ve established our first edge, let’s move on to the second: the midterms—and what always happens in their wake.

Buying After the Midterms Pays Off Big

The numbers, from US Bancorp (UBS), are compelling. The bank looked at the three-, six- and 12-month periods following the last 15 midterms. Its findings? In the three months following E-Day, stocks were up in all but four periods, with an average gain of 7.3%.

We’ll happily take those odds! But go out further and things look even better: stocks were positive in all cases six months out from the election, with a 15.1% average return. Twelve months and average returns jumped to 16.3%.

We’re also getting an assist from the fact that markets usually lose ground in the 12 months leading up to the midterms, giving them a “springboard” post-election. I know I don’t have to tell you that we’ve got a healthy “springboard” this time, with the S&P 500 down 20% or so in the last year.

Put those two things together and you’ve got a “once in four years” buy window. And when you add another element—a stock with “runaway” dividend growth—you’ve got something truly special indeed.

And there are very few stocks with the payout growth cell-tower “landlord” American Tower (AMT) boasts. It’s a real estate investment trust (REIT) we bought in my Hidden Yields service on November 16, 2018, just after the last midterms.

AMT is a “toll bridge” for our bottomless appetite for mobile data. It charges its “tenants,” including Verizon Communications (VZ), T-Mobile US (TMUS) and AT&T (T), to use its 43,000 towers in Canada and the US (and 180,000 overseas).

American Tower has zero worries about new competitors encroaching on its turf: it’s part of what’s basically an oligopoly, with control over the American cell-tower market split between it, Crown Castle International (CCI) and SBA Communications (SBAC).

(Speaking of Crown Castle, last week we flagged a big insider purchase at the company—to the tune of $150,397—that’s a bullish sign for the stock.)

Most of all, we love American Tower’s “Dividend Magnet,” or the power of its soaring payout to ignite its share price. It’s a phenomenon we’ve seen over and over again in dividend stocks.

And sure enough, this is exactly what happened during our holding period: AMT’s dividend surged 64% in less than three-and-a-half years. Its “magnetized” share price followed right along, jumping 48%, to deliver us that 57% total return I mentioned off the top: 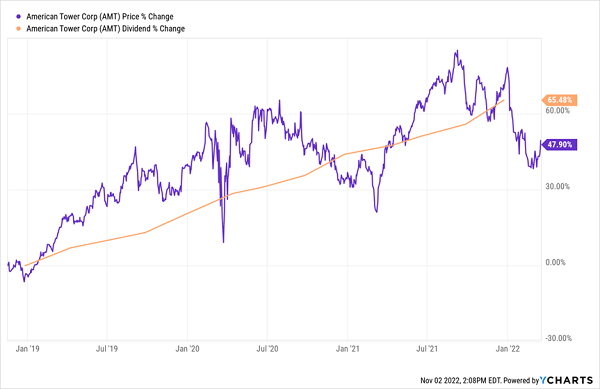 Fast-forward to today and AMT is again on our Hidden Yields watch list after it dipped 14% since we sold in March. That’s overdone for a company whose dividend rises quarterly and accounts for a safe (for a REIT with steady income like AMT) 61% of the midpoint of the company’s 2023 cash-flow forecast. The stock’s dividend growth has also crushed the broader market since we initially bought back in ’18: 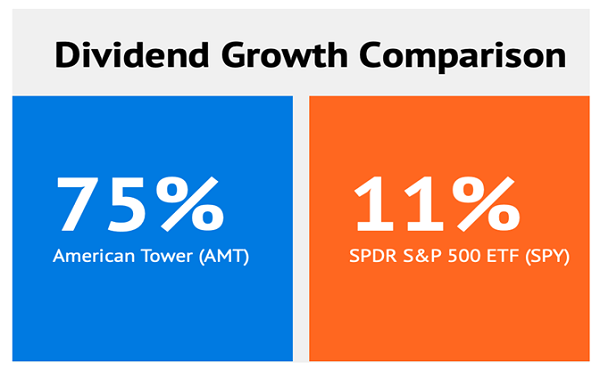 Here’s another profit “kicker”: thanks to the pullback, AMT yields a historically high 2.8% now: 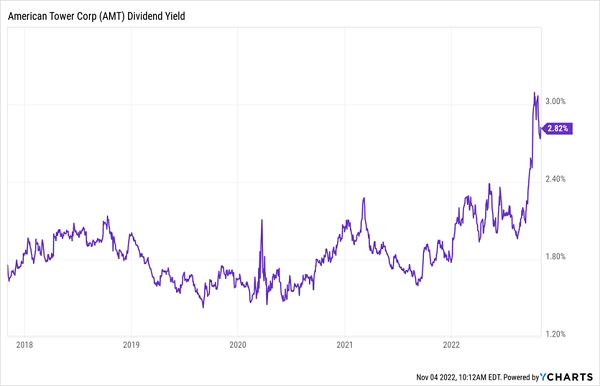 Since AMT raises its payout every quarter, the yield on a buy made today will start growing in just a few months. And we can still look forward to a likely rise in price, thanks to the midterm effect and “stock season,” too.

Let’s be honest: a recession is coming next year. Jay Powell knows it full well—he just can’t say it in his meandering press conferences!

Instead he relies on empty utterances like “The path to a soft landing is narrowing.” But you and I know the score. And so does everyone else.

We need to get ready. The first step: weed out weak payers in your portfolio and make sure you’re laser-focused on stocks with strong cash flows and sturdy dividend growth.

“Tollbooth” plays like American Tower are a great example. But there are plenty more out there, like the 7 other stout dividend growers I’m pounding the table on now.

Like AMT, these 7 overlooked stocks throw off dividends that aren’t just growing—they’re accelerating. And these companies’ solid cash flows are backed by businesses that can withstand anything the Fed, or the economy, can throw at them.

Best of all, they’re screaming bargains now. Their low valuations set us up for upside in the long run and help insulate their stocks in the coming pullback.

Don’t be without these stout dividend growers. Click here and I’ll share the vitals on all 7 of them—including their names, tickers, current yields and dividend-growth histories—in an exclusive Special Report.