Jerome Powell’s latest trip before the microphone has opened up a surprising opportunity for us dividend investors.

I have three funds for you that are deeply discounted in the wake of the Fed chair’s press conference last week, following the release of the latest rate decision. Buying this trio now also sets you up for dividends ranging from 9.7% to a stunning 12.5%.

Before we get to them, let’s set the stage by zeroing in on exactly what happened last Wednesday, from the time the Fed’s decision and seemingly dovish statement were released until after Powell was finished speaking at the following press conference. 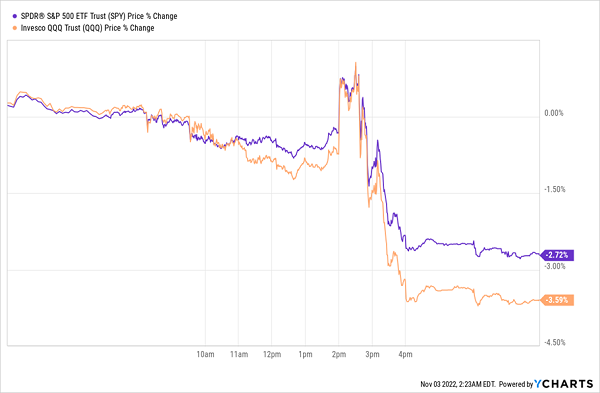 On the surface, the chart above makes it look like investors noted the Fed’s 75-basis-point rate hike, its future plans, and panicked. But look closer: the market was up after the Fed’s initial release at 2 p.m., and it stayed up for quite some time.

This is important because it shows that the data and the Fed’s intentions aren’t what caused the selloff. It was Jerome Powell’s responses in the press conference afterward.

But of course, Powell didn’t change his mind in the hour between the release and the press conference. And even if he did, he isn’t an autocrat. The rest of the Federal Open Market Committee has to agree on rate hikes, as well.

So from an objective point of view, nothing much has changed, and this selloff was driven solely by fear after Powell said rates may have to go higher than expected, and that the path to a “soft landing” has narrowed.

If this sounds like a reason to sell, it isn’t. Stocks have been pricing in a deep recession throughout 2022, meaning that even a hint of good economic news sends markets rallying.

To be sure, it may take time for that good news to get the S&P 500 on a solid upward path again, but the long-term direction of the market has been up for over a century in the US. There’s little reason to think that has ended (especially since it’s likely the Fed will still pause rate hikes early in 2023, which could lead to cuts later in the year).

To be honest, all of this feels a lot like 2018, another time when stocks were punished as the Fed aggressively hiked rates. 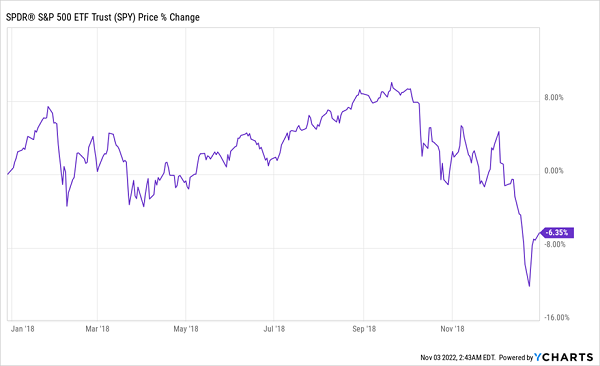 Back then, I heard from plenty of readers who were very worried about their portfolios. Those fears turned out to be overwrought: starting with a Santa Claus rally following an exhausted bear market in 2018, stocks have returned an annualized 13% since the end of that year. 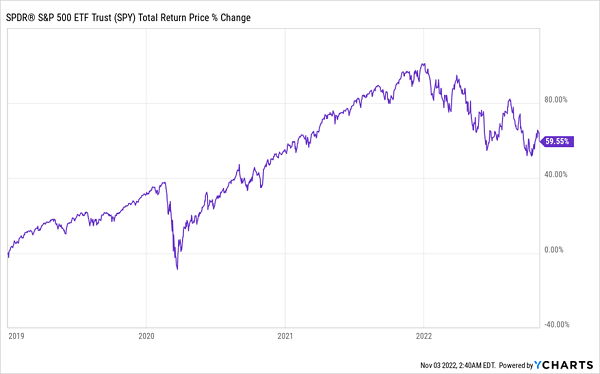 And note how the dip in stocks this year is about double what it was in 2018. This points to significant upside for contrarians focused on the long term.

Active Management Is Key—and CEFs Give Us Just That (and 10%+ Yields, Too)

Of course, picking winning stocks and avoiding losers is hard. And if you buy into the entire stock market at once, through an index fund, say, you’ll end up holding bombs like Meta (META), the Facebook parent company whose poor management has outraged shareholders.

At the same time, other S&P 500 companies are surging, particularly on the energy side: shale-oil producer Hess Corporation (HES), for example, is up over 89% in 2022. Even so, it’s tough to pick up companies like Hess (which seem like speculative plays to most income-seekers) while avoiding traps like Meta.

It’s much easier, however, to buy a closed-end fund (CEF) that gets you many different firms. We can spread our assets further by zeroing in on three CEFs with three focuses: one on the oversold tech sector; one on the oversold pharma, insurance and healthcare sectors; and one on the oversold real estate sector. (You can see the performance of these sectors through the moves of their benchmark ETFs in the chart below.)

3 Oversold Sectors We’ll Mine for 9.7%+ Dividends 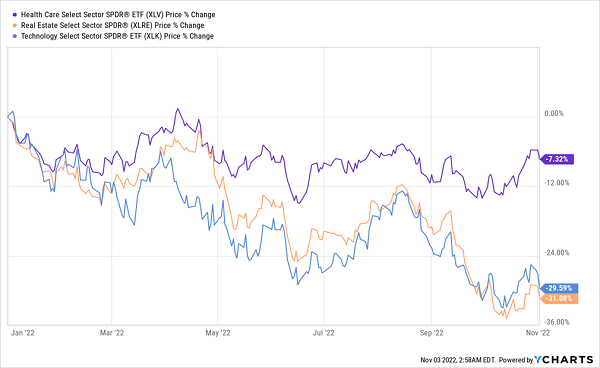 CEFs work for us now because they’re actively managed by pros from some of the world’s most successful investment firms, so we can “farm out” the job of separating winners from losers. But the biggest draw with CEFs is their dividends, which are particularly high these days. As I mentioned above, the three we’ll discuss below boast yields from 9.7% to 12.5%.

Plus, their discounts to net asset value (NAV) are also in double digits. That essentially gives us a double discount: one on the fund itself and one on the stocks it holds, due to the selloff.

Let’s start with one of my personal favorites, the widely misunderstood Neuberger Berman Next Generation Connectivity Fund (NBXG), whose discount has swollen from 7.1% to 17% in 2022. That’s larger than 95.7% of the CEFs tracked by my CEF Insider service.

This also means you’re getting NBXG’s portfolio of cornerstone tech firms, like Palo Alto Networks (PANW), Monolithic Power Systems (MPWR) and Alphabet (GOOGL) for 17% less than if you’d bought these stocks individually. And since NBXG pays a 12.5% dividend, future profits will be transformed into income by the fund itself, without shareholders having to sell.

Post-Fed CEF Buy No. 2: 11.3% Dividends From an Always-in-Demand Sector

The BlackRock Health Sciences Trust II (BMEZ) has top-flight management in spades, due to the fact that its run by the largest asset management firm in the world: BlackRock, a global company with over $10 trillion in assets.

We’re also getting critical suppliers to the healthcare industry, like Quest Diagnostics (DGZ), AbbVie (ABBV), UnitedHealth Group (UNH) and more. Also, with an 11.3% dividend yield, every $10K put into BMEZ gets us $94 a month, which is a lot more than the $14 per month this investment would get with a S&P 500 index fund! A 16% discount (essentially giving us these firms for 84 cents on the dollar) adds even more appeal.

Post-Fed CEF Buy No. 3: A 9.7% Dividend From a Savvy Real Estate Specialist

Let’s round off our “mini-portfolio” with the Cohen & Steers Real Estate Opportunities Income Fund (RLTY) for 9.7% dividends at a staggering 15% discount. This discount is way overdone, since Cohen & Steers is renowned as one of the best real estate advisors in the business.

RLTY, for its part, is one of the most diversified plays you can make, with a portfolio of 162 real estate firms that each have thousands of properties apiece, including companies that control critical infrastructure, like cell-tower landlord American Tower (AMT); highly sought-after warehouses, such as those owned by industrial REIT Prologis (PLD); and rental property through Invitation Homes (INVH).

The Final Word: CEFs Have Always Been Long-Run Winners

Finally, bear in mind that every time over the last 10 years that we’ve seen CEFs discounted this heavily in a selloff, they’ve recovered to give investors big upside on top of outsized income streams. Contrarians who take the long view will benefit—especially if they target CEFs in the most discounted sectors, like the three above.

Here’s something else most people don’t realize: of the roughly 500 CEFs out there, more than half pay dividends every single month. That’s a big plus for us, as those payouts come in right alongside our bills. And monthly payouts let us reinvest our dividends faster, too!

My team and I have combed through all of the monthly paying CEFs to come up with our 5 top picks now. They yield 8.9% today, and they’re trading at ridiculous discounts I expect to vanish as we move into 2023. Click here to learn all about these 5 dynamic monthly paying CEFs—I’ll also share their names, tickers, current yields and more in an exclusive Special Report.