This 10% Yield Is Circling the Drain: Sell Now

At the start of June, I warned investors to avoid a certain fund like the plague.

Of course, anyone long the fund was turning a blind eye to the very real dangers lurking behind it. Today I want to talk about the mistake they made and how we can avoid repeating this blunder in the future.

First, let me tell you what fund I’m talking about. It’s run by one of the greatest investment companies in the world, with one of the best track records out there; in fact, it’s one of the few companies that has consistently beaten the market for over a decade across most of its investments.

That company is PIMCO, and the fund that’s done so poorly lately is the PIMCO Global StocksPlus Fund (PGP). 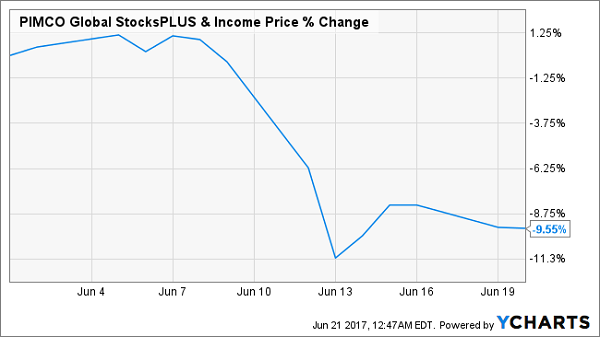 If you regularly read my columns, you may already know I’m no fan of PGP.

In June, I warned that the fund had an extreme and unsustainable valuation. And I’m not the only one who sounded the alarm. My colleague at Contrarian Outlook, Brett Owens, also wrote about PGP’s crazy nosebleed price back in April. The warning signs were there for anyone to see before buying into this sudden bearish turn.

Sadly, the market didn’t realize its mistake in an orderly fashion; like most stock-based funds, PGP takes the escalator up and the elevator down.

So why exactly did investors suddenly sell $11.3 million worth of PGP shares in less than a week?

To answer that question, let’s go back to the three basic rules of closed-end fund (CEF) investing.

Rule #1: Past Performance Indicates Nothing

If you like gambling, the stock market is not for you. Because a lot of investors will see momentum build in a stock and speculate that this momentum will continue. This kind of blind bet rarely works, and often ends in tears.

With PGP, the tears came swiftly in the middle of June, when the fund’s unsustainable breakneck jump in price came to a screeching halt. While the S&P 500, as we see from the SPDR S&P 500 ETF (SPY), rose steadily throughout the year, the PIMCO fund absolutely skyrocketed, rising over 40% at its height: 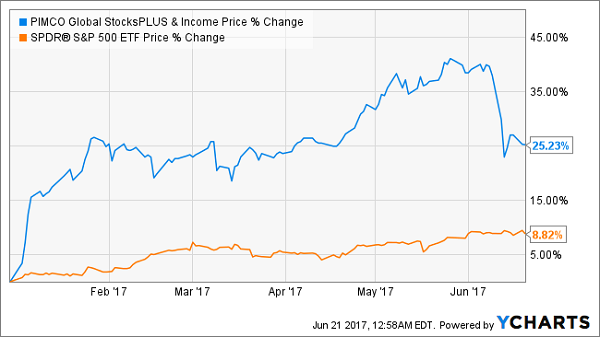 This sudden and sharp growth was unsustainable, however, because the value of PGP’s assets only went up about 11% over the same time period.

The Other Shoe Drops 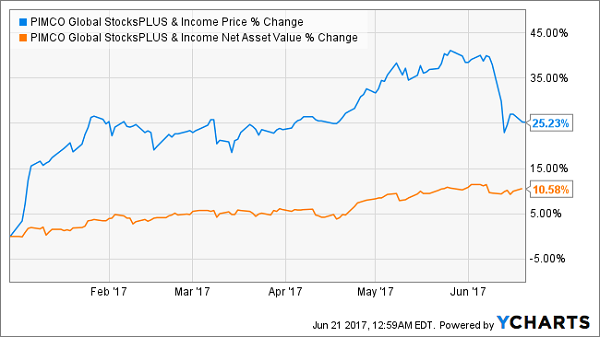 In the middle of June, enough investors realized that PGP had gotten way ahead of itself and it was time to get out. The selloff happened suddenly and randomly.

That’s the danger in betting on a fund just because it recently went up: it may not keep going up, especially if its price gains have nothing to do with the actual value of the fund’s assets.

CEF investors are addicted to income. The average closed-end fund pays over 6% in dividends, with many good funds paying 7% or more. With such high yields, it’s no surprise that income-hungry investors flock to the asset class.

There’s just one problem: CEFs cut dividends. A lot. The best ones adjust distributions according to what is sustainable, and they do this frequently enough that a change to the dividend doesn’t cut the fund’s market price by much. While PIMCO is good at managing some of its funds’ dividends, it’s awful with PGP.

As of the end of May, PGP was underearning its dividend by $0.05 per share. That’s not good, but it isn’t the biggest problem in the world. The best funds can make up for that with some savvy investing. And PIMCO might be able to make up for it, too—in the short run. Longer term, however, PGP’s dividend is absolutely unsustainable.

Because right now, PIMCO needs to pay 15.7% of PGP’s net asset value (NAV) in dividends per year. So to keep the fund from getting smaller, it needs to earn a 15.7% return in the market, even while it’s seeing $18.8 million in cash leave the fund every month in the form of dividend payments.

And PGP has been getting smaller for years: 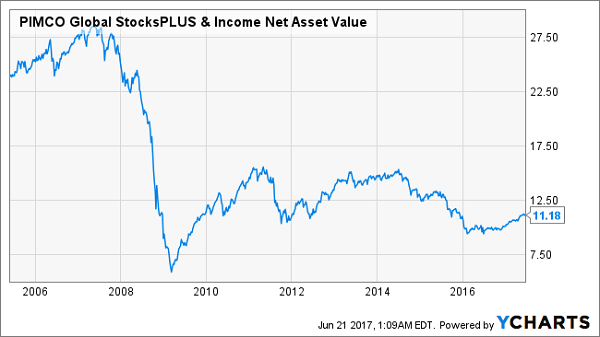 This is the kind of death spiral that sees many closed-end funds go out of business. When the fund is trading at a discount to its NAV, that’s not a bad thing—going out of business means a liquidation event that forces investors to exchange their shares for cash. If the shares are trading for less than their NAV, that translates into an instant big return.

But in PGP’s case, such an event would be a disaster.

That’s because the fund is currently trading at a whopping 58% premium to its NAV. If PIMCO decided to shut PGP down tomorrow, investors would lose $0.58 for every dollar they have in PGP.

That kind of liquidation isn’t the only risk PGP investors face. The market can still fret about the fund’s overvaluation and trigger a massive decline, just like we saw in June. Or the market itself could go through a correction or even a full-on bearish selloff. When that happens, PGP always sells off more aggressively, like it did in 2008-09: 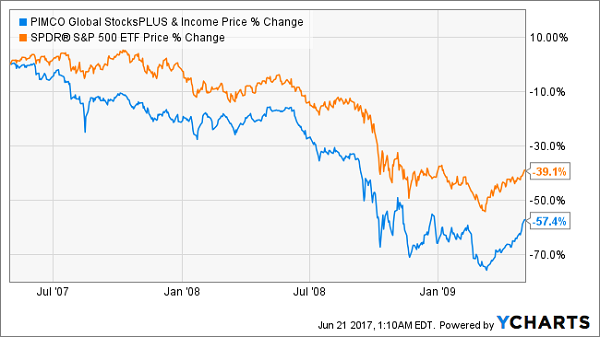 With so many risks at work, there’s just no reason to buy PGP.

Let’s start with the discount: unlike PGP, these 4 under-the-radar funds trade at massive (and unusual) markdowns to NAV. When they snap back to “normal,” their share prices will catapult higher too!

We’re “pre-loaded” for easy 20% price gains here, and when you tack on the 7.5% average CASH dividends these funds throw off, we’re talking about a 28% total return in the next 12 months. And remember, that’s just the average—some of these 4 superstar funds are primed to soar even higher!

I’ve put all the details—fund names, tickers, buy prices and more—in a new FREE report called “4 Great CEFs to Buy Now: 7.5% Yields and 20% Upside Ahead.” Click here and I’ll reveal my entire CEF investing strategy and give you your own copy of this breakthrough report right now!