These Reliable Monthly Dividend Payers Have Never Been Cheaper

A trio of reliable monthly dividend payers has been swept up in the pandemic panic. They could be the dirt-cheap buys that have dividend investors kicking themselves this time next year for not “backing up the truck” and buying every monthly paying share in sight.

These closed-end funds (CEFs) as a whole are far smaller than their mutual and exchange-traded brethren, and they’re about as sexy as a doorstop, so they go completely ignored by traditional financial media. But a couple dozen of these have exhibited some downright admirable performance while the rest of the market is tanking around them.

Better still? CEFs are, as a general rule, income monsters, and thus they’re among my favorite contrarian income plays for retirement accounts.

And most importantly, these three in particular are bargains. Most stocks have been blasted because their business prospects suddenly look worse. But these funds have suffered modest declines while their net asset value (NAV) has remained steady or even grown. As a result, each CEF is trading at least twice as cheap as its historical discount to NAV.

BlackRock Core Bond (BHK) is exactly what it sounds like: a fund that can provide investors with their only source of fixed-income exposure, if they wished. This wide basket of 1,390 bonds covers the gamut, from Treasuries and other U.S. agency securities to corporate bonds and mortgage-backed securities.

Importantly, at least 75% of BHK’s assets need to be used on investment-grade debt (at the time the fund purchased the bond), and that’s right where it sits at the moment. The largest slug of assets, 31.4%, are in the top-rated tier of debt (AAA). High-yield corporate junk is about 11% of the portfolio, so that has kept BHK mostly insulated from that implosion.

Despite the relative stability of BlackRock Core Bond’s assets, panicky investors have lost their nerve of late and driven the CEF’s units far more than they deserved. The upshot for new investors? You can buy those assets for 88 cents on the dollar—a nearly 12% discount that’s almost double BHK’s five-year average discount to NAV of 7.6%.

On top of that, you’re getting a 6%-plus yield via distributions that are delivered each and every month. 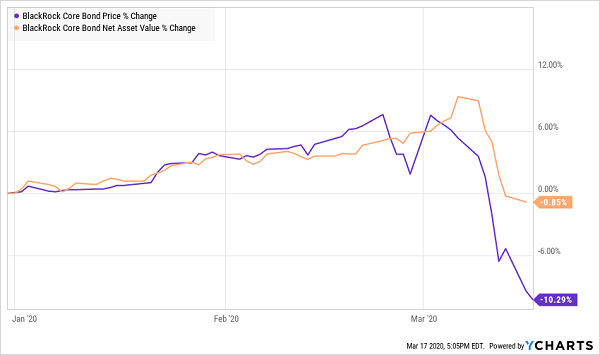 Municipal bonds have held up awfully well so far, and in fact, many of the best-performing CEFs this year are of the muni-bond sort.

Eaton Vance Municipal Income Trust (EVN) is among the funds in this tax-free crowd. Its 351 holdings are spread among 30 states, Puerto Rico and the District of Columbia, though they’re hardly spread out evenly. New Jersey, New York and Massachusetts munis alone make up nearly a third of assets, and more than three-quarters of all assets are held in the top nine states and Puerto Rico.

Municipal bonds are a “sneaky” good income play most times. While the occasional default will send the financial world breathless, muni bonds are much safer than these cautionary tales would indicate, and 80% of EVN’s portfolio is at least investment-grade, including 42% in the second-highest debt tier of AA.

EVN’s assets have been just a touch weaker than BHK’s, but the story here is the same: an overdone panic. As a result, Eaton Vance Municipal Income Trust trades at a mouth-watering 20% discount. That’s more than triple its five-year average discount of 4.3%. 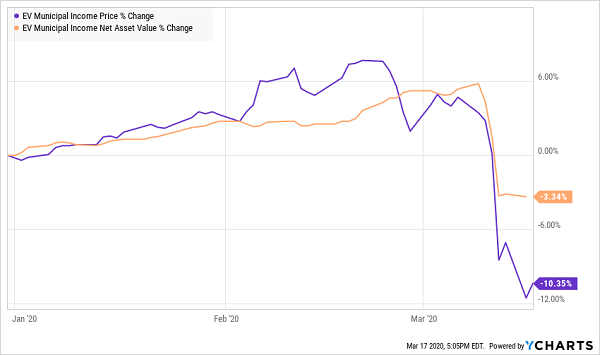 Every now and again, I field the question: “Why would anyone buy a taxable municipal bond? What’s the point?” And I’ll answer with a question:

“What’s the point of holding tax-free bonds in a tax-advantaged account?”

Tax exemption only matters if you can put it to use. If you can’t, then you’re simply eating lower yields for no good reason. Taxable muni bonds, on the other hand, sport higher yields than traditional munis but with relatively similar credit strength.

BlackRock Taxable Municipal Bond Trust (BBN) is a collection of just more than 150 of these “black sheep” munis, tied to things such as utilities, transportation projects and health measures. And more than 90% of the fund is allocated to investment-grade bonds, which is an awfully safe way to get over a 6% yield, paid monthly.

What Is Wall Street Looking At? 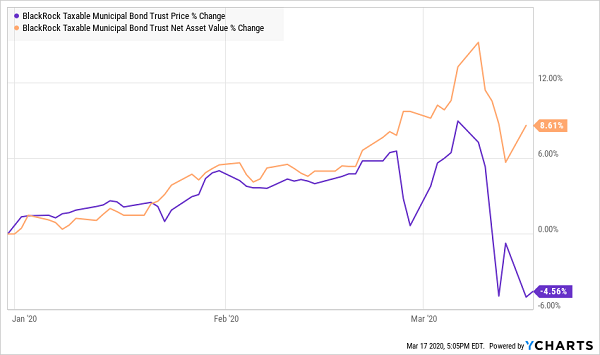 The result is what, at least at the moment, looks like a steal—a discount of nearly 13% for a fund that typically only trades at 4% below NAV.

That’s right: BBN’s net assets have actually gone up nearly 9% in value, but the fund’s price has dipped by more than 4%.

How to Collect $3,000 in Dividends Each and Every Month

The real question with these funds is just how much upside is left given that interest rates have been slashed into the ground. Their deep value prices will help provide modest price returns, but then what?

I have even better income ideas outlined in my “Monthly Dividend Superstars” report. These little-known contrarian plays tick off every checkbox in the retirement wish list, including …

This is the path less traveled.

Most finance-TV pundits will tell you to sink your hard-earned retirement money into “can’t-miss” blue chips like the Dividend Aristocrats. They’ve grown their dividends for decades, and probably will for decades more.

Ignore that nonsense. Those same Dividend Aristocrats only yield a little more than 2% on average, and the most established Aristocrats have slowed their dividend growth to a sloth’s pace. Worse, some of these “Aristocrats” might be kicked out of the club by this time next year, their artificially propped-up payouts exposed by a lethal dose of reality. If you retire with these kinds of stocks, your income stream will dry up so quickly that, within just a few years, you’ll be forced to hack away at your savings to pay your monthly bills.

Don’t take that gamble. Pay your monthly bills with outsize monthly dividend checks, and use the leftover cash to take a couple trips, build that backyard pool or spoil your grandkids rotten.

Let me show you the way to a set-it-and-forget-it 8% portfolio. Click here to get a FREE copy of my exclusive “Monthly Dividend Superstars” report, complete with tickers, buy prices, yields and analysis … as well as a other bonuses, including 12 popular dividend stocks that you need to SELL NOW before they ruin retirement.