My CEF Market Forecast, and the 10% Dividends You Should Be Watching Now

To be sure, no one expected stocks to notch big double-digit losses in just two weeks, and while I don’t know when a rebound will happen (anyone who claims they do is lying), the economic numbers do carry a ray of light.

So let’s dive into them, and talk a little bit about the 18 funds in our CEF Insider portfolio, too.

Of Lizards and Dividends

First, there’s one thing we must not do at a time like this: follow our “lizard brain”: the primeval part of our thought process that tells us to flee when danger rears up, to keep our precious capital safe.

The problem, of course, is knowing when to get back in after you sell. Do you wait for the number of new coronavirus cases to peak? So is everyone else. By then, most of the rebound will be behind us.

This conundrum, in one form or another, has plagued investors in meltdown after meltdown. Study after study shows that this is where most bears lose the script: they sell at the worst time, then wait too long to get back in, leaving the biggest gains (and highest dividend yields) for us savvy second-level investors to grab.

You can see this fatal flaw in a study by Dalbar Inc.: according to the market-research firm, the S&P 500 posted an average annualized return of 9.85% a year in the 20 years ending December 31, 2015. But the average investor got only a little over half that, 5.19%, mainly because their lizard brain got the best of them when trouble hit.

You likely know someone who did this during the 2008/2009 financial crisis. Odds are, they still haven’t made up those losses, despite the fact that the S&P 500 has returned more than 300% since it bottomed in March 2009.

Our CEF Insider Payouts Are Safe

We’re not going to make that mistake, especially when there are so many cheap high-dividend options available in our CEF Insider portfolio, which yields upwards of 10% as I write this. These dividends are safe, so you can enjoy them while we wait for the inevitable rebound to come.

Meantime, you can rest assured that I’m keeping the portfolio under constant surveillance, and will let you know the moment we need to make any changes.

In Good News: A Recession Is Already Priced In

It’s no surprise, after the wave of shutdowns we’ve seen across the economy, that many economists are now predicting a recession. I, too, can see GDP growth going negative for a couple of quarters in the US.

But that, again, does not mean it’s time to sell stocks. Let’s dive into the history—and the current economic numbers—so I can show you why I feel that way.

The most important thing to keep in mind is that this recession will be nothing like 2007-09. That collapse caused consumer spending to freeze up and asset prices to crash because of fundamental flaws in the financial system—flaws that have since been mostly addressed.

This current crisis is an unexpected shock to the market that came from the outside. That’s structurally different from the shock of 2007-09, which was more like a house of cards suddenly falling apart.

That’s why I expect the 2020 recession to be more like the 1990 recession. If you are too young to remember, that recession was an eight-month slowdown resulting from oil doubling in price as a result of Iraq’s invasion of Kuwait. This was another unexpected shock from an external source, and it caused US stocks to fall 19.9% during the period. But by the time the economic slowdown had ended, stocks had fully recovered.

Stocks Fall on a Similar “Outside” Shock—Then Bounce Back 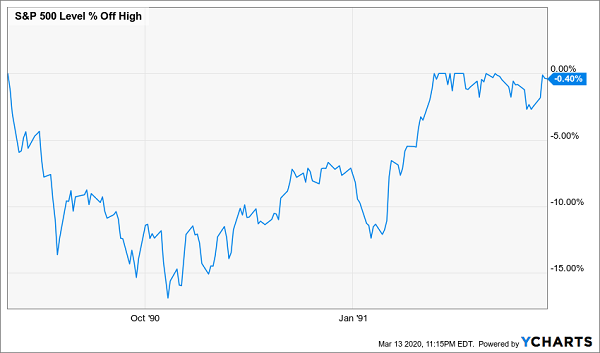 Fast-forward to today: if a recession does come, markets won’t be shocked. This means there is upside to buying stocks—or better yet, closed-end funds (CEFs) that invest in stocks—now, especially on the possibility that this recession doesn’t actually happen, or is mild and short-lived.

Here’s something else to consider: as more countries boost their ability to test for COVID-19, the virus’s current death rate will likely come down as more mild or asymptomatic cases are uncovered. That could go a long way toward easing people’s fear, meaning consumer activity could start to resume sooner rather than later, softening or pre-empting the recession everyone expects.

The Oil Crash: America Will Benefit

Now let’s talk about the other side of the meltdown story: oil, which has done the following since the Saudi Arabia-Russia price war broke out: 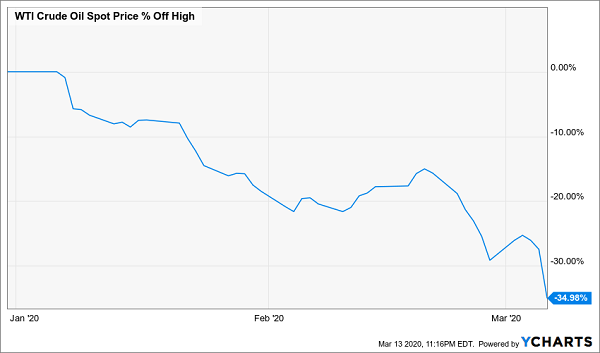 The price war terrified markets, arguably more than the coronavirus did. But is there reason to sell US stocks because of oil’s crash?

Obviously, energy stocks should fall due to this trend, and dividend traps like master limited partnerships (MLPs) remain an unsafe place to keep your cash. But should other US stocks fall because one of their biggest costs—energy—has suddenly gotten cheaper?

Energy Deserves Its Selloff—the Others Don’t 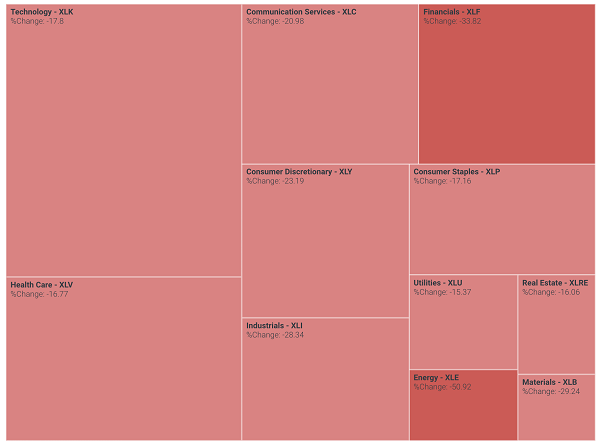 Energy as a portion of the S&P 500 has been falling for years, and is now just 9% of the index. But market panic caused the other 91% to sell off in sympathy, even though what’s bad for energy is great for sectors like utilities (which buy energy) and consumer-discretionary firms (which stand to book extra sales as cheaper gas leaves more money in consumers’ pockets).

That makes the Utilities Select Sector (XLU) and Consumer Discretionary Select Sector (XLY) ETFs decent buys, but it’s even better to lock in a higher dividend to keep us flush in income through these turbulent times, and we can do that through high-yielding CEFs in those sectors. A good example is the Cohen & Steers Infrastructure Fund (UTF), which yields 11.2% as I write this and trades at a 9.6% discount to net asset value (NAV).

We’ve seen this before. 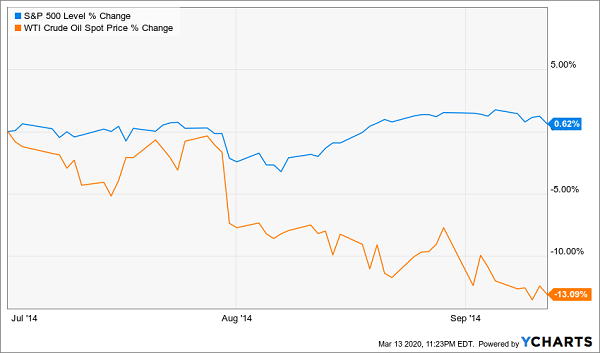 When oil crashed in 2014, stocks immediately fell as the market panicked, and then everyone remembered that cheap oil is actually great for the economy. Stocks are up 37.8% since that happened, even after the recent crash.

I’ve saved the best for last: the Federal Reserve has swung into action.

Following the recent bear market, the Fed announced it will buy $1.5 trillion worth of Treasuries, effective immediately. This is very fast action; in the Great Recession, the Fed waited months before it began its quantitative easing (QE) programs, which is why the bear market then lasted for months. But we’ve learned that fast QE saves economies, so there’s no political opposition, and the Fed can act fast.

If you doubt QE is good for stocks, just turn to 2013. Back then, the Fed spent less than $1 trillion on bonds, and this happened to the markets: 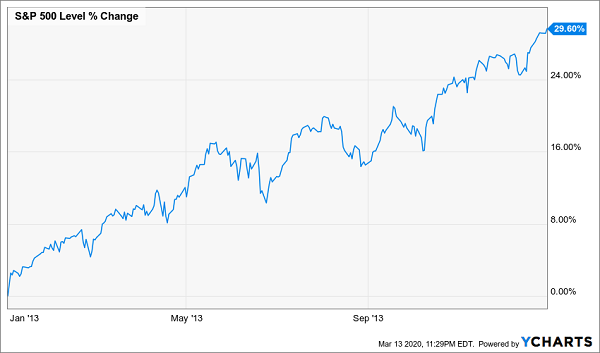 While we can’t expect 2020 to be a year where stocks go up 30%, it is very possible that stocks could go up 30% from their bottom in much less time than most people think. Which means investors we now have a great buying opportunity, but the window is closing fast.

In this pullback—or any pullback— one of the best things you can do is to bulk up your income stream by adding high-yield CEFs to your portfolio, especially one of the 4 buys I’ve got for you here, which I’ve personally safety-checked and hand-picked.

These unique funds are custom-built for a crash because they give you two lines of defense other investments simply can’t: high dividends and big discounts to their “true” value!

Let’s take that second point first: unlike any other fund, a CEF can trade at a discount to the value of the investments in its portfolio. We don’t have to get too far into the weeds here, but this is known as a “discount to NAV” in CEF-speak, and it gives us an extra shock absorber in a crash like this.

These discounts are easy to spot on any CEF screener worth its salt, which makes our strategy  pretty simple: buy a CEF trading at a massive discount to NAV, then BUY. Because if a CEF is already dirt cheap, it’s hard for it to get a lot cheaper—and it’ll likely be among the first to jump when the dust settles!

That’s part one of our CEF safety plan. Here’s part 2: add a huge discount to your dividend, like you’d do when you buy the 10.4% payer among the four picks I’ll show you right here.

A rock-solid dividend like that gives you the ultimate margin of safety, giving you back 10% of your upfront investment in cash every single month. That slowly reduces the volatility of your portfolio over time. And after 10 years, you’ll have completely recouped your initial investment in dividends alone. Everything else is gravy!

I can’t wait to share these 4 cash-rich CEF picks with you. Simply click right here and I’ll give you full details on each of them: names, tickers and my full analysis of each one (including a full breakdown of their dividend histories and safety). Don’t miss out.