These 9%+ Yields Are About to Be Slashed (Again): Sell Now

Stocks are going gangbusters, but some closed-end funds—including three I’m going to tell you about below—have gotten way ahead of the market.

But don’t let that turn you off the whole CEF space. Truth is, there’s still a treasure trove of hidden gems here, including some that crush the S&P 500 while paying incredible 7%+ dividends. It’s just that investors sometimes go overboard and bid certain CEFs above their actual value.

How is this possible?

Because unlike ETFs and mutual funds, which always trade at or near their net asset value (NAV, or what a fund’s underlying assets are worth), CEFs often trade at big premiums or discounts to NAV. When a fund trades at a big premium, it’s running a big risk of a quick, heart-stopping fall.

The most extreme example of an unsustainable gap between market value and NAV right now is the PIMCO Global StocksPLUS & Income Fund (PGP), which is up a whopping 41% year to date. 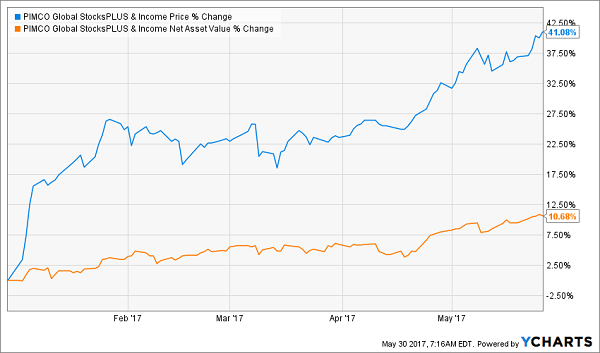 Because of that big difference between the fund’s NAV and its market price, investors who buy now are paying a 77.4% premium to NAV. In other words, for every $1 worth of assets in this fund you’ll have to cough up over $1.77 in cash!

Worse, that huge run-up in PGP’s stock price has slashed the fund’s dividend yield (because you calculate yield by dividing the annual payout into the current share price).

While PGP was paying a 14% yield at the start of the year, it’s now paying about 9%. And that dividend is far from safe: management cut the payout by 20% in October 2016, for the first time in the fund’s history.

And make no mistake: another cut is coming soon.

Because as I write, PGP is paying out 16% of its NAV as dividends annually. So just to keep its underlying assets from shrinking and cover its 2.75% expense ratio, management will need to earn a near 19% return in the market. History isn’t on PGP’s side here: the fund’s NAV is actually down over 50% since its inception more than a decade ago: 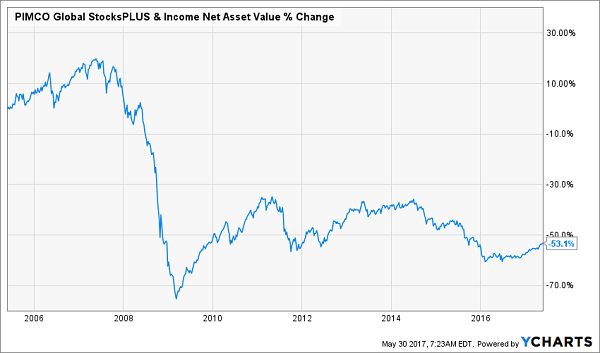 The bottom line: With its withering dividend yield and NAV, this fund just isn’t worth buying—especially at these levels.

Dangerous CEF Play No. 2: A Classic Case of Blind Buying

Energy is down all over the place while OPEC struggles (in vain) to get oil prices to soar.

But neither of those things mean energy is a bad bet right now. There are, in fact, many great undervalued oil and gas stocks out there. But this environment does mean we need to be extra selective when choosing an energy fund to put our hard-earned dollars in.

That’s why I don’t understand why investors are driving up the price of Gamco Global Gold Natural Resources & Income (GGN), a fund whose NAV is down over 2% for the year while its market price has shot up nearly 8%: 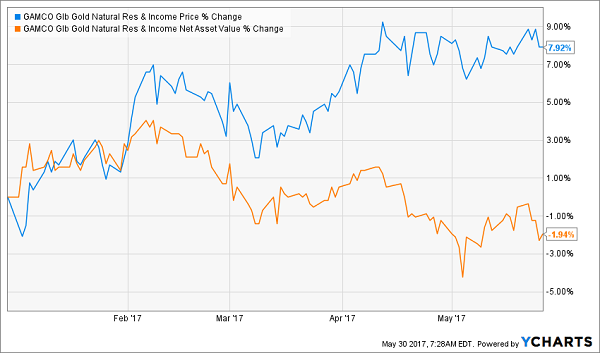 Note how, earlier in the year, the fund’s market price and NAV were trending pretty close to each other? Then in February, they suddenly split, and GGN’s market price has far exceeded its NAV ever since.

These short-term divergences in market price and NAV are common in CEFs, and it’s usually a bad idea to be on the wrong side of this trend; if you buy into a CEF whose market price has far exceeded its NAV return over a short time period, you’re likely to get clobbered when the gap reverts to normal.

Granted, GGN’s premium to NAV is much smaller than PGP’s, at only 2.7%, but there are many other energy funds that have actual discounts (including the 27 I told you about on May 18), and some have even seen their NAV grow in 2017. Those are better options for anyone looking to jump into energy right now.

Dangerous CEF Play No. 3: A Yield Trap About to Spring

There is one CEF whose NAV has grown by leaps and bounds beyond its market price, and it’s a surprising one: the PIMCO High Income Fund (PHK), which has gained a lot of notoriety over the years thanks to its very high dividend yield (currently 11%). After the 2007–09 financial crisis, PHK not only kept its dividends steady but saw capital gains that drove the fund’s market-price premium to stratospheric levels.

This made contrarians critical of the fund, but investors collecting those payouts were laughing all the way to the bank. That is, until 2015, when the fund slashed its dividend for the first time. Then it cut dividends again at the start of this year.

That’s partly why the fund’s market performance has been abysmal; PHK’s price is down nearly 4% in 2017, although its NAV is up nearly 6% over the same time period: 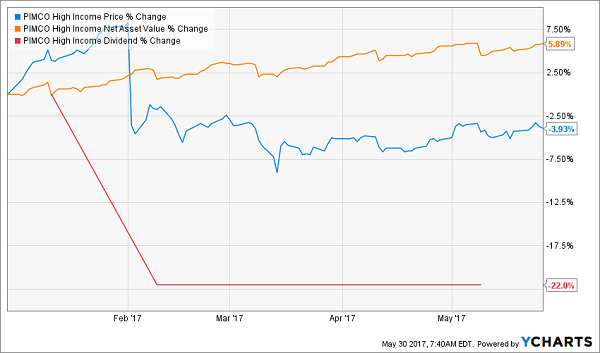 That’s also helped the fund’s premium to NAV, currently at 29%, fall well below the 10-year average premium of 37.3%. That sounds like great news and might even make you consider buying PHK now that its distributions are cut (thus theoretically more sustainable) and the discount is below its average.

But as my colleague Brett Owens recently wrote, it’s relative discounts that matter in situations like this, and this is where we need to go beyond the raw data and do some second-level thinking. Because while it’s true that PHK’s premium is unusually low when looking at the post-crisis era, it’s markedly higher than before the meltdown, when the fund traded at pretty narrow premiums (and even discounts) to NAV: 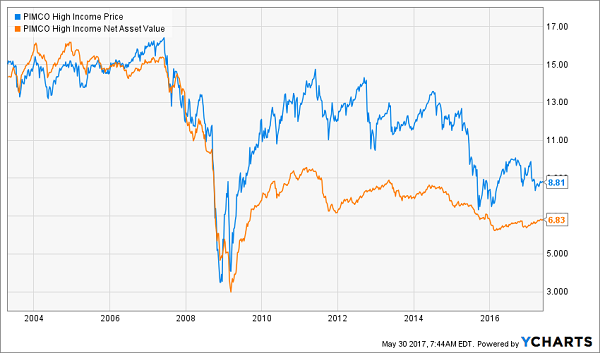 There is very good reason to think PHK will revert back to its pre-crisis trend of trading close to NAV. For one, we’re beginning an era of rising interest rates, which is exactly what we saw in 2004–06, when PHK was trading close to its NAV.

Also, the recent big premium PHK earned was largely a result of market expectations that the fund would not cut its dividend. Since PHK has cut its dividend (twice), it seems pretty clear that it can—and will—cut again, especially since the fund is paying out an unsustainable 14.2% of its total assets as distributions.

All of this means that PHK’s 29% premium is under threat, and anyone buying now is setting themselves up for losses in the near term—potentially big ones.

Remember when I told you earlier that there’s still a treasure trove of bargains waiting for us in the CEF space?

Well, there is. And now I’m ready to show you the 4 very best ones. Together, these dynamic cash machines throw off a 7.5% yield you can anchor your nest egg on!

Oh, and unlike the 3 overhyped laggards above, they trade at big discounts to their historic NAVs, so we can count on nice double-digit upside here too!

One of my favorites is run by a management team that’s so sharp they navigated the 2008–09 mortgage meltdown by investing in … real estate.

You read that right.

Thanks to a few canny moves, the whip-smart crew running this fund brought it back into the black years faster than the market as a whole—and today it throws off one of the safest yields in the CEF space: a gaudy 7.8%!

In fact, if you’d bought this one at inception, you’d be sitting on a market-crushing 790% total return right now. And thanks to this fund’s massive dividend payouts, most of that return would be in cash. 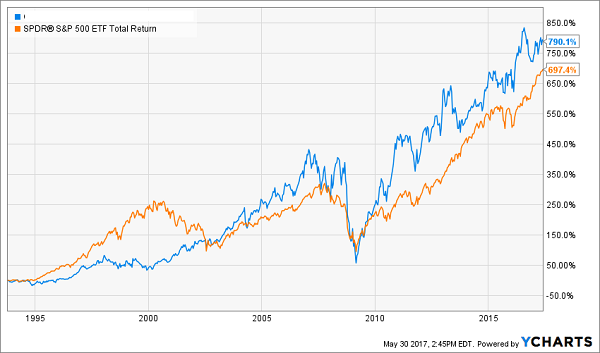 Here’s where things get kind of, well, unusual.

Because despite that incredible performance, this unsung fund still trades at a ridiculous discount to NAV, nicely setting us up for even more upside (and limited downside) in the months ahead.

The whole profitable story is waiting for you in a new FREE report I’ve just published called “4 Great CEFs to Buy Now: 7.5% Yields and 20% Upside Ahead.”

Don’t miss your shot at these life-changing returns. Go right here to get your own copy of this unique report and start profiting today.