3 Dividend Aristocrats That Deserve the Title … and 2 Pretenders

Investors looking for the surest path to dividend growth typically look to the S&P 500 Dividend Aristocrats. These are the supposedly “elite” dividend stocks within the S&P 500 that have not just paid but hiked their regular distributions at least once a year for a minimum of 25 consecutive years.

It’s not a crowded clubhouse, with just 52 members at the moment, but don’t be fooled – just like most groups of stocks, there are winners and losers, like the group of five Dividend Aristocrats I’ll be breaking down for you today.

You’d think that decades of dividend growth would be a sure indication of stock quality, and thus outperformance. And if you look at the performance of the S&P 500 Dividend Aristocrats Index since inception in May 2005, you’d be right – from inception through 2016, it outperformed by about 200% to 125%. Not bad at all.

However, over the past three years, the ProShares S&P 500 Dividend Aristocrats ETF (NOBL) is barely outdoing the S&P 500, and is actually underperforming some broad dividend funds such as the iShares Select Dividend ETF (DVY). 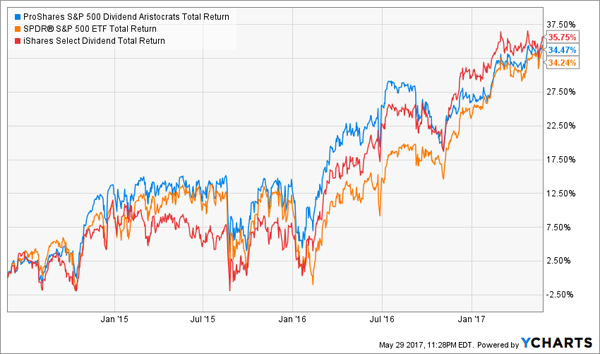 It could just be a period of relative weakness for the NOBL. But it’s also the same thing that plagues many other simple index funds – the losers hold back the winners.

I like a few Dividend Aristocrats because, after all, dividend growth is one of the most important elements of any retirement portfolio. But a few Aristocrats give the index a bad name, and should be explicitly avoided.

Today, we’ll discuss three Dividend Aristocrats that are the real deal, and two that are just pretenders to the throne.

How many times have you heard someone say that Johnson & Johnson (JNJ) is dead money? Because it happens all the time.

Sometimes it’s amid certain disaster, such as in 1982 after several people died from taking potassium cyanide-laced Tylenol, or even last year as the company was forced to pay out nearly $200 million in lawsuits over deaths related to its baby powder and talc products.

And yet the 131-year-old company’s stock sits near all-time highs.

JNJ is consistently buoyed by its large consumer products brands such as Band-Aid, Neutrogena and Acuvue, as well as its deep roster of pharmaceuticals products such as blood thinner Xarelto, blood cancer drug Imbruvica and multiple myeloma treatment Darzalex.

Johnson & Johnson just hiked its dividend another 5%, yet its payout is less than half next year’s projected earnings. Those profit forecasts, by the way, are for an 8% jump to $7.67 in 2018 – on decent 5% top-line growth, no less. If you are going to buy JNJ, I would merely recommend doing so on a dip to squeeze out a bit more yield. 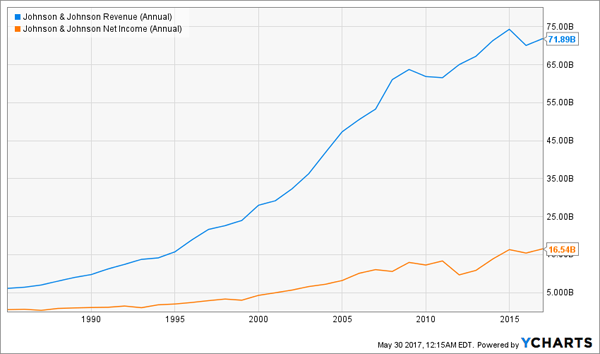 We’ve recently discussed how retail is taking it on the chin, and VF Corp (VFC) isn’t immune.

You probably don’t know the VF Corp name, but you surely know its various brands that include Timberland, The North Face, Lee and Wrangler jeans, Nautica, Jansport and Vans.

Now, VF Corp is trying to build out its direct-to-consumer business, which makes up just less than a third of the company’s revenues right now. That’s important to the company’s long-term survival … because the brick-and-mortar businesses that help peddle VF Corp’s wares, such as JCPenney (JCP), Macy’s (M) and Sears (SHLD) are getting crushed.

As a result, VFC shares are off about 30% in the past couple years while the top and bottom lines have plateaued. This year, earnings and revenues alike are actually expected to contract. Despite this, VFC trades at 17 times earnings and at a PEG of 2 (where anything over 1 is considered overbought).

Retail is home to a few battered bargains, but VFC isn’t one of them. 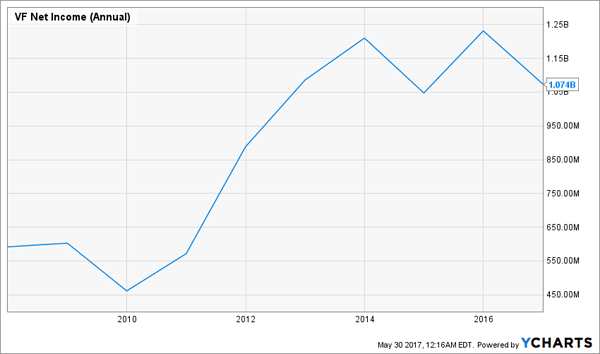 Slow and steady wins the race – as long-term Consolidated Edison (ED) investors are happy to attest.

When it comes to utility investing, you know what to expect – stable revenues, slow but consistent profit growth and dividends that steadily melt higher.

That’s what you get out of Consolidated Edison.

New York City continues to swell, reaching over 8.5 million people this year, and that means more clients for ConEd to serve. Profits hit new heights last year, which in turn has propelled the stock to fresh all-time highs. And analysts expect the utility to keep oozing out more growth this year and next.

Edison ticked the dividend another 3% higher earlier this year, and they can expect much of the same going forward. It’s not exciting, but that’s OK. We like our utilities to be boring. 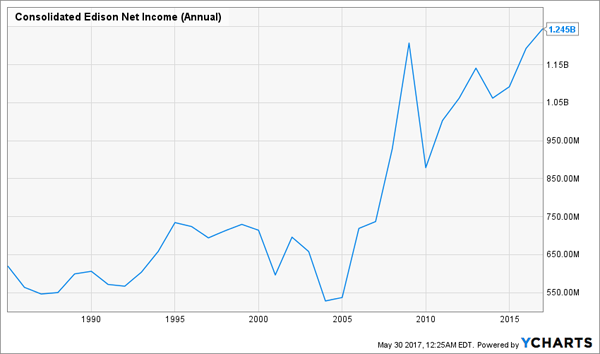 Coca-Cola (KO) was once a can’t-miss investment not just for its income and dividend hikes, but for its outsize growth. Coca-Cola and Diet Coke were a 1-2 punch that PepsiCo (PEP) couldn’t unseat, but the company kept expanding thanks to older acquisitions such as Minute Maid juices back in the ‘60s, as well as relatively newer offerings such as Dasani water and Powerade sports drinks.

Those days are long gone.

Coca-Cola recently suffered its eighth consecutive quarter of revenue declines as sugary drink consumption continues to circle the drain. The company’s woes have cost CEO Muhtar Kent his job, too, with prior COO James Quincey taking the reins beginning in May. KO also announced earlier this year that it would be laying off 1,200 people to save $800 million – in addition to the $3 billion in cost cuts the company was already seeking out.

The only thing growing at Coca-Cola is its dividend, and that’s by modest mid-single digits. KO isn’t dead by a long shot, but it won’t quench your thirst for total returns.

Coca-Cola (KO) Is Running Out of Caffeine 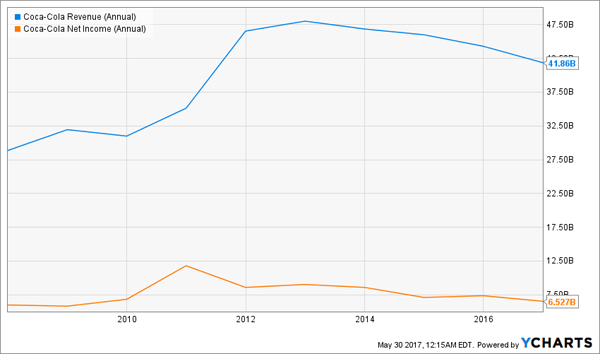 Last but certainly not least is AbbVie (ABBV), the pharmaceutical arm of the Abbott Laboratories (ABT) business that was spun off back in 2013.

AbbVie currently is home to a number of big-name drugs, such as arthritis/Crohn’s disease/psoriasis treatment Humira, testosterone replacement therapy treatment AndroGel and the aforementioned Imbruvica, which was formed in a partnership between JNJ and Pharmacyclics, which AbbVie bought up in 2015.

These drugs have powered a constant forward march on the top and bottom lines, and should really propel growth over the next couple years. Analysts are projecting high-single-digit sales growth this year and next, and overall profit expansion of 35% between now and the end of 2018.

But what really matters going forward for AbbVie is the pipeline, and investors should be assured on that front thanks to about a dozen indications that are currently in Phase 3 trials.

AbbVie’s last dividend hike was a 12% whopper that brought the payout to 64 cents per share, and investors can expect robust improvements going forward. This is an aristocrat that lives up to its name.

AbbVie’s (ABBV) Dividend Hit the Ground Running After the Split 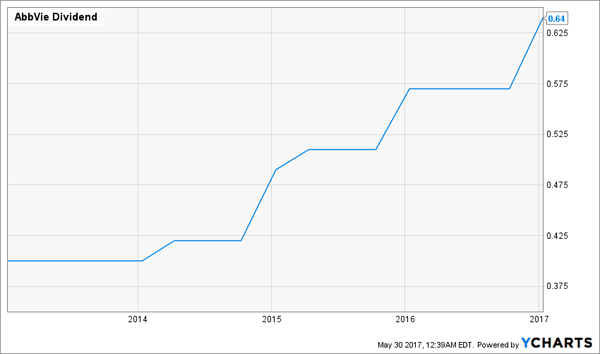 I love Dividend Aristocrats because they emphasize one of the most important aspects of the retirement investing game: dividend growth. But most of them lack another vital quality – big headline yield.

High yield, dividend growth and the potential for capital gains are the three pillars a retiree needs to lean on in retirement – and you’ll find the kinds of “triple threat” stocks that offer all three in my “No Withdrawal” retirement portfolio.

The path to this ultimate basket of retirement stocks wasn’t easy. My research led to dead end after dead end as I had to weed out yield traps and value traps alike. But the effort was worth it – after months delving into high-income assets like REITs, BDCs and other stocks, I’ve finally compiled a can’t-miss portfolio featuring:

It’s not greedy to go after all three of these qualities – in fact, it’s the only way to retire the way you’ve always planned. That’s because high yield, dividend growth and the potential for high capital gains will allow you to live off income … and actually grow your nest egg at the same time!

Many recommended blue-chip stocks only yield 3%, maybe 4% if you’re lucky. But do the math! Even if you’ve saved up $500,000 for retirement, 4% annually is just $20,000 a year. You and I both know that even with Social Security tucked in there, you won’t be able to afford the retirement you’ve been working toward.

The 8% average yield on my “No Withdrawal” portfolio – as well as the dividend growth that will yield to double-digit yields on cost over time – will ensure you have all the income you need to pay the bills (and then some). Meanwhile, the growth potential of these picks will help grow your nest egg in retirement, which is essential should you ever need to pay for a big one-time expense, whether it’s an emergency or just buying a vacation home.

This all-star portfolio features the very best of several high-income assets, from preferred stocks to REITs to closed-end funds and more. That means diversification and continued payouts regardless of how volatile or bearish the stock market becomes.

Let me show you the path to a no-worry retirement. Click here and I’ll provide you with THREE special reports that show you the path to building a “No Withdrawal” portfolio. You’ll get the names, tickers, buy prices and full analysis of their wealth-building potential – and it’s absolutely risk FREE!