Don’t listen to the permabears: they’re wrong when they tell you that the massive borrowing America is undertaking to fend off the coronavirus will cripple the economy for years to come.

You’ve no doubt heard this argument—it’s an old trope the talking heads roll out to scare investors into selling their stocks and stuffing cash in their mattresses. Imagine being frightened into selling in late March. You would have sold right at the bottom of this:

Giving in to Media Hype Here … 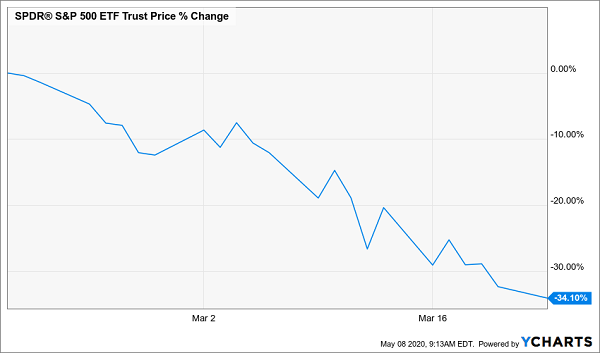 And if you were still sitting in cash today, grinding your teeth and wondering when you should get back in, you’d have already missed this:

… Locks in a Big Loss Here 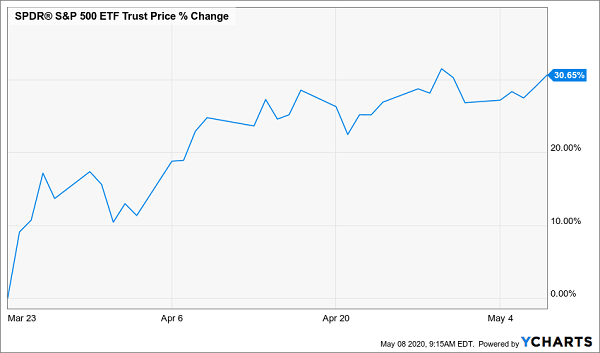 And this doesn’t include missed dividend payments—payments you’ll continue to miss the longer you sit on the sidelines! It’s a good illustration of the dangers of investing by soundbite.

The truth is, America is a rich country and can easily afford what it’s borrowing—and you should be buying, not selling, stocks now—especially if you do so through closed-end funds (CEFs), a group of 500 high-yielding investments that, on average, pay 7%+ yields today. More on these funds (and my four top CEF picks now) at the end of this article.

Let’s tackle the debt fear, starting with the amount of total public debt in the US. At over $23 trillion, it’s tripled in the last 20 years.

Government Runs Up the Credit Card …

Individual Americans don’t appear to be doing much better, with $4.2 trillion in debt for households across the country:

… And Households Do, Too

American companies are in the same boat. Corporate debt is at $10.1 trillion, and it, too, has been growing at a breakneck pace:

Companies Deep in Debt, Too

Put it all together and we’re looking at $114,259 of debt for every person in the US. So how can I say that America is a rich country?

Because no matter how large these debt numbers appear, they belie the fact that the US is wealthy and getting wealthier.

The Wealth of the Nation

First, it’s important to remember that talking about debt on its own is meaningless. For example, imagine if I told you I knew a 28-year old with $6 million in debt. Would you worry about this person’s financial stability? Would you be disturbed by their lack of financial responsibility?

Two details here change the story significantly: the assets of the debtholder and the interest rate of the debt being held. Interest rates on US debt have been going down for decades, which means America’s debt is getting less expensive to service.

Debt Gets Easier to Pay Off 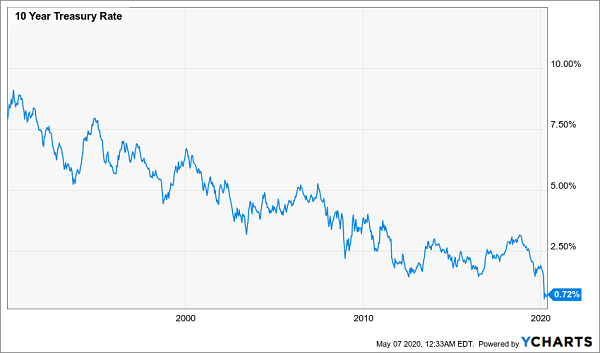 When interest rates fall, it makes sense to take on more debt because the cost of that debt has fallen, while the cost of other capital (such as stocks or holding cash) hasn’t. This is why the government can, and should, take out trillions of dollars in debt to fight the coronavirus crisis.

But the other part of the equation is more important: does America have enough wealth to cover its debts?

At $114,259 per person in debt, the answer is yes. The average net worth per American household is $692,100, according to the Federal Reserve’s Survey of Consumer Finances. And since they calculate a household as having 2.52 people, that means the average American has $274,642 in assets (only Switzerland is richer by this calculation). That’s enough to pay off all debt in the system twice.

So why don’t we? Again, it goes back to low interest rates: having a lot of the country’s wealth in debt helps the economic system do a lot of things that are good, such as spreading risk, and we can do so at the lowest cost in history.

The Income of the Nation

That brings us to another important point: debt servicing.

Let’s go back to Zuckerberg. If he had all of his wealth tied up in Facebook stock and no way to sell it to raise cash, even as a multibillionaire he could find himself unable to pay his debts. Is the US, for all its wealth, in a position where it cannot pay its debts?

Again, the answer appears to be no, even in the pandemic.

To explain this, let’s go over some quick math. US households earn about $18 trillion per year (or did before the crisis began). If we compare how much households pay in interest on their debts—credit cards, mortgages, personal loans and student loans, for example—and compare that to their incomes, we see that 19.5% of US household income goes to pay off debt. For public debt, the number is much lower.

With just 22.2% of pre-tax income going to paying off debts per household in America, on average, debt is a much smaller burden than a middle-class family’s mortgage would be by itself. In fact, we could be spending more on debt, both public and private, without causing a problem.

Urgent note from the publisher

Earlier in this article, Michael mentioned closed-end funds (CEFs). These investments are perfect for volatile markets because they sport huge yields—7% on average—and many CEFs pay you monthly.

Better still, it takes CEF investors just a bit longer than the mainstream herd to react to changes in the market. The big rebound we’ve seen in the last few weeks is a classic example: despite the S&P 500’s 30% bounce since March 23, many CEFs still trade at ridiculous discounts!

That’s why I asked Michael to assemble a list of his best CEFs for this crisis. (And I asked that he hurry, before our shot at these incredible deals disappears!) He’s responded with the 4 ironclad funds I’ll show you when you click here.

These 4 buys throw off sparkling 8.4% average payouts! And talk about cheap: they sport discounts so wide, Michael is calling for 20%+ price gains in the next 12 months, even if the market only moves slightly higher from here!

And if we do get another downturn, these unusual discounts help keep our 4 funds’ market prices stable.

And we’ll enjoy their massive 8.4% dividends the entire time!

I can’t wait to show you Michael’s 4 “crisis-proof” 8.4%-paying CEFs. Everything you need to know is waiting for you here: names, tickers, buy-under prices, complete dividend histories—the works!