It’s a good time to be a virtual landlord. REIT (real estate investment trust) dividends just got a tax break, their stock prices are kicking off a rally and their yields are still on the generous side.

Let’s start with those yields, because that’s why we buy REITs. These firms get a pass from Uncle Sam if they dish most of their profits to us investors as dividends. (This generosity, by the way, has helped REITs outperform the broader stock market for much of their history.)

REIT Yields are Higher Than Usual 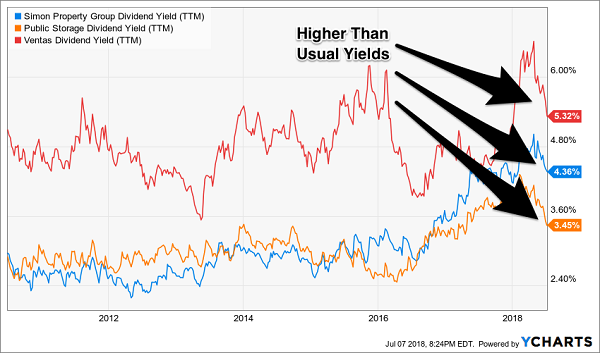 Generally this means that REIT prices are too low (and should be bought). Let’s look at Ventas, which is usually a slam dunk buy when it pays 6% or more – as it did earlier this year: 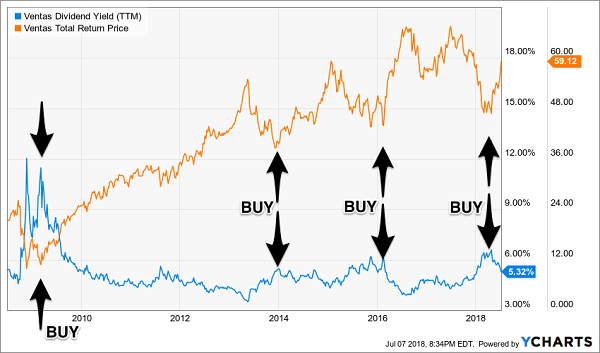 Kicking yourself for missing Ventas’ recent sale? Don’t worry, I’ll share an even better buy – one that pays 9%! – in a moment.

We’re talking REITs today because the current rally appears to have legs. Two weeks before the major bottom, I told readers to buy REITs. My reasoning was simple: REITs would soon “decouple” from the long bond. On January 25 I wrote:

In the short run, the “rates up, REITs down” theory puts on quite the show. When the 10-Year Treasury’s yield rises, REITs usually fall. And when its yield drops, REITs usually rally. This inverse relationship tends to hold up over multiple days, weeks and even months.

However the “long view” shows that many of these short-term moves are merely noise. It is possible for REITs and higher rates to coexist in profitable harmony

Over the previous 25 months, REITs had indeed moved down whenever rates moved up (and vice versa):

Rates Up, REITs Down Was a Rule… 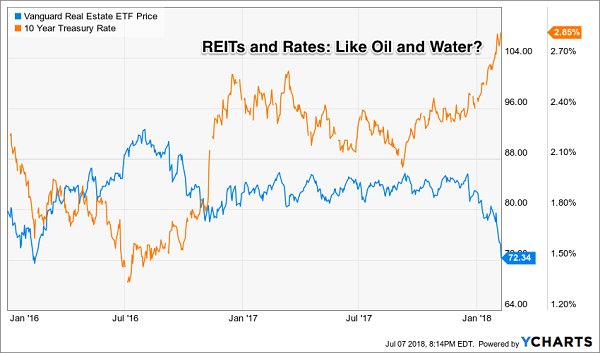 Then, a funny thing happened. REIT prices indeed “decoupled” from long-term rates (on February 8 to be specific). Their stocks started to rally while the long bond chopped sideways: 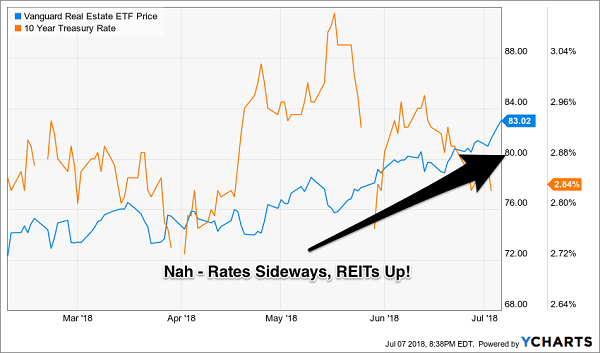 As regular readers know, I’m a bit of a “REIT addict.” I constantly comb the sector for timely deals, looking for big yields and bargains. I like to watch the movers and shakers – the stocks heading up as well as down.

Earlier in the year, out of the 257 or so REITs I follow, only five had stocks in uptrends. Five out of 257 moving higher!

Today, I count 146 with positive momentum. What changed? The “first-level” investors – those who buy and sell on headlines and cheesy maxims – began to realize that REITs can (and often do) move higher in the face of rising interest rates.

Also Mr. Market began to express doubt in Mr. Jerome Powell’s view of the financial world. While Fed Chair Powell says he needs to hike rates another 0.5% this year, the “long end” of the rate curve – set by the free market – appears to be saying “enough already.” The 10-year Treasury sits exactly where it did five months ago, and that’s been enough to kickoff a party for our favorite one-click landlords.

Of the 146 stocks I’m watching, seven in particular stand out as best buys right now.

The first pays 9.2% today and its stock has 20%+ upside from here. The firm’s senior leadership team – led by its founder of 35 years – is “all in” on their stock and its near-10% yield. Their collective ownership tops 30%. This is a level of skin-in-the-game rarely seen any more on Wall Street!

Which means, when the team decided to raise their payout for the sixth time in the last eight quarters, they were quite confident in their ability to fund $1 per share in dividends. This is particularly interesting to income investors like us because shares trade for less than $11 as I write. Which means we can buy shares to day to bank a 9.6% current yield that has management’s personal guarantee.

The next six are no slouches either! All seven REITs in my 8% No Withdrawal Portfolio check one of the two “dividend growth” or “high current yield” boxes for rising rate environments (with most actually checking both).

As a group, they pay an impressive 7.6% average yield today. That’s outstanding in a 2% to 3% world.

Combine 5% to 10%+ dividend growth with these high-single-digit current yields, and we have a formula for safe 15% to 20%+ annual gains from REITs. With a significant portion of that coming as cash dividends.

And thanks to the new tax plan, there’s never been a better time to buy REITs and live off their dividends.

(REIT investors will benefit from the tax breaks that “pass through” businesses will receive in the new code. Investors will be allowed deduct 20% of their REIT dividend income, which means the 37% tax bill will drop to 29.6%.)

But it’s important to choose your REITs wisely.

Don’t buy low-yielding static payer. Don’t buy a retail REIT, either (with that entire industry is in a death spiral, future rent checks will be dicey for years to come).

Instead, focus on recession-proof firms, such as those that rent hospitals, business lodging and warehouses filled with Amazon packages. Landlords that own properties that will be in high demand no matter what happens to interest rates or the economy from here, in other words.

I’d love to share my seven favorite recession-and-rate-proof REITs with you – including specific stock names, tickers and buy prices. Click here and I’ll send my full 8% No Withdrawal Portfolio research you to right now.