My best advice for you today is this: ignore the breathless trade-war panicking and focus on one thing: cash.

Because the truth is, US companies—like the 3 stout dividend growers we’ll dive into below—are swimming in it. So much so, in fact, that they don’t know what to do with it all … so they’re sending it right back out the door to us!

But don’t take my word for it; ask the folks at UBS, who just said that US companies are sitting on nearly $2.5 trillion in cash. And that’s just what they’re holding inside America’s borders. There’s another $3.5 trillion squirreled away overseas!

On top of that, new cash is literally flowing in the door faster than management can send it out. As my colleague Michael Foster recently pointed out, S&P 500 earnings are expected to spike 19% in the second quarter, after jumping nearly 25% in Q1.

And don’t forget the $1.5-trillion tax cut businesses grabbed thanks to tax reform. They also gained the ability to bring foreign cash home at a lower tax rate.

No wonder UBS says US companies are poised to drop $2.5 trillion on buybacks, dividends and mergers and acquisitions this year.

I’m sure I don’t have to tell you that all three of these moves (when done right, of course) line our pockets. It’s just a question of how you want your profits: in cash (dividends) or gains (M&A and buybacks, as both juice earnings, and share prices along with them).

So today we’re going to zero in on 3 stocks that are doing the best job of using their cash piles to fatten our portfolios, starting with…

SunTrust Banks (STI) just rolled out a 25% dividend hike on June 28, after passing the Federal Reserve’s latest “stress test” for banks. It also announced a $2.0-billion share-repurchase program—52% bigger than the previous one.

Funny thing is, hikes like these are standard fare for STI shareholders. Last summer, they grabbed a nice 53% “pay raise.”

But don’t take that to mean STI’s payout growth is slowing down. The stock still pays out a meager 29% of its $2.7 billion in yearly free cash flow (FCF) as dividends.

The stock has jumped more than 2% since the latest dividend hikes and buybacks were announced, but don’t worry, you haven’t missed your chance: the bank, which focuses on the fast-growing southeast and mid-Atlantic regions, is still cheap at 11.8 times FCF.

(An added plus: its regional focus gives it insulation from any trade-war blowback.)

That’s a nice raise for doing nothing, and it helped—along with a lower tax rate from tax reform and fewer shares outstanding due to its buybacks—drive a 42% jump in earnings per share in the first quarter.

Management Knows a Bargain When It Sees One 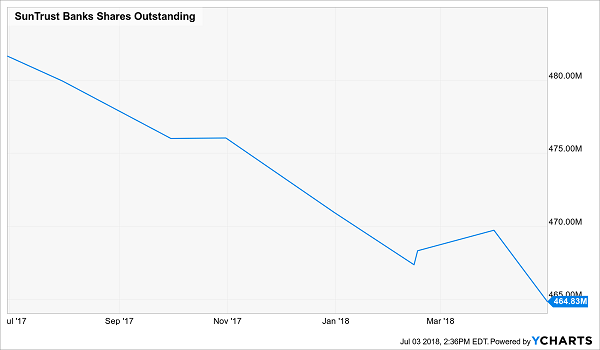 And with the Federal Reserve poised to raise rates 2 more times this year, the bank’s NII will keep quietly rising, giving it more room to up its dividend (current yield: 2.4%) and buybacks—and its share price right along with them.

Wyndham Worldwide was a bargain before it renamed itself Wyndham Destinations (WYND) and spun off its hotel arm as Wyndham Hotels & Resorts (WH) in May … and both stocks are even cheaper now.

Shares of both the parent and the spinoff are down since the split occurred, which is normal as investors look at their portfolios, spot the two “new” stocks and decide which to keep and which to toss. 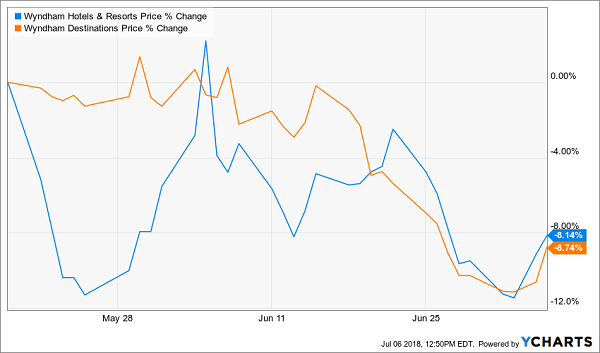 So which is the better bet?

Because it uses a terrific business model to reap the most gains (at the least risk) from its 9,000 or so hotels in 80 countries.

It does it by offloading its risk to franchisees, who run its hotels on steady 10-to-20-year contracts. And Wyndham doesn’t put its whole business on just a few owners, either: it has 5,700 in all, with most owning just one hotel.

More on WH in a moment.

First, if you’re worried about the declines in the share price I just showed you, here’s proof that spinoffs give you a great shot at beating the market in the long run: 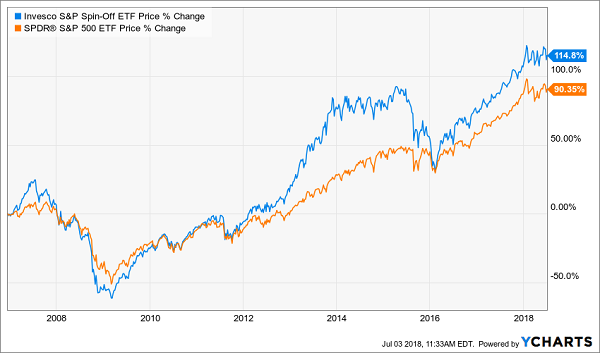 This is the performance of the Invesco S&P Spin-Off ETF (CSD), the benchmark for spinoffs, which, as you can see, has crushed the S&P 500 since inception back in ’06.

The bottom line? Any price decline after a spinoff is a buying opportunity.

Which brings us back to Wyndham Hotels & Resorts, which has the spinoff and a major acquisition behind it: the combined company closed its $2-billion purchase of La Quinta Holdings in May, then added it to WH.

La Quinta adds 900 hotels and bulks up WH’s presence in the red-hot upper-midscale market, giving it a shiny lure for the exploding global middle class, a group the World Bank sees surging to 4.9 billion people by 2039.

Management also has a long history of buybacks, including in the run-up to the spinoff and the closure of the La Quinta deal, while the combined company was trading at around 6 times cash flow:

Wyndham Buys Up Its Own Stock Pre-Spinoff 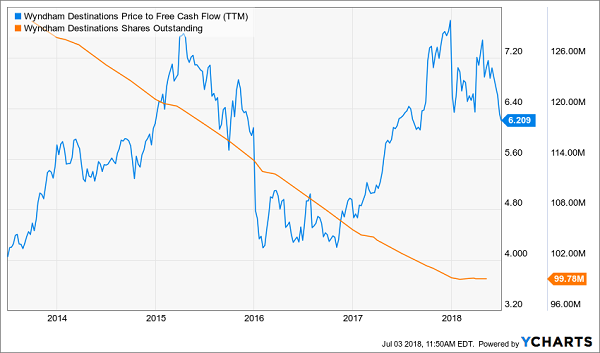 Finally, Wyndham Hotels & Resorts and Wyndham Destinations have announced dividends of $0.25 and $0.41, respectively. That gives WH a 1.7% forward yield but plenty of room for higher payouts to come, especially when you consider that the combined company was only paying out 34% of FCF as dividends before the spinoff.

Prudential Financial (PRU) is a buyback machine, having announced $1.5 billion in repurchases back in December, just as tax reform got the stamp of approval.

The thing that’s striking about PRU’s management is its Jedi-like mastery of the buyback, knowing exactly when to buy the company’s stock and when to hold off.

Look at its handiwork over the past year—and at how PRU halted its buybacks when the stock rose, then boosted them on the dips: 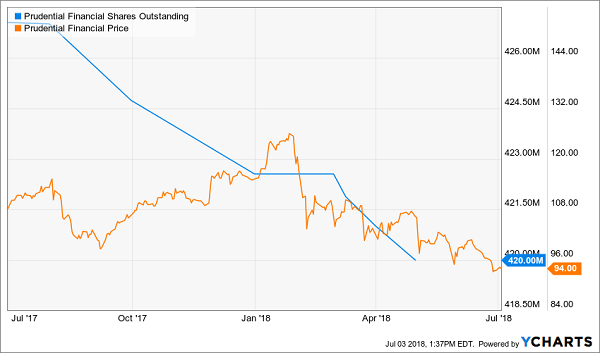 The stock has been dragged down with other financials as first-level investors’ euphoria over rising rates cooled. But that selloff was way overdone with PRU, which now trades at a totally absurd 2.9 times FCF! Heck, it even trades at 77% of book value, or less than it would be worth if it were sold off in pieces today.

And get this: the company’s $60 billion in yearly revenue is 50% higher than its market cap!

It’s a complete injustice, especially given that PRU’s retirement products set it up to gain as more baby boomers get set to clock out of the workforce.

That, plus PRU’s smart buybacks, will amplify its dividend growth (because buybacks leave it with fewer shares on which to pay out): the stock yields 3.8% now and has already more than doubled its payout in the last 5 years: 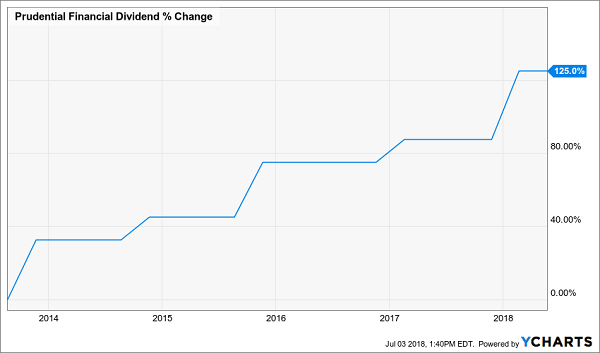 You’re looking at the wrong number!

What you really need to focus on is your “yield on cost”—that is, how much of a yield you’d be pocketing on a buy you make today, say, 5 years out from now.

Let’s look at Prudential, with its 3.8% dividend. That’s nice, but if management were to boost the payout 125% in the next 5 years—as it has in the last 5—you’d be pocketing a tidy 8.6% on your original investment.

But of course, you’ll need Prudential to keep its fantastic dividend streak going … and it should be able to. But of course, that’s not guaranteed.

Luckily, there’s my “8% No-Withdrawal” retirement portfolio.” It hands you an average payout of 8% today—there will be no waiting (and hoping) till 2023 to get a life-changing dividend like that.

And when I say “life-changing,” I mean it. With an average payout that high, you can put the one thing every retiree wants solidly within your grasp: the ability to retire on dividends alone, without having to sell a single stock in your golden years.

And remember, that 8% dividend is just the average. You’ll also find payers of even bigger income streams of 8.7% and higher.

The whole profitable story is just waiting for you now.

CLICK HERE to get full details on this portfolio—which is perfect for the tariff- and interest rate-obsessed times we now live in. You’ll get all the info you need on these 6 bargain 8% payers: names, ticker symbols, buy-under prices, the works.

Don’t miss out! Get instant access to this exclusive 8% retirement portfolio now.