The Bull Market in CEFs: Why It Really Is Different This Time

So far in 2017, the SPDR S&P 500 ETF (SPY) is up 7.8%, including dividends. That’s impressive considering the geopolitical calamities, unpredictable moves from the White House, economic uncertainty and rising interest rates the market is facing.

But what’s even more impressive is that over 200 closed-end funds (CEFs) are up even more than that.

Take the PIMCO Global StocksPLUS & Income Fund (PGP), which has soared over 36% in less than five months, largely driven by the bull market in US stocks. But the Morgan Stanley India Investment Fund (IIF) is no slouch, either, up 32%, excluding dividends, even though it focuses on Indian equities.

It isn’t just stock-based CEFs getting in on the action: the real estate-focused Alpine Global Premier Property Fund (AWP) is up 23.1%, while the bond-focused PIMCO Strategic Income Fund (RCS) has gained 15%.

So what are we to do? Let’s answer that by first looking at what we should not do: get suckered into thinking we can blindly pick any CEF and expect to come out ahead.

I’ve already heard from many readers who are piling into PIMCO funds because of the company’s established brand name.

Sadly, that’s not a winning strategy.

The bond-focused PIMCO High-Income Fund (PHK) is down 2%, and the PIMCO Municipal Income Fund (PMF) is off 5.7%, making it one of the worst-performing CEFs of 2017. So much for going with the big guys!

Lately, a few exchange-traded funds have emerged to provide broad exposure to CEFs. The First Trust CEF Income Opportunity ETF Total Return Fund (FCEF) is one of them. And it’s doing okay—up 9%, versus SPY’s 7.8%:

Passive CEF Tracking Delivers a Win … With a Catch 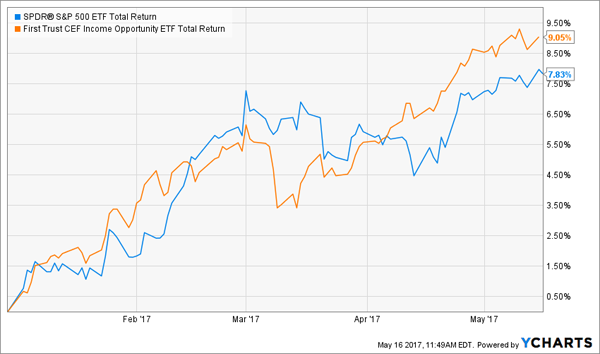 FCEF’s return is mostly in line with the broader CEF market, which has gained 8.1% in 2017, excluding dividends (or 10.5% with dividends included). But that’s because a rising tide is lifting most CEF boats; when that tide turns—as it inevitably will—you can expect the laggards to drag FCEF down with them.

And it’s easy to see how a small group of funds are accounting for much of the gains in CEF land these days: Take a look at the average return for the 500 CEFs in CEF Insider’s Total CEF Index versus the median, as well as the top 100 funds versus the bottom 100:

The 146-basis-point gap between the average and the median tells us that the biggest CEF winners are doing substantially better than the average fund, which means picking the right CEF is absolutely essential to winning in this game.

What the Sectors Say

What about individual sectors of the CEF world? Turns out there’s a big disconnect here, too.

For example, stocks are beating bonds in 2017, and municipal bonds are getting hammered particularly hard. But even though muni-bond CEFs are the worst performers of 2017 so far, they’re still up over 4% on price alone. Considering their tax-free income (as muni bonds are exempt from federal and, in some cases, state taxes), that’s not a bad return at all.

To make matters even more confusing, covered-call funds (or funds that buy stocks and sell call options against them) and equity funds have a similar performance so far, while corporate bonds are doing a bit worse but are still up sharply for the year.

Foreign stocks, meanwhile, are way out front, as we can see when we take a glance at the five sub-indexes that make up our CEF Insider Total CEF Index: 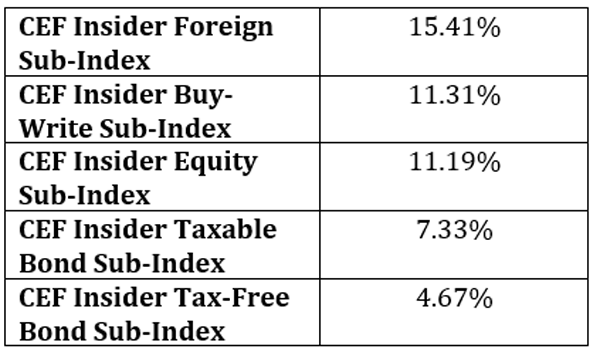 As you can see, funds in every category are up, on average. But the big outperformance in foreign stocks isn’t evenly distributed; while the Morgan Stanley India Investment Fund is up 32% and every Asian fund is up 12% or more, some funds, like the Templeton Emerging Markets Income Fund (TEI) and the GDL Fund (GDL), are up 5% or less, while the JH Tax Advantaged Global Fund (HTY) is actually down 3%.

That leads us to an important consideration when choosing CEFs: you can’t just blindly pick any fund in an asset class that’s killing it at any particular moment. Instead, you have to look a bit deeper to understand why some funds are massively outperforming others.

So if asset class doesn’t matter, what’s behind the gains?

A large part of it stems from an eradication of fund discounts. Since CEFs trade at either a discount or a premium to their net asset value (NAV, or the value of their underlying assets), the market can occasionally price in bigger gaps between the funds’ NAVs and their actual market prices.

And in 2017, this has mostly been a story of discounts getting smaller:

The rate of fund discounts has been accelerating for the last few weeks, narrowing the average discount to 4.2% from a low of 6.4% earlier this year. This, in part, has helped CEFs rise in value.

But it isn’t a trend that will continue forever. In fact, it’s already over. Although discounts for both equity and bond funds remain at 52-week highs, we’ve already seen their markdowns widen over the last couple weeks, and you can expect that correction to continue.

What’s more, the CEF bull market isn’t being driven only by discounted funds becoming less discounted. Funds trading at a premium are also seeing their premiums rise, and many of those premium funds are outperforming the CEF market as a whole.

For instance, the high-flying PIMCO Global StocksPLUS & Income Fund I mentioned earlier trades at an unbelievable 72.6% premium to NAV, meaning for every $1 in assets you’ll have to pay $1.73! There are a number of reasons why this is bad and cannot continue, so buying funds based on recent past performance won’t work, either.

But for now, CEFs, whether at a premium or a discount, have been driven higher by a flow of dollars into this once-obscure corner of the investment universe. The timing of this defies what many CEF naysayers have been saying for years, namely that rising interest rates and a bull market in stocks will hammer CEFs as investors seek safer havens such as US Treasuries, while riskier assets, such as growth stocks and CEFs, face higher borrowing costs.

This “wisdom” has been proven wrong in 2017, which has been the best year for CEFs since the financial crisis. The reality is that higher borrowing costs aren’t by themselves bad for CEFs, which can also leverage those elevated borrowing costs to get higher returns (since many CEFs are not only debtors but creditors too).

So if the market was wrong about higher borrowing costs being bad for CEFs (not really), a bull market driving money away from CEFs (again, no) and higher interest rates driving money to US Treasuries (long-term Treasuries are up a whopping 1.7% year-to-date), what else are they wrong about?

The 4 Best CEFs to Buy Now

I’ve pinpointed 4 CEFs set to march higher as the “stealth” bull market in these funds continues. These 4 still sport far wider discounts to NAV than usual, and I expect those windows to slam shut soon—propelling to them to easy double-digit gains—no matter what happens with the rest of the CEF space.

These 4 funds demolish another long-held (and completely wrong) investor myth: that you can’t get big capital gains and high yields in the same investment. Right now, my 4 favorite CEFs throw off rock-solid 7.6% payouts, on average, and as their unusual discounts disappear, we’re looking at 20%+ upside in the next 12 months, at least.

Don’t miss out! Click here to get the names of all 4 of these double-digit winners now!