Most folks buy closed-end funds for one reason: big yields!

But that’s not the only reason—and depending on your situation, it may not even the best reason for you, as I’ll show you shortly. (I’ll also reveal 3 tricky, but easily avoidable, blunders many folks make with CEFs).

According to BlackRock’s latest quarterly update, dividend yields range from an average of 2.25% in the lowest-paying CEF sector (emerging market equity) to 9.9% in the highest paying (municipal-bond funds). (The muni-bond fund yield is on a tax-equivalent basis and based on a 43.4% tax rate, as munis are exempt from federal income tax):

When you take these sectors and average them out, you get a gaudy 7.8% payout!

That has to grab your attention if you’re stuck “grinding it out” with the so-called “Dividend Aristocrats”— stocks that have hiked their payouts for 25 years or more.

Truth is, these pretenders don’t even grab the bottom end of our CEF range: the benchmark ProShares S&P 500 Dividend Aristocrats ETF (NOBL) yields just 2.0% as I write. That’s barely ahead of the S&P 500 as a whole … and a pretty sad state of affairs if you’re on the hunt for income.

Worse, you can’t even expect to beat the market here: Since NOBL’s inception in October 2013, it’s lagged the S&P 500 substantially, even when you include dividends. 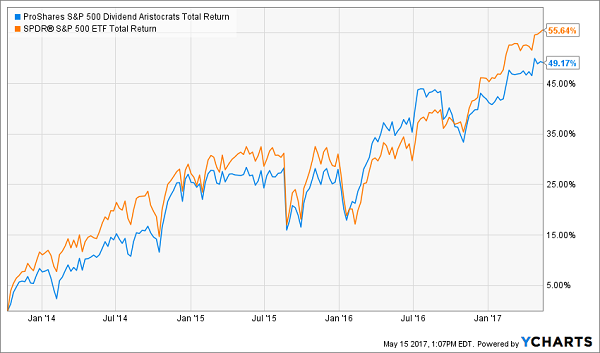 It gets worse when you consider that NOBL has a built-in advantage: dividend growth. As I wrote on May 15, dividend-growth stocks have a history of outperforming non-dividend payers over long periods.

But that hasn’t saved NOBL, because the 50 or so “Aristocrats” are riddled with names that dribble out puny yearly hikes—enough to keep their membership in the club, but not enough to trigger a stampede into their stocks. I’m looking at you, AT&T (T).

Which brings me to the benefit you might love even more than CEFs’ payouts, depending on how close you are to clocking out of the workforce: serious upside potential.

Take a look at this graph, showing the average discount to net asset value (NAV, or the value of a fund’s underlying holdings) in our various CEF sectors:

Home of the Deal

What does all this mean?

Simply put, if we were to buy, say, your typical emerging-market equity CEF right now, we’d get $1.13 of assets for every dollar we invest. That’s free money!

These unique discounts can drive powerful gains, because they can (and regularly do) slam shut or even turn into premiums in short order, putting a nice extra boost under the share price.

This, incidentally, is why I never buy CEFs trading at a premium. As you can probably guess from the last graph I showed you, most CEFs trade at discounts to NAV, so there’s just no reason to overpay.

However, buying a CEF just because it’s trading at a discount can also be risky, which brings me to the first blunder many folks make when they buy these funds:

A hefty discount isn’t much good if that window never closes. That’s why you need to look beyond a fund’s current discount to its historical discount to see if you’re seeing an unusual pattern you can profit from … or just another perennial laggard (which, to be honest, most CEFs are).

Take the Aberdeen Emerging Market SMC Opportunities Fund (ABE), which trades at a 9% discount to NAV. Sounds great, right? Too bad ABE’s been bumping along at a big discount for years. 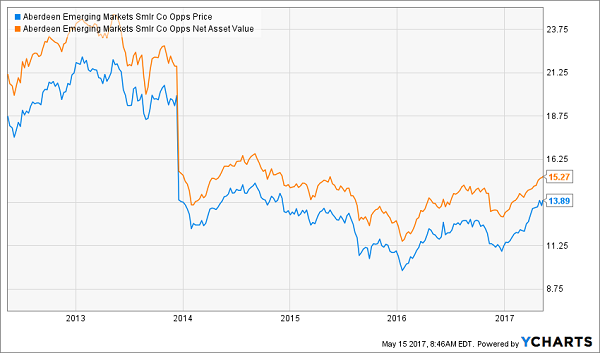 In the past 12 months, the average discount to NAV has averaged 12.9%, and the 52-week low is 16.2%. That means the current discount is more likely to widen, not contract closer to NAV, weighing down ABE’s share price even more.

Many folks run away from CEFs before they even get started. Why? Because they look at the fees, compare them to what they pay on bargain-basement ETFs … and that’s where the conversation ends.

After all, with the likes of NOBL charging 0.35% of assets yearly and SPY clocking in at an almost imperceptible 0.09%, what to make of CEFs like, say, the Gabelli Dividend & Income Trust (GDV), which charges 1.4%?

Answer: That 1.4% gets you inside the mind of famed value investor Mario Gabelli, who runs his namesake fund. And in the CEF world, top-flight management is a must—and well worth paying for (note that I said “top-flight”: there’s no point paying for mediocre management with no plan to close the fund’s discount window; see mistake No. 1).

GDV, for example, has outperformed SPY in the last 10 years, fees included: 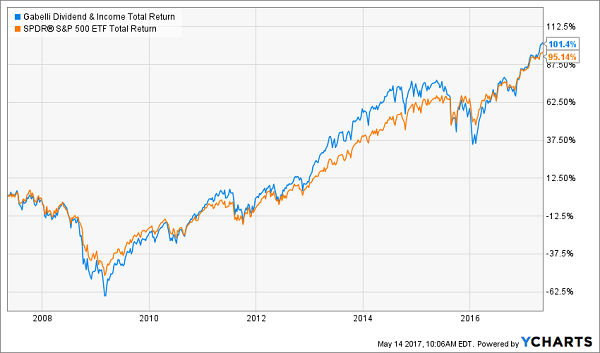 There may not seem like much of a gap, and GDV has lagged at times, but we’re talking total returns here (including dividends), and this fund is throwing off a 6.2% yield as I write—more than tripling up SPY’s payout—so a large portion of the gain you see in the chart above came in cash.

Finally, most folks have it wrong when it comes to how CEF fees are paid.

During the fund’s fiscal year, a CEF’s managers pull the fee from the fund’s cash holdings, lowering the CEF’s NAV. So if a fund has $1 billion in assets under management and the management fee is 1%, the fund managers will withdraw $10 million from the fund automatically.

The bottom line is you’re not getting a bill in the mail here—and you’re still getting GDV’s full dividend payout, the yield of which is calculated based on the market price, not NAV.

Remember when I said you should never buy a CEF at a premium?

That goes double at its IPO, because CEFs always trade at a premium in the early days. That’s because all the attendant fees related to the IPO weigh down the fund’s NAV, pulling it lower than the share price—a situation that takes a while to work itself out.

Take the RiverNorth/DoubleLine Strategic Opportunity Fund (OPP), which started trading in late September 2016. Today, you can grab shares at a 5.1% discount to NAV, but if you’d bought at the IPO, you would have paid 2.2% more than OPP is actually worth!

The same pattern is playing out with the latest CEF IPO, the Nuveen Preferred and Income 2022 Term Fund (JPT), which started trading in January at a 1.4% premium to NAV. That’s since been cut to a 0.40% discount, and it’s likely to keep dropping, so it’s too early to think about getting in on this one.

Beating the Subprime Crisis by Investing in … Housing?!

One of our favorite CEFs pulled off something that sounds impossible—till you look at this chart: 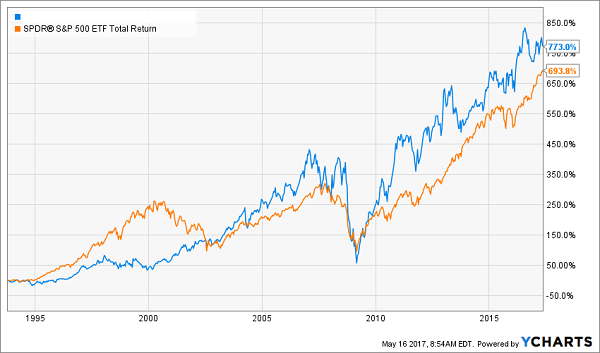 As you can see, it fell during the subprime mortgage crisis—like everything else—but it recovered years faster than the market as a whole. A big reason: its 7%+ dividend, which it religiously paid out the entire time.

And they did it by investing in real estate—real estate investment trusts (REITs), to be exact!

That’s how sharp this fund’s management team is. And if that kind of talent isn’t worth paying a little extra for, I don’t know what is.

But here’s the crazy thing: this fund trades at a discount to NAV—and wider than its historical average, too!

That means it’s time for us to pounce.

We’ve put everything you need to know about this powerful fund and 3 other CEFs we’re pounding the table on now in a new FREE report, “4 Great CEFs to Buy Now: 7.5% Yields and 20% Upside Ahead.”

As the name implies, these 4 funds throw off a gaudy 7.5% payout, on average, and their unusual discounts will help drive serious upside in the next 12 months.

Simply click here to get our complete CEF investing strategy and your own copy of this special report now.