Unfortunately, I don’t think we’re on the other side of this just yet. Capital preservation should still be our top priority until we see true “green shoots” rather than a standard relief rally.

For those of you who can’t help but lick your chops, I’d encourage you to spend your time compiling your dream dividend shopping list. We’re going to talk about its composition today. Now this may sound strange coming from me, a guy with a book at the top of the Bonds category on Amazon, but here goes:

In the words of the insightful Jim Bianco, the government has basically “nationalized the bond market” with the exception of high-yield paper. The Federal Reserve, in its effort to restore confidence in corporate credit, is now backstopping anything that is investment grade quality or better.

And since the Fed has the ability to print money conduct unlimited quantitative easing, this makes safe bonds an even safer place to be. But security doesn’t necessarily equate to returns.

Investment grade fixed income has performed well on a relative basis during this downturn. Problem is, it’s tough to make a living collecting 1% or 2%. Sure, you could argue that you “win” when yields compress even more, as bond prices rise when yields fall. But c’mon, that game has almost played out.

Besides, with Congress and the Federal Reserve each tossing around trillions of dollars at a time, you’d have to offer me an insanely high yield to get me into anything “fixed” for five, ten or (god forbid) thirty years. There’s only so many trillions you can toss around before inflation, eventually, becomes a potential issue.

Inflation, of course, is tomorrow’s problem—so who cares about that today? We are in the first inning of a recession and in the middle of a battle against a virus with many unknowns. The “D” words—debt deflation and a recession spiraling into a potential depression—are the near-term concerns (or were, until the sharp “relief rally” that we’ve been waiting for kicked off last Tuesday!)

Debt deflation is a “dirty” financial term that we haven’t heard since 2008. It’s what happens when capital that previously existed (think of most brokerage statements in January 2020) goes to “Money Heaven.” For example, the stock market melts down and a rich guy or gal is now unable to make their next Tesla payment.

The premature exit of this money from our world means a debt (say for a home, or commercial mortgage) potentially goes unpaid. Each missed payment risks toppling the next “debt domino” in the chain.

Today is April first, and landlords around the globe are hearing: “I didn’t get paid this month, so I can’t pay my rent.” Which means less money for the landlord (or lender), who had the rent (or loan) on his or her books as “performing” until now.

Some historians say it was debt deflation that caused the Great Depression which followed the 1929 stock market crash. Modern-day Fed fans will say their decisive action in 2008 prevented the “Great Recession” from spiraling into another depression. (While opponents say the 2008 Fed “two-step” prolonged the underlying problems, which are coming to roost again in 2020.)

I’ll let others debate who’s right and who’s wrong. Our beat here is dividends, and we do follow the high-yield bond market, particularly closed-end funds (CEFs), with interest.

Sure, the high-yield market contains landmines (hence the name “junk”). But if you can find a great manager, you can really benefit from their expertise and ability to find deals where the pension funds aren’t allowed to shop.

This is why I prefer CEFs over ETFs. Over time, CEFs deliver “alpha”—or outperformance—over their more popular, widely marketed cousins.

In other words, when we find the right manager and price, we can pick up a generous yield and pay just 85 or 90 cents on the dollar for the curated portfolio of bonds it owns. Sounds like a great deal, and it sure can be.

But funds like these do suffer when global liquidity dries up. It happened in recent weeks, and I’m concerned that another leg down in the broader markets would see fixed income CEFs and ETFs alike retesting their recent lows.

Didn’t we bottom out already last Monday? It’s possible, but not probable. Let’s think back to 2008, our closest modern analogy, which bottomed out over a period of months, drawing an agonizing “W.” Unfortunately the second half of the W was a bit askew: 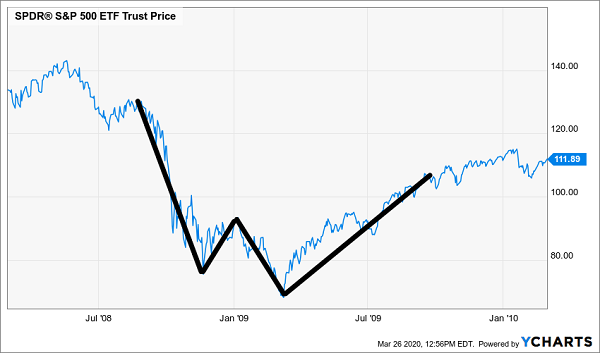 Most investors think back to 2008 and think: “If only I’d had the guts to buy stocks that fall, I’d have made a fortune.” They were correct, as the markets traded much higher one-year later. However, many dumped their positions on the final leg down.

If you own bond funds now, I don’t have a problem with you hanging on to long-term positions that you believe in. After all, anyone who started a year-long vacation in late 2008 saw their portfolio outperform most others. When we look out twelve months from today, odds are that prices will be higher (high yield included).

But don’t be afraid to sit on cash. I think we’re going to get even better prices to buy at. And when we do, I’d rather use a once-a-decade buying opportunity to load up on the best dividend paying stocks rather than bonds. Give me unlimited upside.

Let’s take a couple of our dividend favorites, one stock (Omega Healthcare Investors (OHI)) and one bond fund (Aberdeen Asia-Pacific Income Fund (FAX)). In the “shoulda, woulda, coulda” games that investors often conduct after the fact, five years removed from that historic March 2009 buying opportunity, FAX investors would have been wishing that they’d bought OHI instead: 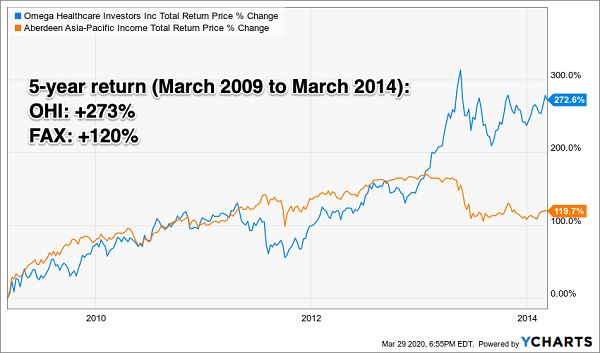 So am I saying it’s time to get back into OHI today? Not yet. REITs (real estate investment trusts) that pay dividends from cash flows depend on their tenants actually paying their rents. And rent payments are not the “automatic” checks they were just 60 days ago.

Of course there are going to be bargain REITs that are selling cheaply but still collecting rents just fine. They’ll be the stocks to buy when the clouds begin to clear.

Until we have a bit more clarity, I do like cash (a rare thing for me to say, reserved for times like 2008 and 2020). I understand that some readers are going to dollar-cost average through this whole thing, and that can work provided you are averaging into tomorrow’s winners (the firms with cash flows on the other side of this pandemic).

Whatever you do, I hope we’re in agreement that we shouldn’t lock up money in any lame fixed income vehicles. Cash doesn’t pay much less and it’s a click away to deploy for the bargains that are likely to abound in the months ahead.