Nearly two years ago, our Contrarian Income Report service picked up cheap oil dividends that, at the time, yielded nearly 11.8%. With oil trading at negative prices (meaning producers were paying people to take barrels off of their hands), our purchase didn’t feel warm and fuzzy. But then again, most successful contrarian trades don’t.

We recognized that oil prices were likely in the midst of a “Crash ‘n’ Rally” pattern. This is an oil-price phenomenon that has played out several times before.

Energy prices tend to “crash ’n’ rally.” The crash is quick, while the ensuing rally lasts for years. Here’s how it played out in 2008 and 2020:

While demand can come back quickly, supply takes much longer to come back online. That’s why crude crashes typically last mere months, but rallies unfold over many years. Take 2008’s oil crash, for example: 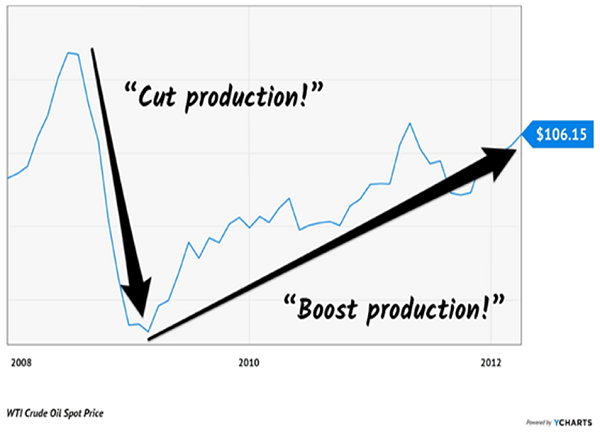 WTI Is Back Near $90/Barrel 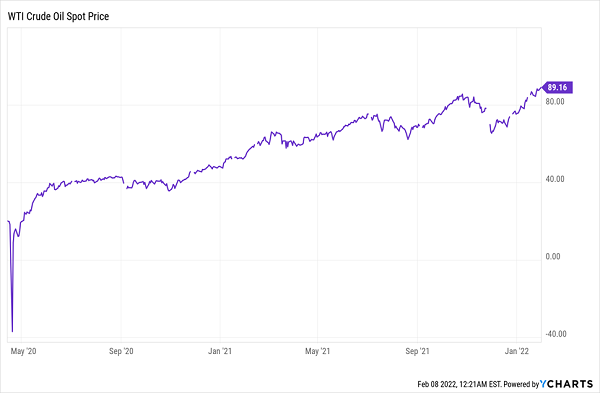 Believe it or not, oil and gas stocks are still, on the whole, a pretty remarkable bargain. Energy trades at 12.3 times earnings estimates—the cheapest S&P 500 sector, and by a comfortable margin.

But we can buy at an even bigger discount by leveraging one of my favorite market vehicles: the closed-end fund (CEF).

In short, closed-end funds have a number of advantages over their ETF and mutual fund cousins, and among them is their ability to trade at a premium or discount to the assets they hold. Thus, with CEFs, not only can you buy undervalued stocks—you can buy them at even bigger discounts than if you were to purchase each stock individually on the open market.

Combine that with far-above average yields for your typical CEF, and you have a strong base case for investing in energy through these special funds.

Let’s see whether that logic holds up by looking at three energy funds yielding between 4% and 6% that offer 8% to 13% discounts on top of the sector’s already dirt-cheap valuations.

The BlackRock Energy and Resources Trust (BGR) is a simple, straightforward actively managed CEF with a tight portfolio of less than 30 energy stocks.

BGR isn’t much different than a traditional energy-sector index fund. Its holdings provide you access to integrated energy majors (53% of assets), exploration and production companies (29%), distribution firms (9%), refiners and marketers (7%) and oil services (1%). (The remaining assets are in cash.)

Because the portfolio is so narrow, individual companies—specifically, the international integrated majors—take up substantial amounts of assets. Chevron (CVX) alone accounts for 14% of the portfolio. Britain’s Shell (SHEL) takes up 12%, and France’s TotalEnergies (TTE) is another 9%.

This blend of stocks yields a little more than the sector’s 3.6%, but not by much. That’s actually more exception than norm compared to many CEFs, which drastically out-yield comparable index funds. That’s usually in part because they use some amount of debt leverage, but BGR again differs in that it uses a paper-thin 0.2%.

The result has been quite a disappointing run of underperformance for BlackRock Energy and Resources—a stern reminder that a closed-end fund isn’t automatically an upgrade just on the virtue of being a CEF. 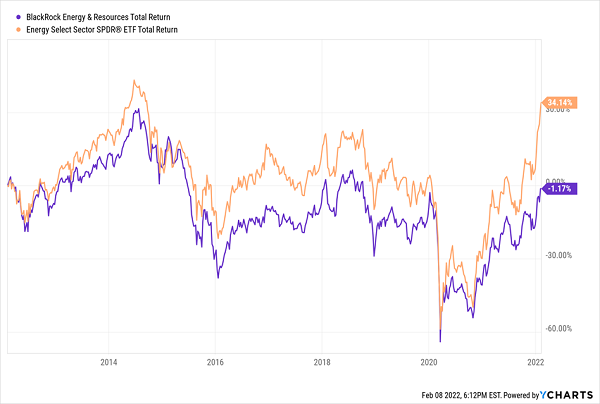 The only CEF-esque trait that’s really of note is that the fund trades at an 11% discount to its underlying assets, which means you’re effectively buying those assets at 89 cents on the dollar. But that discount isn’t nearly as steep when you realize the fund historically has traded at a nearly 9% discount on average over the past five years.

You’d be hard-pressed to buy into an investment fund with as much wear on its tires as Adams Natural Resources Fund (PEO). The CEF’s inception was back in 1929, meaning it’s only a few years away from celebrating its centennial, and it has generated distributions for its investors for more than 80 years.

Those distributions, however, are on the odd side. Any data provider will tell you that PEO yields just 0.8% right now, but that’s based on its most recent payout, which is part of a lopsided distribution schedule. PEO is actually committed to a 6% distribution rate—however, it gets there via three smaller distributions throughout the year, then a big catch-up payment during the fourth quarter.

So, even though it ultimately delivers a high rate of distributions, this might not be an ideal choice for retirement investors looking for juicy and consistent payouts.

The 55-stock portfolio itself is actually a hybrid of sorts—it’s primarily invested in integrated majors, E&P plays and other energy stocks, but it also has exposure to materials companies such as industrial gas producer Linde (LIN) and even paintmaker Sherwin-Williams (SHW).

So, you’re still completely exposed to cyclical sectors that enjoy many of the same tailwinds, but with a little less sensitivity to oil and gas prices than a completely energy-centric portfolio. Despite this, Adams Natural Resources behaves similarly to a basic energy index fund, albeit with slightly better performance of late. 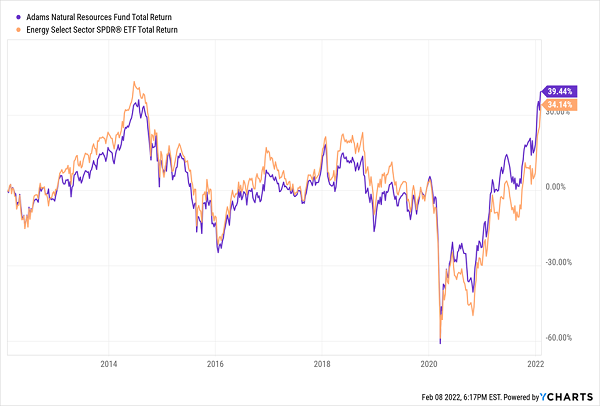 PEO still could squeeze out a little extra potential from the sector, especially if you’re getting it on the cheap. But a current 13% discount versus a 15% long-term average means that while you’re technically buying the fund’s assets at a double-digit discount, that valuation disparity isn’t likely to translate into a big return swing.

Where we start to get some more separation from a vanilla energy index strategy is the BlackRock Resources & Commodities Strategy Trust (BCX) – but like with PEO, that’s because the fund gets away from pure-play energy. 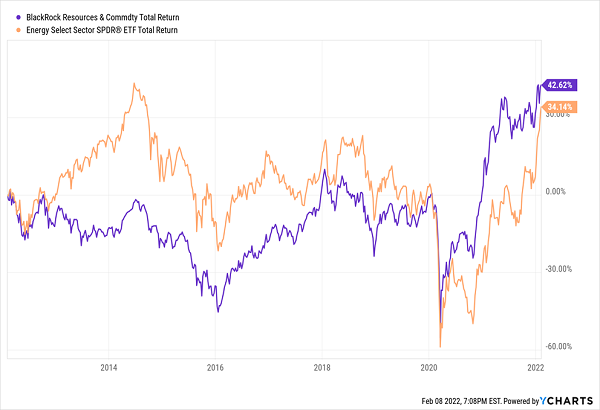 BCX splits its attention in a few directions: energy, still the largest slice by far at 43%; agriculture at 27%; mining at another 27%. The rest is scattered among “other” industries.

However, the larger yield isn’t because of this differentiated sector split, nor is it because of leverage (it only has about 2%). This is largely a result of another CEF spice: the use of options trading to amplify yield. Thus, BCX is able to offer a nearly 5% yield that’s more than a percentage point greater than the energy sector and well more than 3x the broader market.

Give Me 4 Minutes, I’ll 4X Your Retirement Income

PEO and BCX are decent funds, but I’m hard-pressed to call them great. They’re certainly not what you or I could consider “retirement locks.”

If we want a cozy, comfortable retirement without bleeding your nest egg dry, we need to be able to plan around our income with laser precision.

We can’t with funds that have odd distribution schedules or are reliant on boom-and-bust cycles in oil.

But we can with my “Perfect Income” portfolio.

The perfect dividend retirement stocks have several things in common:

Getting each and every one of these things from any single holding might sound impossible. But it’s par for the course for every position in my “Perfect Income” portfolio.

Take control of your financial legacy today. Let me show you how to get up to 4x your current income with this simple, straightforward system. Click here to get a FREE copy of my Perfect Income Portfolio report, including tickers, dividend yields, full analyses of each pick … and a few other bonuses!