How to Avoid the Market’s 25% Dividend Drop

Mainstream financial channels have made a big deal out of the current, furious relief rally (“Is it a ‘V-shaped’ recovery?” they muse). Whether it’s a V, a W, an L, a Nike swoosh or (my favorite) a bathtub, the fact is that many cash flows—and hence the dividends they fund—are under siege.

(This is no surprise. The average bear market lasts 12 to 18 months. We are just beginning month three—yikes.)

But all hope is not lost! We can still find secure yields, even reliable monthly dividends to boot, right now. In a moment, we’ll sift through the market’s trash heap to find these valuable sources of income stability.

First, let’s appreciate and respect how scary this dividend environment is right now. Consider this sobering line from the Wall Street Journal:

“More companies have suspended or canceled their dividends so far this year than in the previous 10 years combined, with companies scrambling to preserve cash as the coronavirus pandemic saps revenue.”

Analysts had broadly expected some level of dividend damage. Goldman Sachs surveyed the increasingly worsening economic landscape, as well as several dividend actions, in late March after Wall Street had come to terms with just how serious the pandemic’s fallout would be.

Their read of the tea leaves:

“We expect a wave of dividend suspensions, cuts and eliminations will result in (S&P 500) dividends declining by 38% during the next nine months.”

After factoring in an aggregate 9% increase in payouts during Q1, that would result in a 25% year-over-year decline in dividends for the blue-chip index this year.

As the WSJ points out, Goldman wasn’t full of hot air. Worse still is that these dividend cuts aren’t just happening in low-quality small caps that needed to be culled. Just look at some of the once highly touted names that have been forced to pare back or outright break their commitments to shareholders: 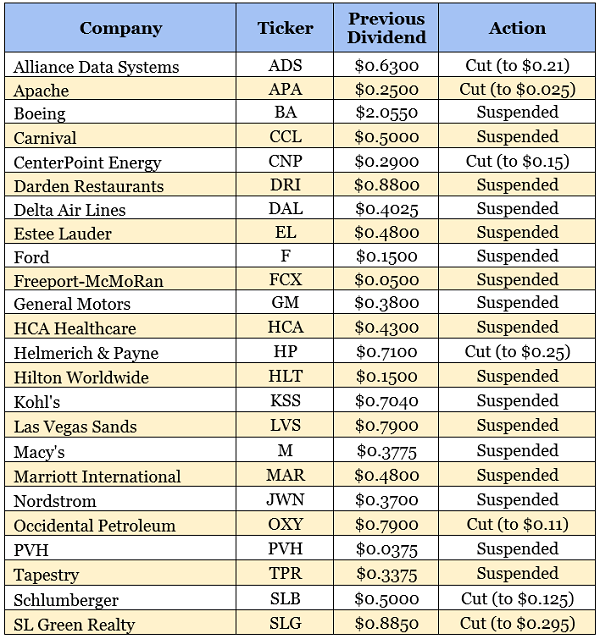 Retirement investors are watching their well-laid plans erupt before their very own eyes. But thankfully, there’s still time to pull up stakes in these dividend failures and set up camp in some of the market’s more reliable dividend stocks.

Better still: A handful of companies that are keeping their dividends steady (or even raising them) have another ace in the hole: their monthly payout schedules. While some stocks distribute cash every quarter, twice a year or in a few cases, just once every 365 days, monthly dividend payers deliver income as frequently as many American workplaces.

It’s perfect for planning out your finances. Monthly dividends also provide a compounding boost if you’re reinvesting those dividends. And these regular payouts provide much-needed peace of mind—something in short supply these days.

Let’s discuss a select group of monthly dividend stocks, yielding between about 5% and 10%, with the ability to grind this crisis out.

Stag Industrial owns 450 buildings representing 91.4 million square feet across 38 states. Given some of the industries that Stag is exposed to—air freight, auto components, commercial supplies—it’s bound to feel some pinch. But a 17% decline from the bull-market highs indicates that while investors are cautious, they don’t see any grave danger on the horizon. Nor should they.

Stag is taking precautions, of course: The typically acquisitive company has paused M&A to wait out the volatility, and it recently refinanced about $300 million in secured debt originally set to mature this year.

But operations are strong. The company provided a COVID-19 update with little in the way of red flags. Particularly reassuring: Less than 5% of Stag’s tenants have asked for rent relief, and that relief is equal to about 1% of annualized based rent. Moreover, the company expects most of it to be short-term deferral of base rent that will eventually be paid back.

Plenty of Liquidity…If Stag Even Needs It

The dividends are of little concern here. Stag came into the year guiding for FFO in a range of $1.86 to $1.92 per share, and it’s projected to pay out $1.44 in dividends. A sub-80% FFO payout ratio on the low end? That’s excellent coverage for a REIT, and nothing in its guidance suggests that Stag will need to consider scrapping the payout for now.

My biggest real concern comes once economic growth returns. I’ve said before that Stag’s business mix isn’t conducive to high growth in a normal environment, and that still stands. It’s fine, but we can find better options.

Pembina Pipeline (PBA) is a Calgary-based pipeline operator that’s been in business for more than six decades. Its pipelines transport a variety of hydrocarbon liquids, but the company also boasts gas gathering and processing facilities, as well as an oil-and-nat-gas infrastructure and logistics business.

Pipelines typically are considered less vulnerable to oil-price fluctuations than energy producers because their business isn’t as anchored to the actual price of the commodity. Instead, they’re effectively toll takers that make money based on how much of those hydrocarbons are passing through their infrastructure.

That’s true to an extent. But when oil prices are scraping the bottom of the barrel because of anemic global demand, pipelines still have a problem.

What gives me hope that Pembina will keep its monthly dividend flowing? For one, a 20-year dividend history with no cuts that covers several energy crunches, and nine consecutive years of growth. That’s not an inconsequential track record to defend.

But more importantly, Pembina took early and drastic action to get its finances in line. In mid-March, the company deferred numerous expansion projects to cut its planned capital spending by about 40% to 50%. Moreover, the company points out that 85% of last year’s adjusted EBITDA was from long-term, fee based contracts, “approximately 62 percent coming from cost-of-service or take-or-pay contracts with no volume or price risk.”

Then in early April, the company announced it had entered into an $800 million unsecured revolving credit facility—and announced its April dividend in the same release.

There are no guarantees in the energy sector right now. In fact, just a few days ago, Pembina confirmed an unspecified number of layoffs. But PBA and its suddenly monstrous yield might be worth a flyer here. 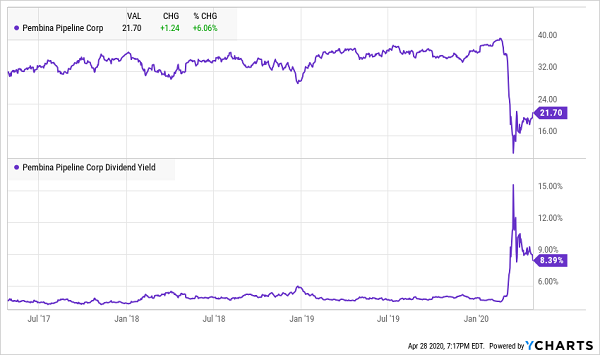 I’ve long touted Main Street Capital (MAIN) as the cream of the weak crop that is business development companies (BDCs). Now we’ll see just how true that is.

Will Main Street Get Back to Lapping the Industry? 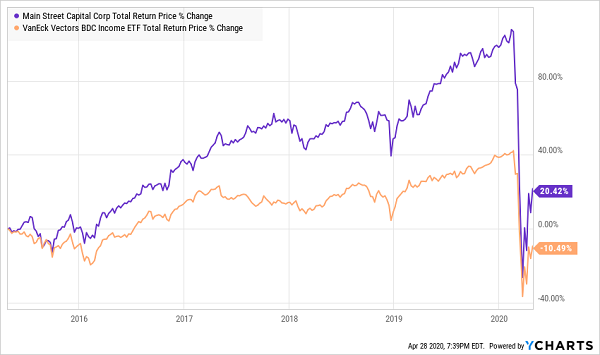 BDCs, as a quick reminder, are similar to REITs in that both are required to pay out 90% or more of their taxable income as dividends to shareholders. But whereas REITs were created to allow retail investors to get a bite of real estate, BDCs were created to encourage financing for small businesses.

Main Street has done exactly that, providing financing to more than 200 private companies since its founding in the mid-’90s. It provides “one-stop” debt and equity capital—common equity, preferreds and various debt structures—for companies looking to either grow or transition.

Most importantly to income investors: The dividend looks OK for the next two quarters. Mostly, that is.

Main Street’s board has declared 61.5 cents in regular monthly cash dividends for Q2 and says management expects to recommend the same for Q3. No cuts there. That’s the good news.

However, Main Street is projecting distributable net investment income (DNII) of 59 to 61 cents per share for the first quarter. It hasn’t provided guidance looking further out, but it’s likely that MAIN is committing to at least six months of dividends that won’t be covered by DNII.

Moreover, what Main Street’s announcement omits is any mention of its special cash dividend, which the company typically pays out semiannually, in June and December.

You can safely assume that’s out of the picture this year.

When a blue chip like Main Street Capital will struggle to make its dividend commitments, the investing landscape is as bad as it can get.

And that’s the problem facing investors just like you: You’ve been told all your life that when the going gets tough, you should double down on blue chips. But this time around, blue chips aren’t the answer.

The key to saving your retirement—with safe annual income of up to 15%—is with my “Dream Retirement Portfolio.”

The global coronavirus pandemic isn’t just creating unprecedented health risks to millions of Americans, especially Baby Boomers and retirees. It’s destroying wealth at a once-in-a-generation rate. Just look at the damage that has already been done in a couple of months:

A market like this could leave even seasoned investors paralyzed, unsure of what to do next. Many investors have already thrown in the towel and gone to cash.

But you don’t have to let Wall Street’s conventional wisdom destroy your nest egg just like it did a decade ago.

This time, you can go on the attack with my “Dream Retirement Portfolio” – a three-part set of buys AND sells that will help you clean house and put you ahead of your original retirement timeline. I’ll show you…

I know it’s bad out there. And I know how difficult it is to take any action when you’re not sure what disaster is waiting around the corner.

But these three steps, which you can put to work right away, will transform any underperforming, income-light retirement into a perennial cash machine that will deliver the goods in any market cycle.

Every day you wait to take action could be another month of retirement that goes unfunded. Click here for details on my Dream Retirement Portfolio. You’ll discover the 12 widely held high-yielders stocks to sell immediately, 4 contrarian income investments yielding up to 15%, and the names and tickers of these “Warren Buffett bonds” – absolutely risk free!