Remember two months ago? The S&P 500 was hitting record highs daily—and stocks were looking at a hefty 9% gain on the year.

It feels like a dream! Because here’s where we are today: 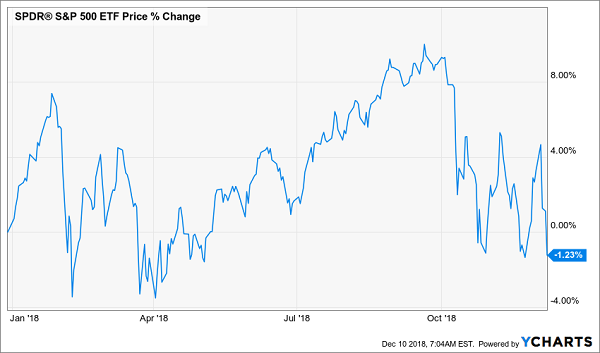 Now we find ourselves down 10% from those highs and staring down the real possibility of a negative year for stocks.

If this has left you feeling a little shaken, you’re far from alone.

My take? Tough as it is, resist the gut-driven urge to sell, because this is a buying opportunity. (I’ve got 2 dirt-cheap funds throwing off 7%+ dividends that are perfect buys for the coming rebound. More on those in a moment.)

Because the truth is, we’ve been here before—and not that long ago, either.

If you think back to late 2015, we were in a very similar spot to the one we’re in now, with interest-rate tensions causing a massive selloff. Although there were no trade tensions then, there was something much worse: falling corporate profits.

Faced with those two worries, the market panicked: 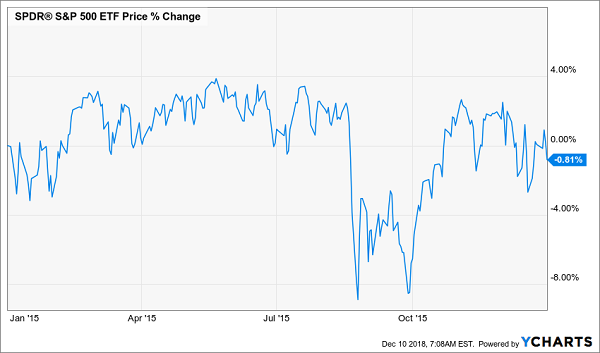 The year-end decline we saw in 2015 started a bit earlier than it has this time around, and was both more dramatic and longer lasting. Investors who panicked and sold lost out on this return in 2016:

The Cost of Giving in to Fear 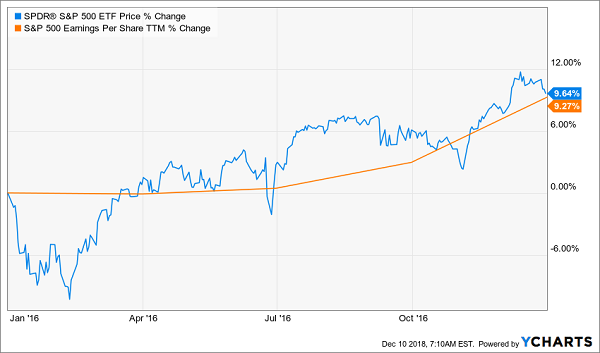 The lesson? Those who bought when earnings were getting stronger and saw weakening prices as an opportunity as opposed to a threat earned a strong long-term return. Those who were scared lost out.

Now let’s look at 2018. Third-quarter EPS numbers aren’t in yet, but since earnings have risen 20% so far for the quarter, the trend in the chart below will likely continue: 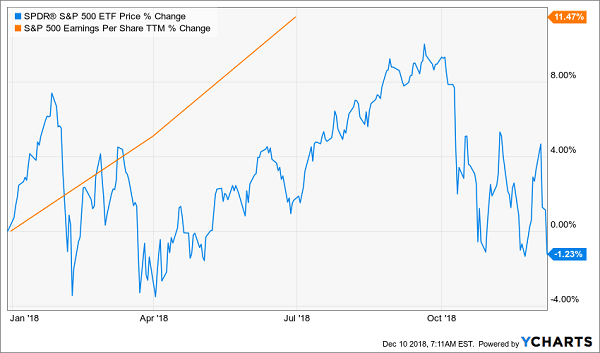 As you can see, EPS continues to substantially outperform prices at a bigger and bigger rate, raising the same question for investors: do you see the price weakness and strong earnings growth as a threat or an opportunity?

A Word About the Trade War

Here’s another reason to be bullish: the two reasons why stocks are selling off are short-term noise and not long-term trends.

First, let’s deal with the trade war. While there is a real risk that the US and China will fail to come to a resolution, even if that comes to pass, we won’t see economic Armageddon—at least in America.

Right now, Trump’s tariffs affect $250 billion of Chinese goods and effectively cost Americans $32.5 billion per year in extra costs (this is assuming the tariffs are entirely passed down to American consumers, although in reality it’s much more complicated). Since America’s GDP is about $19.8 trillion, that means the tariffs currently drag down the GDP by a whopping 0.16%.

The real fear is that the tariffs will increase to 25%, driving their total cost up to about $62.5 billion—but, that’s still less than a quarter of a percent of the country’s economy.

But it’s getting more than tiny coverage in the Trump-obsessed media cycle and hyperpartisan times we live in. And many on the left and right are losing sight of the math, and the reality, due to their biases.

Those biases are spilling into the markets. We’ve seen GDP growth continue at about a 3% annualized rate for 2018, with corporate earnings at record highs and unemployment staying low. While the tariffs have no doubt strained some industries, they haven’t caused the American economy to suffer in meaningful ways.

So if that isn’t a risk—what about interest rates?

Interest rates have gone up 3 times in 2018, with a 4th hike mostly expected at next week’s Federal Reserve meeting. This has resulted in a very flat yield curve and a tiny spread between 2-year and 10-year Treasury rates—while 2-year and 5-year rates have no gap between them (and were actually briefly inverted in recent weeks): 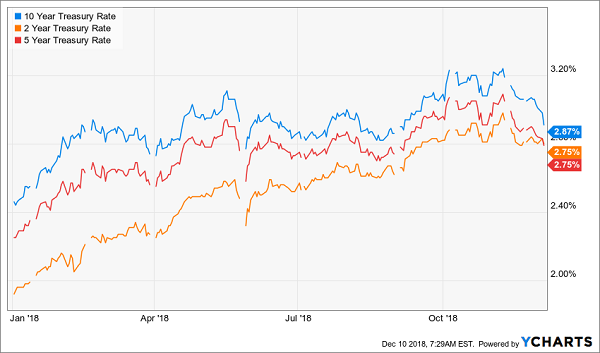 Plus, there’s chatter over whether an inverted yield curve really will mean a recession this time, since the economy is so different than it was in the past. That could mean a bear market in stocks won’t show up for 2 years—or longer.

This is our opportunity as contrarian investors.

Because we still have a couple years before a recession is likely—and it could easily come much later, given the strength in earnings, consumer spending and employment. So anyone who avoids stocks now will miss out on a lot.

Just how much? We could easily see equities go up 47% from current depressed levels, like they did a few years ago when another “big crisis” (remember the US debt-default panic of 2011?) turned out to be a nothingburger:

Market Relief Is a Profit Opportunity 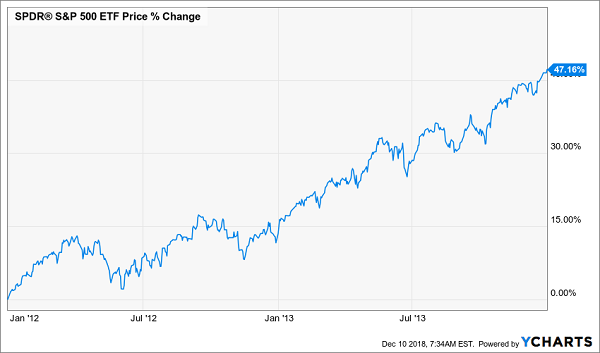 The bottom line? If you follow the fundamentals and buy cheap earnings despite the chicken littles selling around you, this is the kind of chart you could be getting in front of right now.

While you could set yourself up for 2019 profits with the S&P 500 ETF (SPY), there’s a better way to go about it. The secret is to get a closed-end fund (CEF) that has a high dividend yield and high discount. (If you’re unfamiliar with CEFs—many of which boast dividend yields of 7% and up—click here for a quick primer.)

CEFs are a superior play for 2 reasons. First, they let you buy stocks cheaper than you’d get them through an index fund. Second, you have the option to step back from the market or reinvest, thanks to the steady high dividends they give you.

So which CEFs are best for this? The Dividend and Income Fund (DNI) and Eagle Capital Growth Fund (GRF) are both appealing options. With mandates to invest in many S&P 500 stocks, they have solid portfolios and pay a 7.5% dividend (for DNI) and 7.3% dividend (for GRF). You can choose to take those payouts and keep them in cash if the market recovers quickly, or you can reinvest them and double down if you think there’s more upside ahead.

I haven’t even mentioned these funds’ discounts. 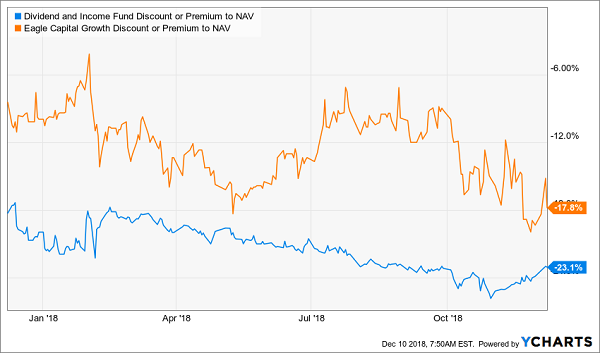 DNI is currently trading near its lowest discount to net asset value (NAV, or the value of its underlying portfolio) in the last year, but a recovering trend has started to kick in.

Similarly, GRF’s discount has widened steadily over the last few months to reach its lowest point in a year. When market relief appears and turns into euphoria, you can expect DNI’s discount to return to its previous 17% level, giving you a nice 6.9% capital gain on top of whatever NAV returns you get from higher stock prices.

And GRF? When its typical 5% discount returns, you’ll see a 15.6% capital gain on top of NAV returns. And that’s on top of the 7%+ dividends you’ll be earning along the way.

A short-term pop is always welcome, but if you’re investing for the long haul, it’s the steady drip, drip, drip of gains (and dividends) you want to see year after year.

That’s why I released my top 4 CEFs to buy now. These 4 powerhouse funds pay outsized 7.1% dividends, on average, but that’s just the start …

… because each and every one is trading at a ridiculous discount to NAV that just can’t last. That gives you critical downside protection in a market like this. And when stocks turn higher, these 4 elite funds’ markdowns will snap shut, “catapulting” us to market-crushing gains.

An Extra Layer of Safety

The discount is just one “safety valve” you get in this exclusive 4-fund “mini-portfolio.”

Another? Incredible diversification: these 4 funds spread your nest egg out across just about every high-yield play out there: blue-chip stocks, bonds, real estate investment trusts (REITs) and floating-rate loans among them.

Full details on ALL of these 4 ironclad income plays are only a click away, and I can’t wait to show them to you. Go right here to get everything you need to know about each and every one: names, buy-under prices, dividend yields, tickers and more!