The point of a bear market is to bring price-to-earnings (P/E) ratios back down to earth. Preferably into single digits.

I like P/Es under ten because it means that the company at least has a chance to pay us back within a decade. Give me a P/E of eight, a business I’m comfortable with and I’ll happily wait the eight years.

Bonus points if I can get paid to wait, which is where dividend stocks come in.

Thanks to this unfolding bear market, we finally have discounts in High Yieldland. We recently chatted about five cash flowing bargains, and here in just a minute, we’ll discuss another five.

The major market indices have finally bounced. It’s still been an ugly year, and that’s just fine with us value-minded dividend guys and gals. This helps bring valuations into reasonable territory. 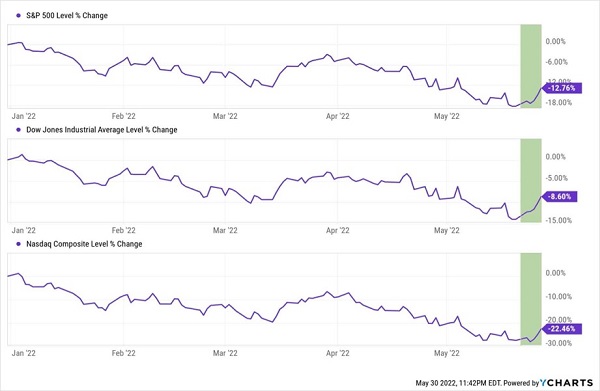 Parts of the market are now cheap. Here are five such companies, with single-digit P/Es and yields between 4.9% to 6.1%.

Discount department store Kohl’s (KSS) is a relative rarity on Wall Street: It’s a retailer that is both dirt-cheap and yielding a far-above-industry average 5%. And that latter point is thanks to a dividend doubling at the start of 2022.

But the curb appeal ends there.

Part of the reason why Kohl’s is trading so cheaply is because of a nearly 20% year-to-date decline on weakness in the underlying business. Its first-quarter earnings, out in May, plunged to 11 cents per share from $1.05 in the year-ago quarter, and were far below Wall Street estimates. The retailer also ratcheted down its sales, margin and EPS guidance for the full year.

Kohl’s difficulties stem somewhat from its product mix. Namely, Kohl’s sells things—clothes, kitchenware, bedding and the like. But right now, consumers are being pulled in other directions, with some money heading toward more staples purchases amid higher food and basics costs, while other consumer dollars are heading toward what’s expected to be a monster travel season. This trend has been murder for Kohl’s, and could be for some time. 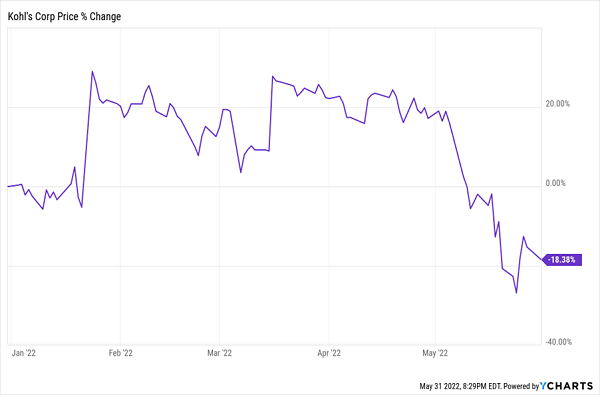 You’ll note that shares have enjoyed several sharp rallies in the midst of its 2022 bear run. That’s because Kohl’s is front and center in the M&A rumor mill—most recently, the company has requested that potential buyers submit their bids within the next few weeks.

That makes KSS shares almost impossible to dismiss entirely, as a buyout pop could be coming at any time. But it also means Kohl’s is almost certainly not a long-term income solution.

Like many “dirty” energy companies, Civitas is looking for ways to green itself up. It claims to be the first carbon-neutral E&P operator in Colorado, and admittedly, some of its methods are clever by industry standards. Consider this example, from Reuters:

In a Denver suburb, an oil drilling rig plumbs the earth near a wealthy enclave framed by snow-capped mountains. The site is quieter, cleaner and less visible than similar oil and gas operations. It might just be the future of drilling in the United States.

Oil firm Civitas Resources designed the operation to run largely on the city’s electric grid, eliminating daily runs by more than a dozen diesel fuel trucks. The electric rig has none of the soot or sulfur smell of diesel exhaust and is muffled enough that rig hands can converse without yelling.

Civitas doesn’t have much of an operational track record to lean on, but what’s promising is how the firm manages its money. The company has a mere 0.2x net leverage and “minimal midstream commitments.” Meanwhile, it offers a base-and-variable dividend program—a 46.25-cent-per-share base payout that it augments with variable dividends as its results allow.

Admittedly, the base yield stands at a modest 2.3%; it’s the variable yield (based on its most recent payout) that bumps it up by another 3.8 percentage points into the 6%-plus realm. So it’s difficult to depend on Civitas if you have a strict retirement income plan…but if you’re a younger investor simply building toward the future and want to diversify with some income producers, it’s hard to argue with its bargain-basement price.

Like the rest of the housing industry, MDC Holdings went bananas in the wake of the COVID crash. Homebuilders couldn’t keep up with the massive ramp-up in demand as city dwellers rushed for the suburbs and exurbs.

MDC More Than Tripled Out of the Market Bottom 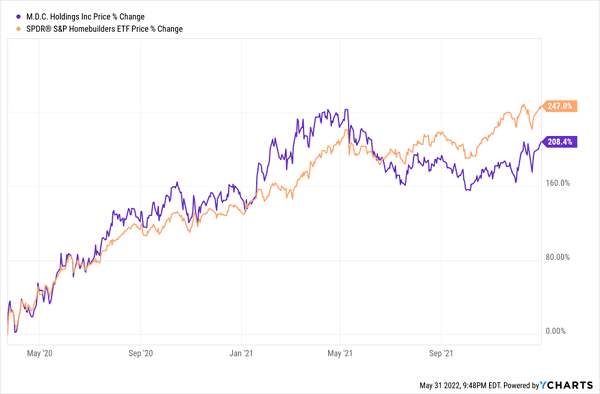 Also like the rest of the homebuilding industry, MDC has been yanked back down to earth in 2022. The Federal Reserve’s signaling of rapid interest-rate hikes has sent mortgage rates booming, and the housing industry is showing signs of cooling, as planned.

MDC Has Lost One-Third of Its Value This Year 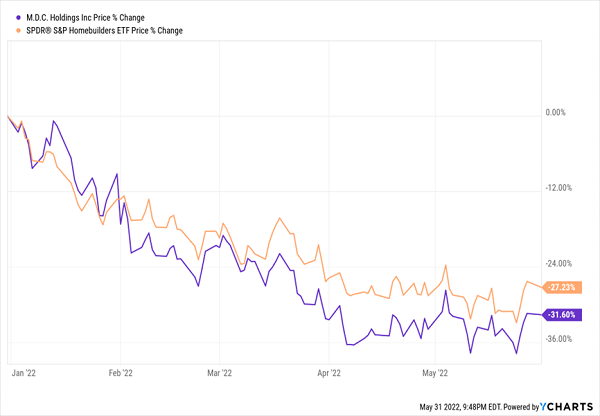 But this very well could be a baby-and-bathwater situation.

MDC still has ample pricing power, which has its margins on track to set multi-decade highs—soaring mortgage rates and all. And just a few weeks ago, I was treated to one of the most urgent pleas I’ve ever seen an equity researcher make toward his researchers, backed by a staggering valuation stat. From Raymond James’ Buck Horne (emphasis mine):

Housing is a cyclical industry, so MDC will be downright painful to hold at times. But the fat 5%-plus dividend will help calm plenty of jitters.

Now, here’s a name just about everyone should be at least mildly familiar with.

Rent-A-Center (RCII) is a rent-to-own industry leader that allows people with less-than-perfect credit to gradually pay their way to furniture and appliances from the likes of Ashley Furniture, Whirlpool and Samsung—not to mention the company’s own unique brands—across 2,000-plus stores nationwide.

You’d think higher consumer prices would result in more traffic to Rent-a-Center, where consumers could spread out the pain over multiple payments. But that has hardly been the case. RCII shares are off more than 40% year-to-date, with the lion’s share of that coming after a dreadful Q4 report in February.

RCII Ripped a New One in February 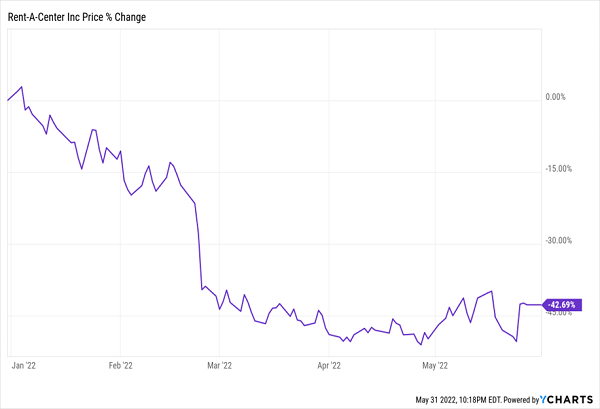 But the precipitous drop in RCII shares has brought the stock into deep value territory of just about 5 times earnings expectations. And there are a few silver linings shining through. Rent-a-Center topped Q1 earnings and revenue expectations. It still generates significant free cash flow $189 million in Q1 2022 vs. $124 million in Q1 2021) and its measurement of “first payment missed” has been on a steep decline since the start of the year.

A nearly 5% yield sweetens the pot while investors wait for a turnaround to emerge.

Hanesbrands (HBI) is another well-known name, responsible for its namesake Hanes brand, as well as Champion, Playtex, L’eggs, Wonderbra, Bali, JMS/Just My Size and several other apparel brands.

It’s also another stock just getting rocked on in 2022, with Wall Street’s sellers dinging it up to the tune of about 30% so far.

Hanesbrands Is Getting Pantsed 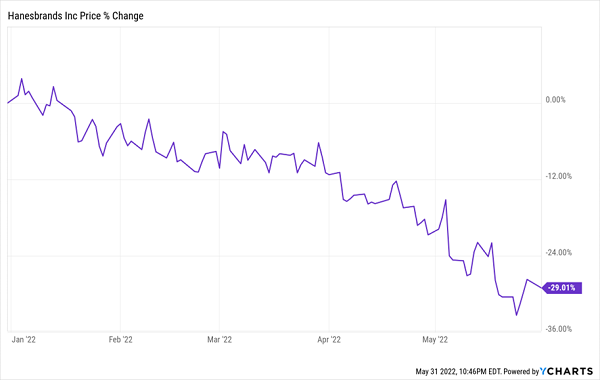 For one, Hanesbrands has been dealing with supply-chain issues since the start of the pandemic, and in turn has been forced to slash its product offerings by roughly a third in that time. Meanwhile, existing brands such as Champion have seen what growth they are experiencing clipped by further supply-chain problems.

Consumer spending trends are problematic, too. As mentioned before, inflation is sending more consumer dollars into staples purchases—in fact, Walmart’s observation of this, as well as rapid expansion in inventories, triggered downgrades in HBI and other apparel names.

It’s a temporary issue, sure, but there’s little indicating that HBI is near the end of its short-term troubles. And despite a nice price and a fat yield, income investors should be wary of a dividend that has remained stagnant since 2017.

The market’s recent downturn hasn’t done investors many favors, but it has had at least one screaming benefit:

It has momentarily nudged some of the market’s best high-yield dividend names back into “BUY NOW!” territory.

My “Perfect Income” portfolio features some of the most generous, yet stable, dividend investments I’ve found. The only problem: In normal market conditions, they tend to trade at lofty valuations thanks to their clear performance potential. But every now and again, when the market throws a fit, Wall Street throws the baby out with the bathwater and gives us a chance to buy even more on the cheap.