Bargain-Hunt the Selloff the Smart Way With These 9%+ Dividends

If you’re looking for 9%+ dividends and an income stream you can retire on without selling shares from your portfolio, closed-end funds (CEFs) are handing you a superb opportunity now.

That’s because this selloff has set us up with bargains in the space, including many CEFs (like two we’ll profile below) throwing off 9% and even 13.7% dividend payouts.

My CEF Insider members know I’m enthusiastic about picking up CEFs at these levels, so long as you’re investing for the long haul and can deal with more volatility, as there’s likely to be more before stock markets ultimately find their footing.

A Glimmer of Hope From the Fed?

The good news is that last week we got word that we might get an earlier reprieve from rate hikes than previously thought. That, in turn, could mean an earlier—and more sustained—rise for stocks (and stock-focused CEFs).

It’s no secret that this selloff is all about the Federal Reserve’s rapid pivot toward aggressive rate hikes to reel in inflation. That—and the central bank’s plan to lower its balance sheet—are draining liquidity from stocks, hence the selloff.

The Fed’s Balance Sheet Inflates. Next Move: Down

But this has all been priced into stocks at this point. So it follows that any move away from rate hikes would remove a big overhang on the markets, setting the stage for another run higher.

And a little-covered quote from Raphael Bostic, the president of the Atlanta Federal Reserve, could be hinting that another pivot, toward a less aggressive policy stance, isn’t that far off. Bostic, who is close to Fed Chair Jerome Powell, recently spoke to the Rotary Club of Atlanta, where he said that the Fed might be moving too quickly on rates.

Here’s what he said: “I have got a baseline view where for me I think a pause in September might make sense. After we get through the summer and we think about where we are in terms of policy, I think a lot of it will depend on the on-the-ground dynamics we are starting to see. My motto is observe and adapt.”

To be sure, one speech from one Federal Reserve member isn’t enough on its own to change the central bank’s course. But Bostic is worth paying attention to, due to his close relationship with Powell. His pragmatic, common-sense approach could hold sway, especially if inflation continues to trend lower in the next few months.

We have seen some indications of that of late, like in the latest read of the personal consumption expenditures price index (PCE), the Fed’s preferred inflation measure. The PCE rose 4.9% from a year ago in April. That’s still high, but it’s up just 0.2% from March and well below the 0.9% month-over-month rise from February to March. 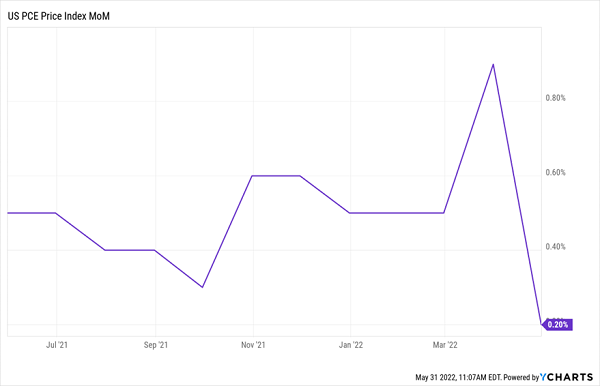 The bottom line here is that there’s good reason to add to your positions now, especially if you’re shopping in the CEF bargain aisle.

Here are two CEFs to consider.

One of the biggest bargains in CEFs today is the BlackRock Innovation and Growth Trust (BIGZ), which trades at a 13% discount to net asset value (NAV, or the value of its portfolio) and yields an eye-popping 13.7%. 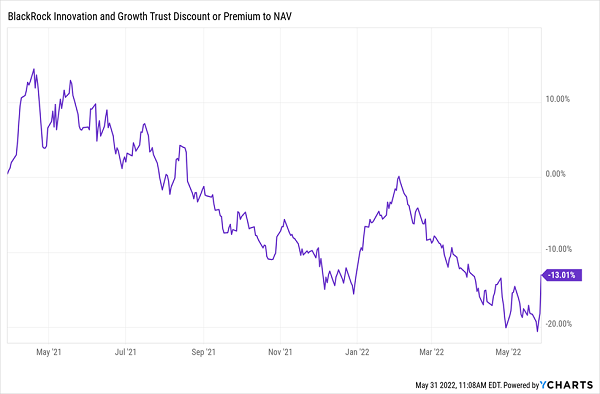 Those big numbers are the result of the fund holding mainly smaller tech stocks, which have been hit hard in the selloff. Top holdings include as Entegris (ENTG), a supplier to the semiconductor industry; Bio-Techne Corp (TECH), which supplies instruments and other products to pharma firms; and Axon Enterprise (AXON), a maker of software for law-enforcement and military clients.

To be sure, these are more speculative picks, and BIGZ is a young fund, having just launched in March 2021. But it does have the backing of BlackRock, the world’s largest asset manager, with $7 trillion in its care, so we can be sure we’re being guided by knowledgeable experts with a deep toolbox of research assets.

And here’s an added measure of strength: the fund has kept its dividend (which is paid monthly) steady through the COVID crash, as well as the 2022 pullback.

Our second fund is the Liberty All-Star Growth Fund (ASG), which is more diversified than BIGZ. Sure, 29% of its portfolio is in technology, but that’s offset by large holdings in healthcare (20%), industrials (13%), consumer discretionary (12%) and financials (10%), among others.

It also sports a decided tilt toward the big names, with Visa (V), UnitedHealth Group (UNH) and Microsoft (MSFT) among its top holdings.

Best of all, you can pick up ASG with a 9.5% dividend now. One thing to bear in mind, however, is that the payout does fluctuate with ASG’s NAV, with management aiming to pay distributions equal to about 8% of NAV per year.

Another plus? ASG uses almost no leverage, so if you’re worried about rising borrowing costs hitting CEFs, you can set that fear aside with this fund.

One final thing: ASG does trade at a modest premium of 2.9% as I write this, but that’s still lower than the 3.8% at which it’s traded, on average, over the last 52 weeks, so we’re still getting a deal here, just not quite as great of a deal as we would if that premium were a discount.

Many folks miss out on CEFs, wrongly thinking that they’re too complicated. But that’s far from the truth. You can buy CEFs on the public markets, just like stocks.

The key difference? Instead of scraping by on the average S&P 500 yield of around 1.5%, you can buy CEFs that hold the same blue-chip stocks but yield way more, 7%, 9%, even north of 10% like BIGZ, above.

Many established CEFs also boast terrific records of delivering strong profits in the long run, including the 5 funds I’ll show you right here. They yield 7.9%, on average and trade at attractive discounts now, too.

Click here and I’ll share my CEF investing strategy with you and show you how to access my research on these 5 high-yielding funds, including their names, tickers, discounts and dividend yields.