If you want to live off dividends in retirement, you can’t depend on “blue-chip stocks.” They simply haven’t paid enough yield for years:

And bond investors aren’t doing much better. The Bloomberg Barclays US Aggregate Bond Index yields just 2.1% at the moment: $21,000 on a million bucks, or $10,500 on half a million. Not enough.

Indeed, several popular income vehicles are now offering a mere pittance thanks to a run-up in prices, making right now a horrid environment for retirement investors looking for anywhere to put new money to work toward a secure post-career life. 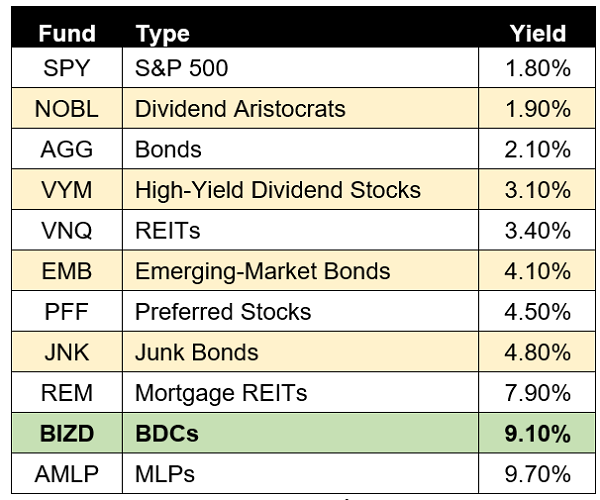 But, as you can see, not all is lost. A few niche areas of the market offer downright powerful income potential.

I can’t in good conscience tell you to explore master limited partnerships (MLPs) right now. Not only is this corporate structure a massive tax headache, but most of them invest in energy assets—a volatile area of the market with constantly changing prospects. The nearly 10% yield in MLPs right now, for instance, reflects a beatdown in oil and natural gas prices thanks to shaky global growth and coronavirus fears. And there’s always another scare over the horizon.

But business development companies (BDC) can be worth a look, if you are willing to be an active investor. These aren’t “buy and hold forever” dividend stocks, but they can be profitable if you get the timing right.

Best of all, business development companies operate under rules similar to those of real estate investment trusts (REITs): They must pay out at least 90% of their taxable income as dividends to their shareholders. In fact, it’s not uncommon for BDCs to yield 3x as much as REITs and twice what high-yield bonds do.

Why aren’t these buy and hold candidates? Many BDCs boast big payouts but miserable long-term performance that effectively cancels out much of your income gains. It’s a high-risk, high-difficulty field in which only a few select stocks stand out. There are so many troubled business development companies that I suggest avoiding diversified funds like the VanEck Vectors BDC Income ETF (BIZD) because dozens of losers end up watering down the returns of a small handful of winners.

Instead, let’s dig into individual BDCs. Today, I’ll show you three with gigantic yields of 5.7% to 9.1% so you can better understand this industry’s pitfalls, as well as its powerful payout potential.

Let’s start with a familiar name. PennantPark Floating Rate Capital (PFLT) provides access to middle market direct lending. It should come as no surprise that its preferred lending method is floating-rate loans, though it will and does invest anywhere else across the capital structure, including senior secured debt, subordinated debt and other arrangements.

It likes capital-light businesses, typically those earning $10 million to $50 million in EBITDA, and it purposely avoids “fickle” industries such as fashion and restaurants, where a simple change in consumer tastes can quickly wrench them out of favor. That’s OK. There’s still plenty of diversity here, with portfolio companies including the likes of American Insulated Glass, marketing services provider InfoGroup and Pathway Partners, which provides veterinary hospital services.

I discussed this BDC last July, pointing out that while its investments typically lean low-reward but low-risk, its recent earnings had brought up credit-quality concerns. Good news on that front: Most of those “non-accruals” (businesses that are more than a month overdue on payments) are in the rear-view, the remainder of the portfolio seems to be built with high yields and low default risk in mind, and management appears to have learned its lesson:

“The medicine has been taken, and I’m hoping we can go forth in strength and make PFLT boring again, which is certainly our goal,” CEO Arthur Penn said in PennantPark’s most recent earnings call.

PFLT is building up some positive price momentum, but it’s still trading for a slight 4% discount to its net asset value (NAV) right now. Most good BDCs, such as Main Street Capital (MAIN), tend to trade for a premium, so that—and the 9%-plus yield, of course—make PennantPark an interesting rebound play right now.

PennantPark (PNNT) Is Building Up a Head of Steam 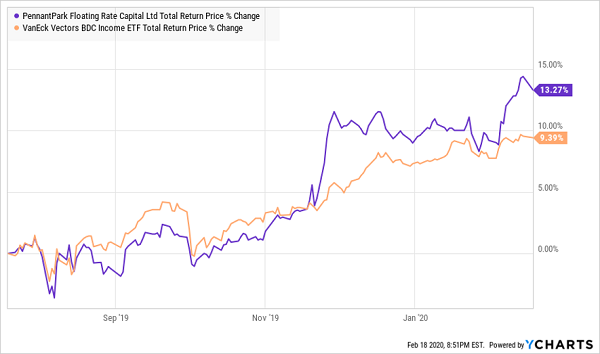 BlackRock Capital Investment Corp (BKCC) is, in a word, flexible. The company likes to compare itself favorably to banks, finance companies and private equity firms, and in a few ways, its points are legit.

This is a busy but selective company. BKCC has made 210 investments (typically between $10 million and $50 million) since it was formed in 2005—out of more than 4,500 opportunities evaluated. At the moment, nearly a third of its portfolio is in diversified financial services, with smaller slivers dedicated to areas such as chemicals (8%), healthcare equipment & supplies (7%) and road & rail (5%).

I want to like this company. After all, few BDCs are as resource-rich as BKCC, which can tap the advisory brainpower of BlackRock (BLK), which manages more than $7 trillion in assets.

But this BDC is a dog. I’ve been bearish on BKCC for years. The company leans toward the riskier side of the space, and its bets have not paid off.

BKCC in a Long-Term Decline 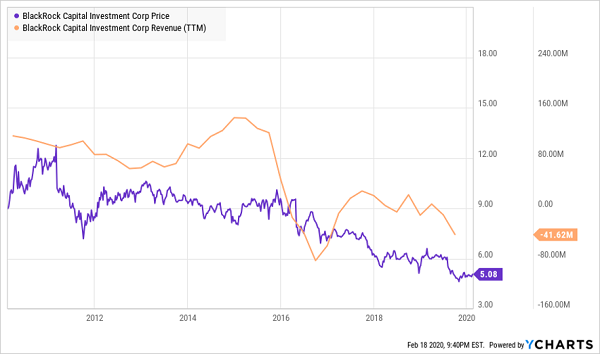 Indeed, the stock is slightly in the red since I first panned it in Nov. 17—a horrendous result given its mammoth yield.

Getting Crushed by a Lame ETF 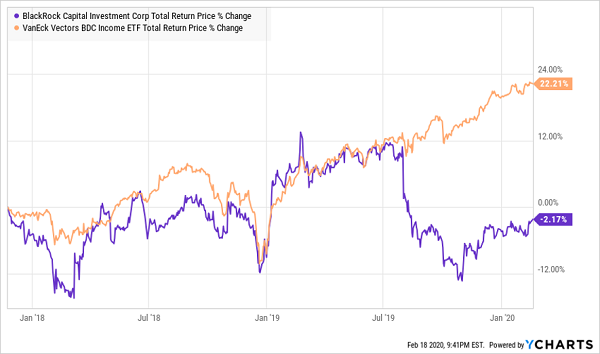 The death blow: BKCC cut its dividend, from 18 cents quarterly to 14 cents, in mid-2019, and that’s just one of several hits the payout has sustained over the past decade.

Nothing here gives me confidence that its woes will turn around soon.

Triangle Capital was, up until August 2018, a BDC serving lower- and middle-market companies. This troubled firm just couldn’t get it right; it was forced to write off bad investments and hacked away at its dividend, much to the dismay of its loyal income investors. I said in November 2017 that CEO Ashton Poole was “looking at all options,” and indeed he did: The company eventually changed its name and ticker a little less than a year later.

But it was more than slapping some lipstick on a pig. The new moniker reflected a new external adviser: global financial services firm Barings, which currently boasts around $340 billion in assets under management.

Barings BDC has since been retooling its portfolio. Total net assets of $572 million in Q3 2019 were about 6% smaller than in Q3 2018, but net investment income from those assets jumped from $3.3 million to $8.0 million. Importantly, no investments were in non-accrual status. Said differently, BBDC doesn’t appear to be sitting on any landmines at the moment.

The company’s dividend, which shrunk from 54 cents quarterly in 2015 to as low as 3 cents per share in 2018, has since been on the rebound. Barings BDC has raised its payout in five consecutive quarters, from 3 cents to 15 cents quarterly. Management is playing things conservatively but showing investors that it clearly cares about re-establishing its income roots.

The Healing Has Begun 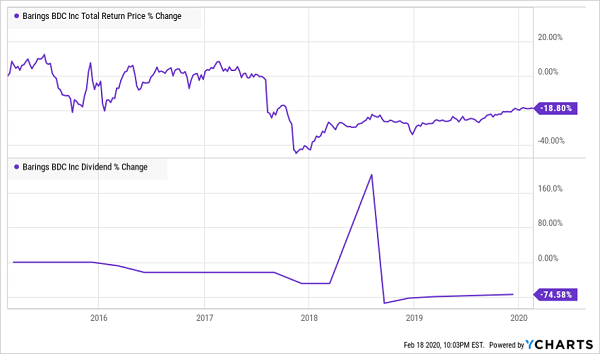 This budding redemption story is cheap to buy into, too. You currently can buy BBDC for about 91 cents on the dollar – a strong discount if Barings is for real.

I wouldn’t go so far as to call Barings “perfect” yet. The stock yields less than 6%, and the company has packed on debt to fuel its turnaround.

It’s a B/B+ underdog stock with some potential. Nothing wrong with that.

But if you’re looking for A-plus-plus income, in companies that can take a hit or two, I suggest you take a look at the winners in my “Perfect Income” portfolio.

Wrong. Merck has been underperforming the market for years, and it’s already dropped nearly 10% in an up year for the S&P 500!

And even if you ignore those losses, consider this: Even if you had a million dollars invested in MRK, you’d only bring home $30,000 in annual income. If you have just $500,000 to work with, you’d only be a couple thousand dollars over the federal poverty level.

The dividend-rich stocks in my “Perfect Income Portfolio” deliver the kind of income you need to be able to afford your mortgage, the bills, the healthcare costs, and all the extras that retirees have worked so hard to enjoy – without  having to rely on once-in-a-generation bull runs to keep a batch of mediocre holdings afloat.

But my readers are locking down double, triple, and in a few cases, quadruple the income they were generating from their old income portfolios. And they’re doing it without screwing around in complicated options strategies, high-risk swing trades or forex scams.

It’s just simple buy-and-hold investing. I provide you with a set of tickers from under-the-radar, contrarian income plays that can quickly build your wealth. If the stock is below the buy-under price, you pull the trigger.

That’s it. And I’ve got the receipts to back it up.

Check out this strategy’s past 10 years of returns, and you’ll see why I call it the “Perfect Income Portfolio.” 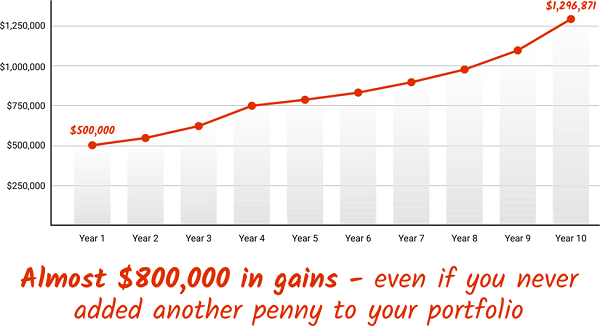 Don’t lie awake anymore worrying about your yo-yo-ing net worth. Instead, let me teach you more about this incredible strategy, including its dominant track record. In fact, I’ll let other investors tell you about the market-smashing gains they’ve reaped from my research service.