I’m an investor in Invesco QQQ, a fund that gives me access to Nasdaq-100 innovations like volumetric video technology.

My fellow hoops fans watching March Madness are seeing a million commercials for Invesco QQQ Trust (QQQ). They feature flashy camera angles with average investors “dropping knowledge” about the tech stocks they are proud to own via this ETF.

In the spot, the investor humble brags about her “volumetric” video technology investment. English translation: The use of many cameras at different angles to make a sporting event look three dimensional on TV. (Last week, ESPN broadcast a professional basketball game for the first time using this technology.)

In the 30-second spot our QQQ fangirl did not mention the fund’s dividend. Which is no surprise, because QQQ doesn’t pay much. Over the past twelve months, this one-click way to buy volumetric video yielded just 0.5%.

Good luck retiring on dividends with a yield like this. A $10 million stake in QQQ throws off just $50,000 in annual dividend income. Yikes.

I can hear the counterargument now. “But Brett, you’re a software guy. Tech businesses are capital efficient. Wall Street loves that. So don’t we want the QQQs for price appreciation?”

There’s a time and a place to bet on tech appreciation. With the Federal Reserve trying to sop up its monetary mess and calm inflation, profitless tech stocks are going to face challenges. These firms take on debt to keep growing, but their borrowing costs are going up.

QQQ is full of money losers, which is why it’s already down 12% this year. And the Fed has only raised rates once so far—more hikes are on the way, Fed boss Jay Powell promised again on Monday. We could be looking at a volumetric decline in the QQQs before it’s all said and done.

Sure, markets don’t move in straight lines. The Nasdaq is due for a bounce. That said, I still can’t get past QQQ’s offensively low yield.

Let’s say we have “only” a million to invest. I understand that a million bucks isn’t what it used to be, but QQQ only nets us $5,000 in annual dividend income on that million! 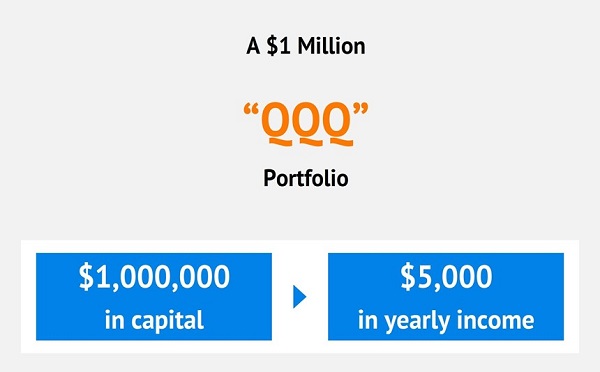 Fortunately, there’s an easy fix. Let’s add an “X” to the end of the popular ticker, and we have a better play.

One that pays, too.

Nuveen Nasdaq 100 Dynamic Overwrite Fund (QQQX) is a fund that sells (“writes”) covered call options on individual tech stocks for additional income. Writing covered calls can be an effective way to generate income, especially in volatile markets like these.

A covered call option is an agreement to buy or sell a stock at a high price. Option premiums are high when stock prices swing wildly. In today’s volatile market, Keith Hembre, QQQX’s portfolio manager, is very happy to buy tech stocks and then sell covered calls on his positions.

It’s how Keith generates a 7.3% dividend. 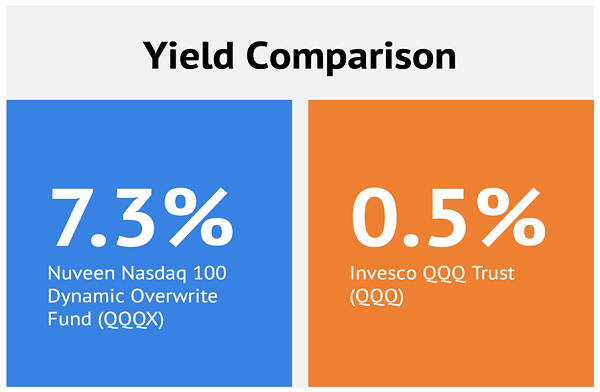 Plus, he doesn’t have to get stuck in the profitless pit of the QQQs. Keith cherry picks his tech positions, and he smartly prefers money makers like Apple (APPL), Microsoft (MSFT) and Alphabet (GOOG). These stocks can do fine as rates rise because they don’t rely on debt.

Keith is a savvy market timer, too. He ups the percentage of covered calls when Nuveen’s indicators look bearish (to protect on the downside) and holds more “uncovered” positions when tech looks bullish (to maximize upside).

My long-time Contrarian Income Report subscribers can attest to Keith’s skill. We had a fulfilling foray with QQQX a few years back, flipping the fund for 42% returns in just 15 months. To play a tech rally, we prefer QQQX because it pays us. 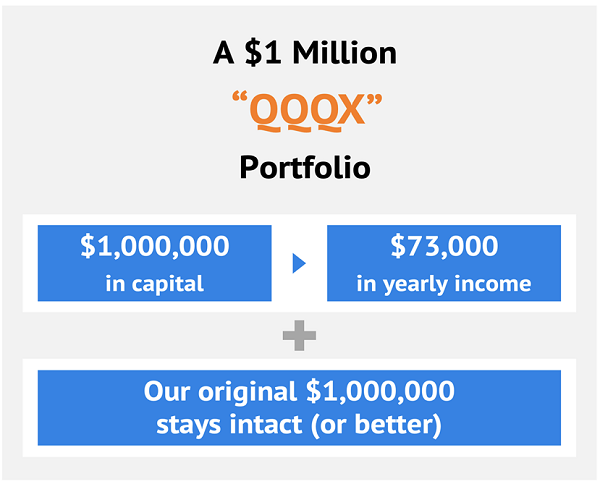 I often get asked about the Global X Nasdaq 100 Covered Call ETF (QYLD). It usually boasts an attractive yield with cheap (cheap for good reason, though.) The ETF yields a sky-high 11.2% as I write.

I often gloss over QYLD intentionally. QYLD is a (relative) loser. Its strategy is sound, but the fund’s execution is lazy compared with Keith and QQQX. I expect more for a 0.6% management fee.

QYLD owns 103 individual tech stocks. If the fund would sell (“write”) covered calls on each of these positions, it would reap nice premiums to support its 11.2% yield.

But it doesn’t. It writes calls on the NASDAQ index itself. This fetches a lower premium. Which generates inferior returns, and forces the fund to “eat” its own NAV in order to deliver its dividend.

Witness that over the last ten years, QQQX has crushed QYLD by a 161% to 89% total return margin. Another lame ETF underperforming its peers.

Another advantage we have with QQQX is that it is a closed-end fund (CEF), which means it will not be issuing new shares along with a successful March Madness advertising campaign. CEFs have fixed pools of shares.

As such, they can (and often do) trade at a discount or premium to their net asset values (NAVs). For the three funds I’ve discussed, their NAVs are the prices of their underlying Nasdaq stocks.

ETFs usually trade at par, because they simply issue more shares to meet demand for their fund. So, on a given day, we can expect QQQ and QYLD to trade for around “par,” or their NAV.

Not so with QQQX. As a CEF it can swing with market sentiment. As I write, the fund trades at a 2% discount to its NAV, which means shares are selling for roughly 98 cents on the dollar.

(Back in January 2017 we were able to snag it for our CIR portfolio at a sweet 6% discount. It was the closing of this discount window and subsequent “pop” to a premium that helped our 42% gains.)

For my fellow contrarians who always demand a discount, let’s keep our eye on QQQX rather than the widely advertised QQQ.

Publisher’s Note: Michael Foster, our “CEF guru,” just released his top 5 monthly paying CEFs. Aside from sending you a payout every 30 (or 31) days, these 5 cash machines yield an outsized 7.9% on average.

That’s not all: these are smaller CEFs trading at big discounts, which primes them for fast upside as the income-starved crowd discovers them and piles in.

We’re forecasting 20%+ price gains in the next 12 months. That’s in addition to these 5 funds’ huge (and monthly) dividends.

Don’t miss out. Go here to get your FREE report revealing everything you need to know about these 5 monthly payers, including their names, tickers, current yields and discounts.