When it comes to dividend cuts, closed-end funds (CEFs) aren’t much different from stocks: investors tend to hit the sell button as soon as a cut is announced, leaving those who hang on with a shriveled income stream and a hit to the value of their investment.

In fact, sometimes a selloff in response to a dividend cut can be worse with CEFs because investors mainly look to them for income, with the average CEF yielding 7.5% today.

This is obviously a situation we want to avoid, which is why I’m writing you now: we’re going to look at two recent CEF dividend cuts to see what they can tell us about dodging said cuts. Then I’ll give you two signs I bear in mind when picking funds for my CEF Insider service. (A quick note: not all CEF dividend cuts are bad—some actually grow your wealth, as we’ll see shortly).

This Popular Fund Had a “Battleship” Dividend (Until It Didn’t)

Let’s start the PIMCO High Income Trust (PHK), a corporate-bond CEF that paid reliable dividends (and even some large special dividends) until late 2015, when it suddenly cut its payout. Unfortunately for PHK holders, this was just the start.

One Cut Leads to More 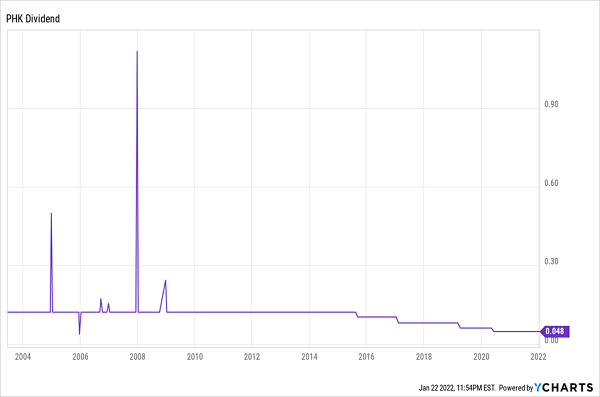 After that, new cuts rolled out almost every year, putting a stop to PHK’s 266% return from its inception in 2003 until the first cut was announced. Since then, it’s trailed the benchmark SPDR Bloomberg Barclays High-Yield Bond ETF (JNK), which most corporate-bond CEFs easily beat because their human managers get the inside track on the best new issues—an edge an algorithm-driven ETF can’t match: 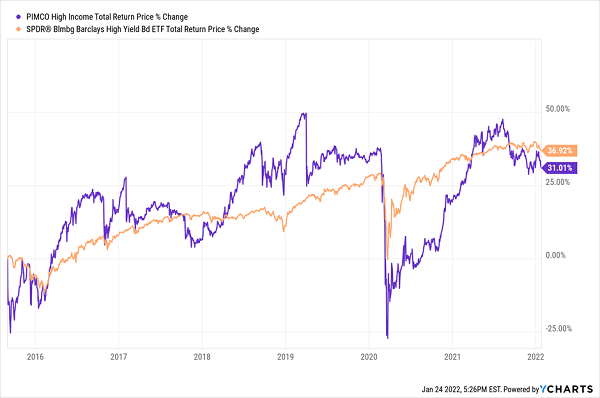 A key takeaway is that the first dividend cut is often the worst. When a fund builds confidence for years by not cutting payouts, response to the initial cut will often be harsh. PHK had a premium to net asset value (NAV, or the value of its portfolio) averaging more than 37% pre-cut. Since then, the premium has averaged 8%. (And PHK’s premium will likely disappear.)

Something else to bear in mind is that CEF investors, who tend to be particularly income-focused, as we know, can become so obsessed with a high yield that they’ll hang on even with a cut. This was the case with the Eagle Point Credit Company (ECC), which is known for having off-the-charts yields (its current yield stands at a ridiculous 28%). When it slashed its dividend by more than half in 2020, investors still rewarded it with a premium to NAV—though a much smaller one than before. 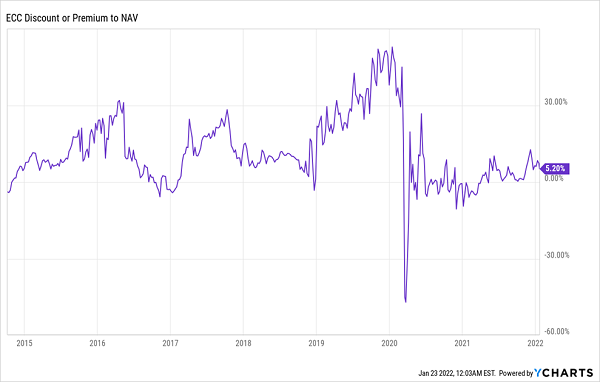 Since that cut, the fund’s premium stayed around 5%, which is down sharply from the long-term 10% average premium. Some folks may see that premium as a sign of value and buy in. But given ECC’s clearly unsustainable 28% yield, the fund should trade at a discount—and a large one at that.

How to Get Ahead of a Cut

A funny thing about CEF dividend cuts is that sometimes we may not want to avoid them. I know that sounds counterintuitive, but hear me out, because there are times when funds will cut distributions not because they have to but because they want to—and this is often a good thing.

For instance, imagine you manage a junk-bond fund and the junk-bond market has fallen, but you’re still bullish on junk bonds in the long term. In that case, you’ll do anything you can to buy as many as possible—and one way to do that is to cut dividends to free up cash in the short term that you can use to purchase them. Then, as your fund’s portfolio rises in value, you increase the payout back to its previous level—and likely higher.

Since ECC cut its distributions in early 2020, was it doing that? The short answer is no. 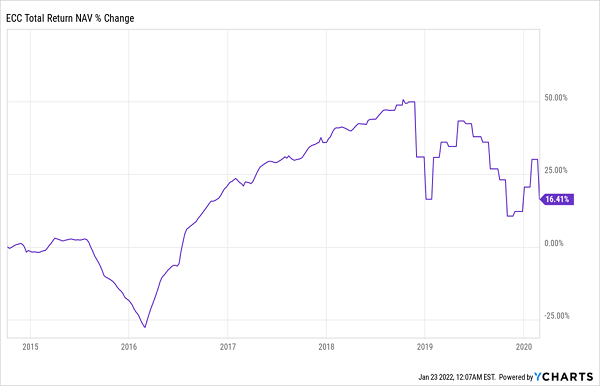 In ECC’s case, we see that the fund’s dividend wasn’t sustainable. With its 20-cent monthly payout, ECC was paying out a whopping 25% yield on NAV (the amount managers actually have to earn to sustain payouts) before it cut its dividend. But as you can see above, the fund had earned less than that over the prior five years!

Another thing to look out for when guarding against CEF dividend cuts is the news headlines, because they can influence management’s decisions. It’s impossible to know how much they affected ECC’s 2020 payout cut, but the timing, at the height of the pandemic and when markets were tanking, did give ECC’s management a window to lower its payout, even though the dividend needed to be cut anyway.

In PHK’s case, the cut came as the Federal Reserve announced that rate hikes were going to start (which they did in December 2015). Again, the cut was necessary, given that PHK’s 12% yield (at the time) was unsustainable, since its yield on NAV was over 15%.

Big Gains, but Not Big Enough 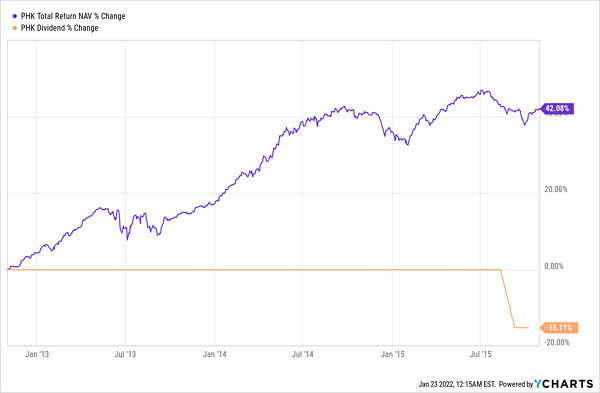 What does this show us? That there are two things to consider at when trying to predict a dividend cut:

And right now, the Fed is looking to raise rates, Omicron is spreading fast and inflation and supply-chain issues are making headlines daily, so there are good reasons funds can use to make necessary distribution cuts. This is why it’s important to choose the CEFs whose payouts are sustainable through thick and thin.

Bankroll Your Golden Years With These 5 Safe Dividends (Yielding Up to 8.4%)

The 5 CEFs I’m urgently recommending now are all dividend workhorses, with safe payouts yielding 7.4% now, with the highest payer of the bunch throwing off a gaudy 8.4%. That 7.4% average payout is enough to hand you a nice $37,000 yearly income stream on a $500K investment.

PLUS, these 5 CEFs are rare bargains—so much so that I’m forecasting 20% price gains from this 5-fund “mini-portfolio” by this time next year. That would add another $50,000 in gains to your $37,000 in dividends!

Full details on these 5 “ironclad” CEFs are waiting for you now. Click here and I’ll give you all the critical data you need—names, tickers, complete dividend histories, buy-under prices and more.