It’s the most common rule in investing: if you want to cut your risk (and protect your dividends!), you need to diversify.

Yes, we’ve all heard it before, but what most people don’t get is just how much you can damage your finances by not sticking with it—or, conversely, how much you can reap in gains (and safe dividends) by following a smart diversification strategy.

I’ve seen this play out firsthand; a friend was an early employee at a social media startup that got a big investment from a tech billionaire. Instantly, his net worth shot up to nearly $1 million. The only problem was that his net worth was tied up in equity with his employer, which meant that when the company folded a couple years later, his net worth dropped by a million bucks!

I feel bad for my buddy; he didn’t have a way to avoid his fate, since he couldn’t sell his shares in the still-private company. He learned his lesson; now he negotiates for a bigger salary and saves a lot more of his income, paid in real cash, by putting it to work in the stock market.

The lesson he learned is something most people don’t think enough about: diversifying doesn’t just mean investing in a portfolio that’s balanced across economic sectors—it also means buying assets that aren’t connected to your employer.

Consider this hypothetical: imagine an Exxon Mobil (XOM) executive given two offers: the first is a $150,000 annual income with zero equity; alternatively, she can take $200,000 annually, but half of that would come as shares given to her at the end of every year. After five years, which option would make her richer?

Let’s assume that our hypothetical executive uses $100,000 on taxes and living expenses in either case, leaving $50,000 to put into, say, the SPDR S&P 500 ETF (SPY), which has representation from across the S&P 500 index, for the diversified strategy and $150K total income. Our $200K earner would put $100K in Exxon shares yearly. Who would have more money at the end of five years (for this exercise, we’ll use today’s prices as stand-ins for the end of 2020)? 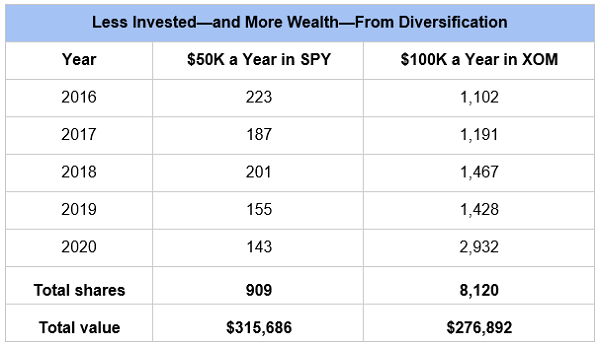 After five years, the diversified portfolio is worth nearly $39,000 more, even though this investor has saved $50,000 less per year! Diversification has made her richer and put this portfolio in a much safer position.

Of course, this doesn’t apply to every executive at every company; some firms have outperformed the S&P 500 for a long time. But we know that now, not before it happened.

While Amazon.com (AMZN) might crush the market for the next five years, it might not—and since there’s no way to know, the safer bet would be for Amazon executives to put their eggs in many non-Amazon baskets, especially if the specter of regulation and antitrust breakups keeps hanging over the company’s head.

Executive or Not: Divest From Your Work

This principle doesn’t just go for high-paid executives; everyone needs to diversify from their jobs to make sure they aren’t dependent on a single cash flow from a single source, especially with the spike in unemployment we’ve seen in 2020.

Imagine a restaurant manager earning $45,000 a year after tax whose employer will lay him off as of the end of this year. The manager is then faced with a precarious job market where millions of other laid-off workers are competing for still fewer jobs than we had before the pandemic hit.

That’s obviously a dangerous position to be in.

But the manager who diversified his cash flow by investing in a high-yielding diversified closed-end fund (CEF) like the Gabelli Equity Trust (GAB) would be in a much better position.

If we imagine that employee buying $15,000 worth of GAB every year for the preceding five years (so a third of his after-tax earnings), he’ll have $78,604 in assets (again using today’s prices as stand-ins for the end of 2020). Even more importantly, those assets will get him a $741 monthly income stream, thanks to GAB’s 11.3% current yield. 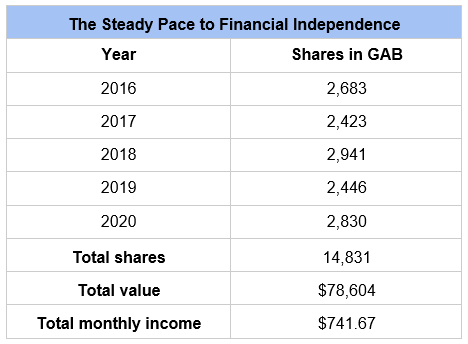 Granted, this savings plan is pretty aggressive. But it means that, in just five years, the laid-off restaurant manager has gone from zero wealth to replacing nearly a third of his income by investing a third of his after-tax income.

GAB makes this possible with a diversified portfolio including large caps like Rollins (ROL), Mastercard (MA) and Berkshire Hathaway (BRK.A), not through high-risk bets in weird derivatives or companies you’ve never heard of. And GAB is just one of many CEFs that does this—getting us closer to financial independence through a diversified basket of assets that generates wealth and a bigger income stream over time.

GAB is a great fund. In fact, it almost made my list of the top CEFs I’d buy and hold forever. The only problem with buying it now is that it trades at a premium to its net asset value (NAV).

That’s another way of saying that the fund’s shares trade for more than its portfolio is really worth. And there’s just no reason to overpay (and cap our upside!) when there are so many bargains in this often-overlooked corner of the market.

This is where the 4 CEFs I have for you today come in. They’re trading at such huge discounts that I’m calling for 20%+ price upside in the next 12 months as these totally bizarre markdowns vanish.

That’s not all, either, because this diversified “4-pack” yields 8.1% today. And those payouts are likely to grow as the economy recovers and their managers borrow modestly at today’s ridiculously cheap rates to goose their gains even further.

This upside-and-income combo is what makes CEFs so appealing, especially now. My 4 top buys (average yield: 8.1%!) are waiting for you. Click here and I’ll give you the whole profitable backstory on each of these 4 smartly run funds: names, tickers, complete dividend histories and everything else you need to know.